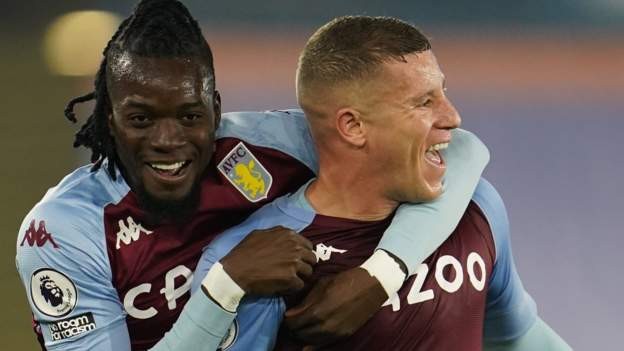 Ross Barkley drilled in an injury-time strike to maintain Aston Villa's 100% start to the season as they edged to victory at Leicester.

The game looked set to be the first goalless match of the campaign, but on-loan Chelsea midfielder Barkley finished incisively into the bottom corner to give Villa all three points and send them second in the Premier League.

Villa have won their opening four top-flight games for the first time in 90 years.

It had been a drab Sunday night encounter until Barkley's 91st-minute effort, with neither goalkeeper called on to make difficult saves.

Dean Smith's Villa are just one point behind leaders Everton with a game in hand, while Leicester remain fourth.

The fixture was a poignant one, as last season's equivalent back in March was the final game staged with fans before the coronavirus-enforced suspension to the season.

Since then fans have not been allowed into stadia - but had a crowd been in attendance, many may have been thinking of an early exit as the contest appeared to be drifting towards a bore draw before Barkley's late intervention.

Villa narrowly avoided relegation last season but have started this campaign in magnificent fashion, backing up their 7-2 dismantling of champions Liverpool last time out with a narrow victory on this occasion.

They have won four Premier League games in a row for the first time since 2009, stretching their unbeaten run in the competition to eight games.

The signing of Chelsea's Barkley on a season-long loan came as a surprise, but it looks to be an inspired acquisition by Smith as the England international has already contributed three goals in five games.

The goal was a superb strike from the former Everton player, striding forward as the Leicester defence backed off before firing a crisp, low drive past the reach of Schmeichel.

Leicester were in the top four for much of last season before falling away after the restart, and they began this term with three straight victories.

But they have since faltered, losing back-to-back games, and rarely looked like finding the net against Villa.

Without the injured Jamie Vardy to call upon up front, Leicester struggled to carve out meaningful chances and Belgium full-back Timothy Castagne and Nigeria forward Kelechi Iheanacho both saw their efforts comfortably saved by Martinez.

Even the introduction of the rarely-sighted Algerian Islam Slimani, making his first Foxes appearance since January 2018 following loan spells away, could not spark any attacking impetus for Brendan Rodgers' side.

Leicester are in Europa League action on Thursday against Zorya Luhansk (kick-off 20:00 BST), while Villa look to maintain their impressive Premier League start when they host Leeds next Friday (20:00).

Villa keep it clean - the stats

Attempt saved. Bertrand Traoré (Aston Villa) header from the centre of the box is saved in the top centre of the goal. Assisted by John McGinn with a cross.

Attempt missed. Matt Targett (Aston Villa) left footed shot from outside the box misses to the right following a corner.

Attempt blocked. Harvey Barnes (Leicester City) right footed shot from the left side of the box is blocked. Assisted by James Justin.

Attempt missed. Islam Slimani (Leicester City) header from the centre of the box is close, but misses the top right corner. Assisted by Ayoze Pérez with a cross.

Attempt blocked. Ayoze Pérez (Leicester City) left footed shot from the right side of the box is blocked. Assisted by James Maddison.

James Maddison (Leicester City) wins a free kick in the attacking half.