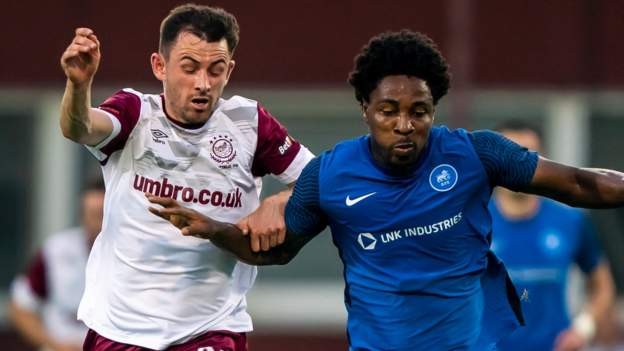 Stephen Fallon opened the scoring for Linfield in the 39th minute

Two dramatic last-gasp goals denied Linfield victory as they drew 2-2 at RFS in the first leg of their Europa Conference League play-off.

It looked like the Blues would take a two-goal lead back to Belfast next week thanks to superbly-taken goals from Stephen Fallon and Joel Cooper in Riga.

However, substitute Kevin Friesenbichler scored a powerful header on 88 minutes before Ziga Lipuscek equalised with the last kick of the game in the 96th minute.

Petr Mares missed an early penalty for the Latvians as they spurned a number of good opportunities to take the lead before Fallon's opener six minutes before the break.

Linfield, playing in a temporary white and burgundy kit, are aiming to make history by becoming the first Irish Premiership team to reach the group stage of a European competition - and secure the 2.9m euro windfall that comes with it.

It was a cruel way for David Healy's men to concede the late equaliser, with 95 minutes originally signalled for injury time before Lipuscek planted a bullet 96th-minute drive from 20 yards through a crowded penalty area and past an unsighted Chris Johns in the away goal to leave the tie delicately poised.

Playing in a 4-5-1 formation with Kirk Millar and Cooper looking to break forward in wide areas, Linfield had to soak up a lot of first-half pressure, but maintained their hosts well in the second half until that late surge.

It was Millar who provided the assist for Fallon's opening goal in the 39th minute, with the winger keeping a deep left-wing cross to the back post alive with a well-controlled cushioned pass inside on the half-volley.

Cooper was a major threat for Linfield down the left

Midfielder Fallon timed his run into the box perfectly and met a bouncing ball to sweep a confident right-footed effort into the bottom corner.

The lively Cooper doubled the visitors' lead in the 71st minute when he made an excellent break down the left and drove into the box before drilling a perfectly guided left-foot drive in off the base of the post.

It was a period of the match when Linfield looked most comfortable, but hopes of going into the second leg with a two-goal lead were ended when Friesenbichler got across his marker at the front post to fire a thunderous header past Johns into the near corner.

Having felt the corner should not have been awarded, Lipuscek's injury-time winner will have felt even more cruel to the Blues players - but the hosts will feel they deserved a draw given the first-half chances they created.

Their penalty miss came in the 18th minute, with Mares dragging his low left-foot spot-kick just wide after his left-wing cross struck the hand of Kyle McClean.

Andrej Ilic had been the first to threaten for them when he just failed to get on to a clever through ball as Johns came off his line well to collect.

Alfusainey Jatta then missed a fantastic opportunity to open the scoring when he allowed Johns to save his close-range effort after Lipuscek had flicked on a left-wing cross.

Just before the half-hour mark, forward Emerson cut inside on a dangerous run from the left before firing a low right-foot shot from just outside the box that went narrowly wide.

Johns had a scare five minutes before Fallon's opener, with the Linfield keeper having to gather the ball at the second attempt after he had failed to hold on to a speculative long-range shot from home captain Tomas Simkovic.

The hosts missed an excellent chance to equalise on the stroke of half-time when Stefan Panic clipped in an inviting cross into the path of Cedric Kouadio who somehow managed to steer it wide from six yards out.

Linfield travel to Newry City on Sunday in their second Irish Premiership game of the season before entertaining RFS at Windsor Park in what is now a crucial second leg next Thursday.

Michael Newberry (Linfield) is shown the yellow card for a bad foul.

Ziga Lipuscek (Rigas FS) is shown the yellow card for a bad foul.

Goal! Rigas FS 0, Linfield 2. Joel Cooper (Linfield) right footed shot from the centre of the box to the high centre of the goal.

Joel Cooper (Linfield) is shown the yellow card for a bad foul.

Can England's Euro 2022 win provide real change for the women's game? The Sports Desk investigatesThe Fab Four's story in their own words: Listen to deeply personal interviews with members of The Beatles spanning 48 years