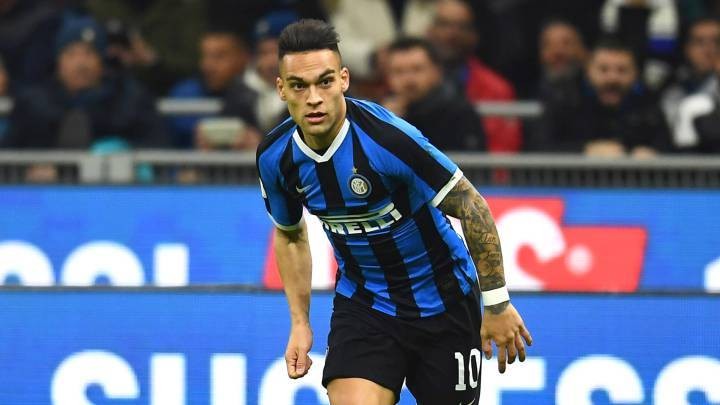 According to reports in Italy, the Camp Nou board have made the Argentina international their top transfer target and will offer €7m a year to land him.

According to reports in Italy, Barcelona are prepared to push the boat out to sign Inter Milan striker Lautaro Martínez this summer, placing further question marks over the future of Antoine Griezmann at Camp Nou just a year after the France international signed from Atlético Madrid in a contentious €125m deal.

Tuttosport states that Barça are willing to offer Argentina international Lautaro, who has been given the thumbs up from his Albiceleste teammate Leo Messi, a seven-year deal with an annual wage of €7m - €3m more than the renewal offer he has on the table at San Siro - to lure the 22-year-old from Milan to Catalonia. The contract will consist of a five-year fixed arrangement with the option of two additional seasons until 2027.

Inter have resigned themselves to the loss of the in-demand striker this summer, with his agent Alberto Yaqué admitting that he is in contact with other clubs. Barcelona have been keeping a close eye on Lautaro, who almost joined Atlético Madrid before settling on Inter, and appear to have moved to the front of the queue not least because of the personal interest of Messi in the arrival of his Argentina colleague.

Inter to hold out for over €100m for Lautaro

However, Inter won't just hand Lautaro away and his minimum release clause of €111m can only be activated until the middle of July. Inter won't budge on that valuation but Barça fancy they can sweeten the deal by offering a few players as makeweights, with Ivan Rakitic, Arturo Vidal, Ousmane Dembélé, Philippe Coutinho and Nelson Semedo all potential candidates.

Luis Suárez remains a fundamental piece of Barça's short-term planning and Lautaro will be expected to act as an understudy to the Uruguayan for a season at least, but Griezmann's position at Camp Nou seems increasingly open to interpretation and Barça could seek to offload the Frenchman to raise funds for Lautaro.