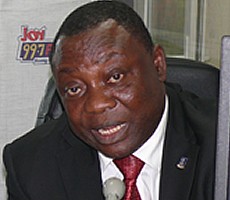 According to the lawyer, per Ghanaâ€™s labour laws, Appiah deserves similar pay as the immediate past coach of the team, Goran Stevanovic.

The Serbian who was fired following the Black Starsâ€™ inability to win the 2012 Nations Cup after just a year into his two year deal was on a 30,000 Euros per month wage.

Appiah, 51, who was appointed as Stevanovicâ€™s replacement on Monday is reported to be placed on a $20,000 per month salary once he signs on after concluding negotiations.

This Yaley however says is unlawful thus his intention of taking the Ghana FA on in the court of competent jurisdiction.

â€œSections of the labour act say everybody shall receive equal pay for equal workdone,â€ he said.

â€œSo I donâ€™t see the reason why Akwasi Appiah should be paid less than the foreign coach, hence my intention to go to court with this case.â€

Appiah has been assistant coach of the Black Stars since 2008 where he was reported to be on a $3000 a month salary.

He will be unveiled as the new head coach on Tuesday at an organized press conference in Accra.