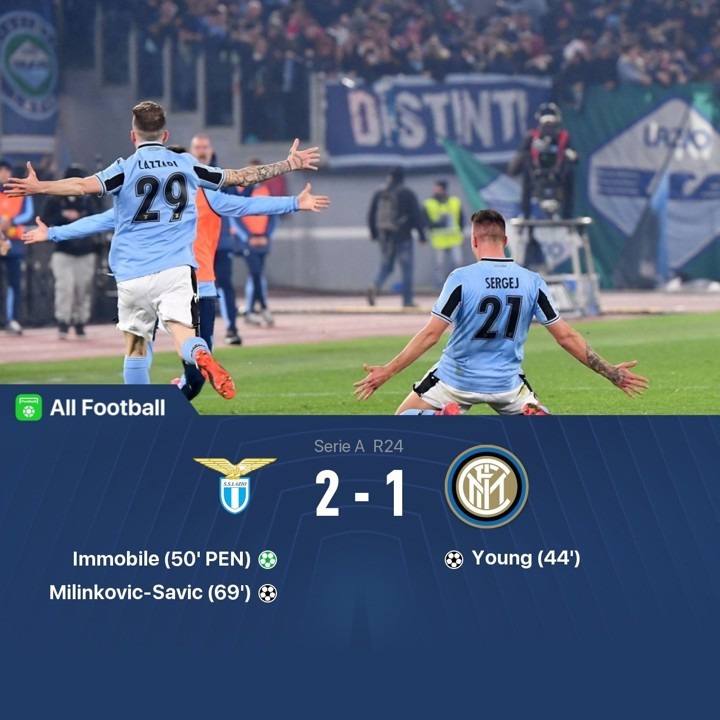 Sergej Milinkovic-Savic completed a second-half turnaround as Lazio secured what could be a crucial win in the Serie A title race by beating Inter 2-1 at the Stadio Olimpico.

Lazio fell behind to Ashley Young's first goal since joining Inter in January but rallied after the restart to hand Antonio Conte's side, who went into this weekend top of the table, their first top-flight defeat in 17 matches.

Inter centre-back Stefan de Vrij, whistled incessantly by fans of his former club, was deemed to have fouled Ciro Immobile in the box and the prolific striker made no mistake from the spot five minutes into the second period.

Sergej Milinkovic-Savic gave Lazio the lead with 21 minutes remaining and the hosts held on to move up to second, two points ahead of Inter and one behind leaders Juventus.

4' Godin's header over the bar

Godin climbs well to meet the resulting corner, but is unable to keep his header down.

OFF THE BAR! What an effort that was! Space opens for Milinkovic-Savic to let fly with a rasping 25-yard effort that crashes against the upright with Padelli stranded.

GOOD SAVE! Inter launch a quickfire counter with Brozovic leading the charge. The skipper eventually lays the ball off for Lukaku to strike, but Strakosha gets down well to push it away.

24' Immobile's long shot over the bar

Lazio turn up the pressure with Lucas and Immobile shooting narrowly over with attempts from just outside the box.

GOAL!!! YOUNG PUTS INTER IN FRONT! The former Manchester United skipper volleys the visitors in front with his first goal for the club. Strakosha can only parry Candreva's fierce initial effort straight into the path of Young, who volleys home on the rebound.

PENALTY TO LAZIO! The referee points to the spot following a huge mix-up in the Inter defence that resulted in De Vrij pushing Immobile to the ground.

1-1!!! IMMOBILE EQUALISES! No problem for the skipper, who calmly sends Padelli the wrong way to level proceedings.

LAZIO LEAD!!! 2-1! The hosts complete the turnaround! De Vrij did brilliantly to clear Immobile's initial volley off the line. However, the ball breaks kindly for Milinkovic-Savic, who bends the rebound into the corner and beyond the reach of Padelli.

OFFSIDE! NO GOAL! Inter thought they had equalised as Martinez headed in Young's square ball. However, the linesman's flag was rightly raised on the far side.

CHANCE! What a save from Padelli! Immobile brilliantly gets away from Godin and bear down on goal, but the Inter goalkeeper reacts well to tip his shot away.