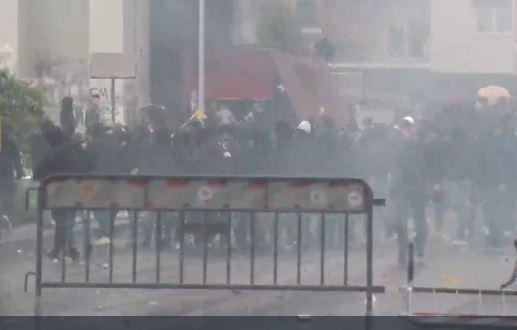 The lead up to tonight’s Coppa Italia final has been marked by clashes between Lazio Ultras and police.

Kick-off between Atalanta and the Biancocelesti is scheduled for 20:45 local time, though the focus has certainly been turned to matters outside the stadium.

While Atalanta supporters have already made their way to the Stadio Olimpico, Lazio Ultras have engaged in clashes with local police.

A group of close to 200 have been caught on video throwing bottles and fireworks at authorities, who responded with water cannons and tear gas.

Clashes have resulted in one injured police officer, while a police vehicle was set on fire.

A preliminary blockade set-up by authorities also resulted in the arrest of two Lazio Ultras, one of whom was already previously banned from the stadium.

The two were stopped in a vehicle carrying 78 flares, 45 rambo k33 firecrackers, 16 fireworks, a firework capable of shooting off 100 times, a pair of scissors, a concealable portable blade and a 45cm piece of lumber.