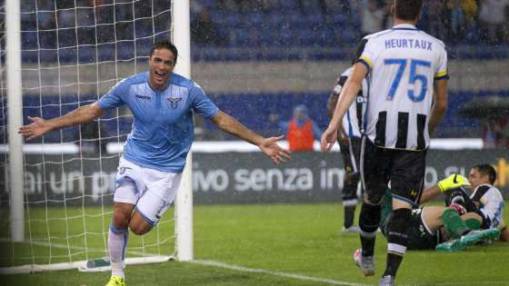 Alessandro Matri, who’s currently on loan at Lazio from AC Milan, could play for the Rossoneri again next season.

The 31-year-old Italian, who has made a total of 31 appearances for the Biancocelesti this season, has scored six times in all competitions.

As per Corriere dello Sport, Matri could play for Milan once again in the 2016-17 campaign, provided Cristian Brocchi is given the chance to coach the side on a permanent basis.

The on loan forward, who was sent to Lazio during the end of the summer transfer window, still has a year left on his deal at the Stadio Giuseppe Meazza.

Matri is said to be very good friends with new Milan boss Brocchi and both have a lot of mutual respect for each other.

Matri joined Milan back in 2013 for a fee in the region of €11 million from Serie A rivals Juventus,  having already plied his trade with the Rossoneri during the early years of his career.