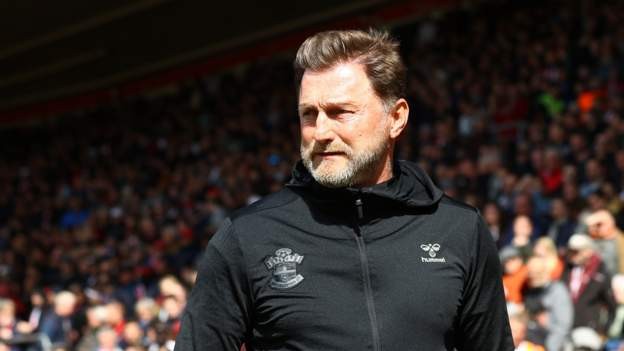 Southampton are 15th in the Premier League table

The Saints welcome league title chasers Liverpool on Tuesday - a must-win match for the Reds if they are to maintain the pressure on Manchester City.

Liverpool are four points behind City with a game in hand.

"This is still the title that's the most countable for everybody because it's the hardest to get," he said.

"For me it's even harder to be over 38 games in the Premier League consistently on the top, than to win the Champions League sometimes."

Mind games: Guardiola, Klopp & the psychology of a title race

Liverpool won the FA Cup on Saturday and remain in contention to win the quadruple having won the Carabao Cup in February.

City have reached only one Champions League final in that time, losing to Chelsea last season, but have won three of the past four Premier League titles, with Liverpool winning the other.

"Even if he [Liverpool manager Jurgen Klopp] says it's tough for him to go for all four, I know he will do everything to win this game on Tuesday to give himself a chance on the last day," Austrian Hasenhuttl added.

"I think it is fantastic for the Premier League to have such a close title race.

"Everybody is electrified from this battle and we are now part of this duel.

"We have done our job this season against Man City with two points; they lost four points against us in the title race.

"Against Liverpool, the first game we lost, so now it's up to us to show again that we can be competitive against a top team."