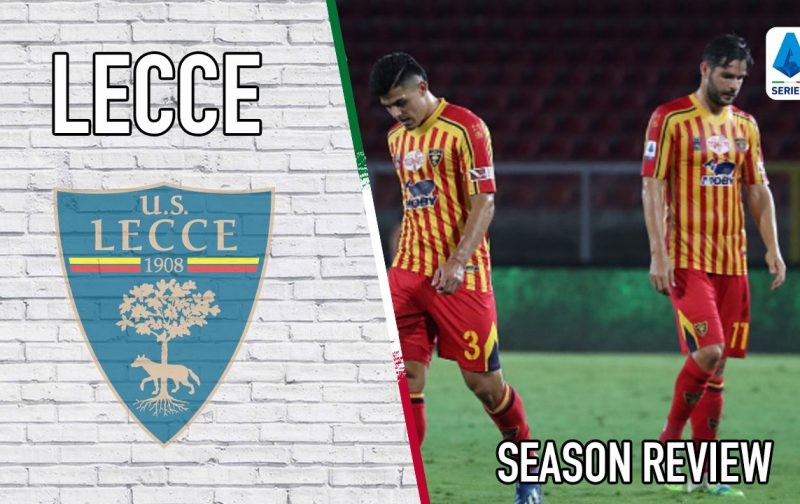 Following Lecce’s spectacular promotion back to Serie A after a seven-year absence when finishing second in Serie B during the 2018/19 campaign, the Salentini find themselves returning once more to Serie B.

The side from Apulia went into the final round of the season with a glimmer of hope that they could have remained in Serie A after being within a point of safety pre-match, trailing Genoa in 17th.

Lecce eventually lost their final game of the season but Genoa took matters into their own hands and the Salentini ended up finishing four points from safety. Fabio Liverani’s men fought valiantly but conceded a whopping 85 goals throughout the campaign which ultimately was the worst record of the sides in Serie A this season.

Player of the Season: Marco Mancosu The 31-year-old captain lead by example for Lecce as his goals, especially towards the end of the season, gave his side a glimmer of hope. The Italian striker racked up 14 goals and had two assists in 33 appearances. Nine of Mancosu’s goals came from the penalty spot, where he had a conversion rate of 82%. Lecce knew coming into Serie A that they needed to add some pedigree up front and Lapdula had struggled to hold down a place following his arrival in Genoa in 2018. He found himself on loan to Lecce where he would add some Serie A experience to a side many expected to struggle. Lapadula would chip in with 11 goals in 25 appearances. Liverani stuck to his preferred formation of 4-3-1-2 and like their campaign where they won promotion to Serie A, his side struggled with leaking goals. Some managers would have adapted and changed but his commitment to playing a certain style of football is admirable.

The 44-year-old technician done remarkably well to get his side promoted and they made have surprised many as it took until the last day to be relegated.

Lecce got three wins in a row following a resounding 4-0 thumping of Torino, a 3-2 win away to Napoli and eventually 2-1 at home to SPAL. However, following the restart to the campaign, the best result for the Salentini was when they defeated Lazio 2-1 and which hampered Lazio’s search for the Scudetto.

The victory was made sweeter by the fact that they went 1-0 down within the first five minutes when Felipe Caicedo put Lazio ahead but Lecce came back fighting and were rewarded when Khouma Babacar equalised on the half hour mark. It could have got better when they were rewarded a penalty but Mancosu fired over for his first penalty miss of the season.

Following the start of the second half, Lecce scored from a corner when Fabio Lucioni fired his side ahead and they had the determination to hold on despite how hard Lazio were pushing with goalkeeper, Gabriel, having pulled off eight saves in the match. For some, relegation was almost a certainty, and they crashed out of the Coppa Italia following a 5-1 defeat away to SPAL in the fourth round but in the league, they went seven consecutive matches without a win.

During this run, they only managed to pick up two points in draws against Genoa and Inter. The matches were against teams around them and they perhaps could have done a lot better. The run lasted from December 8 until January 26, which is potentially where their downfall was a looming reality.