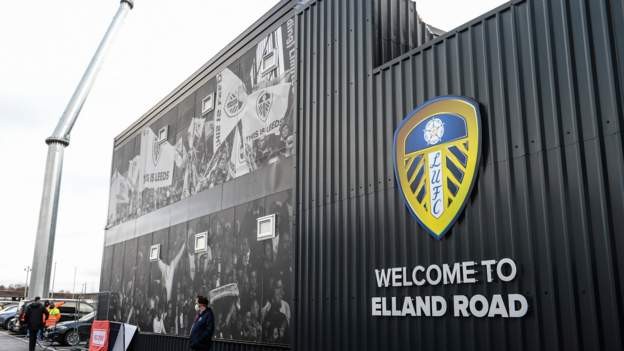 Leeds United and West Yorkshire Police are to review an incident during which Newcastle United fans say they were involved in a "frightening" crush at Elland Road on Saturday.

Fans were left "terrified" before the Magpies' 1-0 win when four turnstiles - designed to let in almost 2,700 supporters - stopped working.

There were no reported injuries.

But angry witnesses said stewards and police failed to respond to an incident which lasted more than 30 minutes.

One fan, Steve Wallwork, told BBC Sport "somebody could have been badly hurt" and described some stewards as an "absolute disgrace" for laughing at the situation.

Fans were eventually let in when a gate was opened, but many only arrived into the stadium concourse 20 minutes after kick-off and could not get to their correct seats because it was so congested.

The club "will now work with the Newcastle United Supporters' Trust, West Yorkshire Police and our own safety team to review the issues raised, and ensure we continue to provide a safe environment for everyone attending our stadium".

Newcastle United Supporters' Trust board member Thomas Concannon was at the game and has spoken to more than a dozen witnesses.

He said the situation was a "complete and utter nightmare".

"Where was the response to the faulty turnstiles?" added Concannon. "This should have escalated to the match controller as soon as they realised there was a problem.

"Fans need to know what happened and why - and they deserve an apology. Many fans were left distressed by such a frightening episode."

Wallwork said the delays caused by the broken turnstiles meant the situation got worse when fans realised they would not make it into the stadium for kick-off.

He added: "I'm not a small lad so it wasn't so bad for me, but my wife was with me. She's a fair bit shorter and she was terrified, absolutely terrified.

"It doesn't matter how much you tell people that people are getting squashed, they just keep pushing forward, and when the game kicked off, they just pushed and pushed.

"You had people from the width of four turnstiles trying to get across to one side where tickets were being scanned manually by one steward.

"The reaction of the stewards was unbelievable. My wife asked one: 'What are you doing about it? We're getting crushed'. He just put his head back laughing - absolutely disgraceful.

"I understand how frightening it was for some people. I was more frustrated and angry about it because somebody could have been badly hurt."

Wallwork's wife, Allison Hutchinson, said: "I was extremely frightened as I thought at one point I was going to fall and get trampled on.

"When I finally got in I just burst into tears. I'm not sure if it was through relief or fear."

West Yorkshire Police said: "We are aware of issues at the Leeds United v Newcastle United game at Elland Road on Saturday that resulted in congestion at the entrance points for away fans.

"We are currently liaising with the club to review the circumstances."

The Football Supporters' Association will also be reviewing the incident.