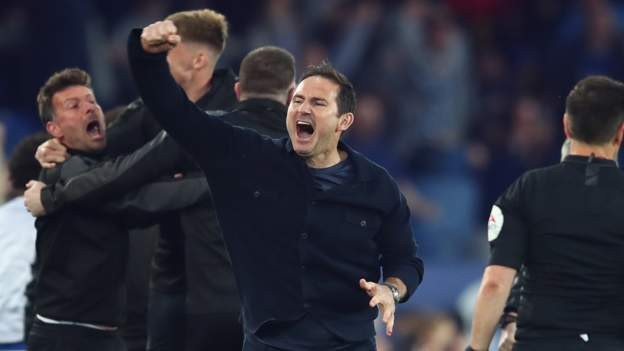 Leeds and Burnley are threatening legal action against Everton and the Premier League over the handling of the club's finances.

Both clubs wrote to the league last week regarding Everton's most recent accounts which showed losses of £120.9m for the 2020-21 season.

They have posted losses of £372m over the past three years.

League profitability and sustainability rules allow for losses of £105m over a three-year period.

But Everton say that Covid-19 losses over the past two seasons amount to £170m.

That figure has caused surprise among some Premier League teams because it dwarfs clubs of a similar size.

Earlier this week, Newcastle posted Covid-19 losses of £40m over the past two seasons, while Aston Villa said theirs amounted to £56m.

Everton, who have been involved in a relegation battle with Leeds and Burnley, secured their Premier League status on Thursday with a 3-2 win over Crystal Palace.

But they are confident they are compliant with Premier League rules and have been "working formally" with the league.

It is understood they are viewing the matter as one of sporting integrity given that the Toffees spent more money in the last transfer window by signing Dele Alli, Vitaliy Mykolenko and Nathan Patterson for nearly £70m.

Burnley, Leeds and the Premier League declined to comment when contacted by BBC Sport.

When releasing their accounts in March, Everton said their actual losses were about £170m over three years because Covid losses can be written off, with the figure calculated as an average over the last two seasons.

They also said other costs including spending on their new Bramley Moore Dock stadium and on the club's academy and the women's team bring their finances into line.

Everton said in March they remain in a "secure financial position" after further support from their owner Farhad Moshiri, who has put more than £600m into the club since he first bought shares in the club in 2016.

But they have suspended sponsorship deals with companies owned or part-owned by Alisher Usmanov, after the Russian billionaire was sanctioned by the UK government and European Union following Russia's invasion of Ukraine.

Usmanov is a close business associate of Moshiri and also paid Everton £30m for naming rights of their as yet unbuilt stadium, which is set to open in 2024.