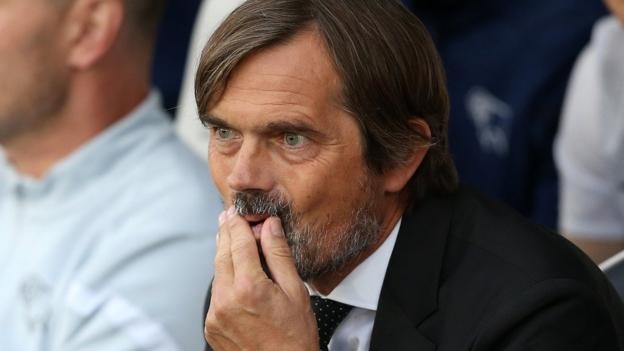 Jamie Shackleton made his first league start for Leeds this season in the win at BarnsleyFollow live text coverage of Saturday's EFL action from 12:00 BST

Leeds United manager Marcelo Bielsa has forward Tyler Roberts and defender Luke Ayling fit for the visit of Derby but both will only make the bench at best.

Midfielder Adam Forshaw (hip) is set to miss out so Jamie Shackleton will start in his place once again.

Derby are without winger Tom Lawrence through suspension but manager Phillip Cocu is otherwise set to name the same side which drew with Cardiff.

Defenders Andre Wisdom and Craig Forsyth are unlikely to feature.

This is the first meeting between Leeds and Derby since the Championship play-off semi-final second leg in May when Derby came from 1-0 down to win 4-2 and progress to the final 4-3 on aggregate. Derby are looking to win consecutive matches against Leeds in all competitions for the first time since a run of 10 wins between December 2006 and October 2013. Leeds striker Eddie Nketiah is averaging a goal every 62 minutes in all competitions for the Whites this season, scoring four times in 246 minutes of action. Derby are winless in six matches in all competitions (D3 L3), their longest sequence without a win since a run of eight under Gary Rowett between February and March 2018. Excluding play-offs, Leeds' Ezgjan Alioski has been involved in four goals in his last three league games against Derby County (two goals, two assists). Derby have drawn their past three Championship matches when scoring the first goal, including their most recent game at home to Cardiff City.