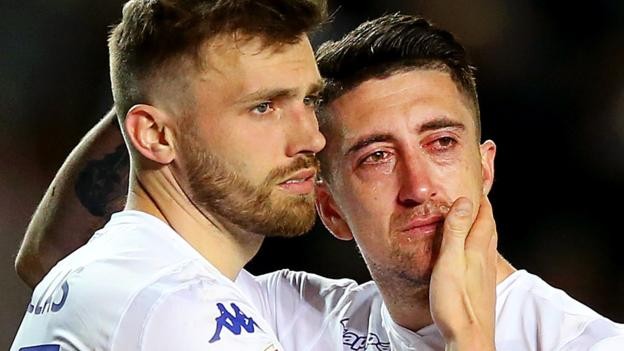 Frank Lampard had the last laugh at Elland Road on Wednesday

Leeds United had to face the music on Wednesday night.

Of course, music has always been a part of football - from the chants on the terraces to the adopted pop songs (You'll Never Walk Alone, anyone?) and the anthems created for the clubs themselves.

But, for the Elland Road faithful, the tune has become all too familiar.

After January's 'Spygate' row between Leeds and Derby - the Whites were fined £200,000 for watching the Rams from a vantage point outside their training ground - the football took centre stage once again on Wednesday.

Leeds took a 1-0 advantage back to Elland Road after the first leg of their Championship semi-final first leg.

After that game, video circulated of a new chant from their fans, set to the Oasis song Stop Crying Your Heart Out:

All of the spies,

Just try not to worry,

You'll beat us some day,

We beat you at home,

We beat you away,

Leeds fans enjoyed their trip to Derby, unaware of what was to come

But, as football fans know, what goes around often comes around, just like vinyl on a turntable.

Sure enough, Derby pulled off what no team had done before - becoming the first team to reach the Championship play-off final after losing the first leg of a semi-final at home.

So Leeds' new song came back to haunt them.

First, Derby County cranked up the volume on Twitter…

Derby County cranked up the volume on their post-match playlist

Then came the dressing-room scenes, complete with Rams boss Frank Lampard rubbing his eyes in full, faux-crying flight (to be fair, there may have been a few tears of joy at some point)...

Then a new version of the song was born:

Rival fans have mocked Leeds fans by singing 'Leeds, Leeds are falling apaaaaaaart… again' to the tune Love Will Tear Us Apart.

And that appears to be borne out by their play-off stats:

Leeds United's play-off record isn't one to be envied

They could be forgiven for wanting to change the record, but Leeds' search for a hit single at Wembley goes on.

Instead, it's Derby who will be in full voice on 27 May when they face Aston Villa for a place in the Premier League.