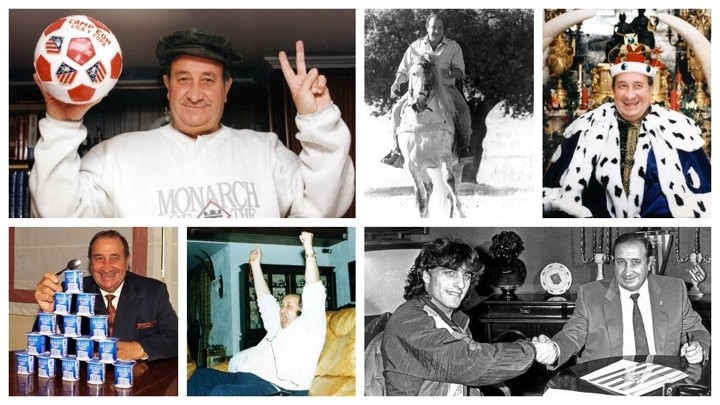 If ever there was a colourful character who changed the role of presidents within Spanish football, then it is Jesus Gil.

The former Atletico Madrid president took charge in 1987 and there have been some legendary tales from his career.

The one with the boat:

Gil became president in 1987 after an unusual electoral program.

Among his campaign promises he suggested that there would be a transformation of the Manzanares River in order to make it available only to Los Colchoneros' fans on matchdays.

There would have been a boat restaurant, although Gil won the election and the river remained unsuitable for transport.

Furthermore, he didn't fulfil another of his promises: to build a running track around the pitch at the Estadio Vicente Calderon.

The one with the nightclub:

One of Gil's great electoral trump cards, one which allowed him to swat away all competition, was the signing of Paulo Futre from Porto.

The player arrived by helicopter and was introduced as a new signing at the Jacara nightclub, one of the popular hotspots in Madrid at the time.

The one with the Parcheesi board:

It was a board game that he shared with his family and closest friends, playing whenever he got the chance.

Rather ironically, he grew to be quite competitive with Real Madrid president Lorenzo Sanz over Parcheesi, with the duo doing battle whenever the two teams played.

If the Madrid derby was due to start at 9pm, then the two presidents would spend many hours earlier in the day at the Parcheesi table.

The one with the clocks:

Ramon Mendoza, one of the Real Madrid presidents during Gil's time with Atletico, was actually one of the main targets of a verbal assault from Gil.

In 1989, Fernando Hierro, a Real Valladolid player, was a transfer target for both Madrid clubs.

There was a financial agreement with Atletico, but Real Madrid signed the player after a compensatory fee.

Gil then bought a batch of watches for club sponsors with the signed card: 'Good enough to trade for a Racer watch. Gift from Mr. Ramon.'

The one with the lizard:

Jesus Gil was a fan of animals.

He made his horse, Imperioso, the most famous horse in Spain, yet he once turned up to a team training session at the Vicente Calderon with a lizard.

He named the lizard Fury, whilst at the same time he also ran a bird sanctuary on his farm, in which he housed birds from all over the world.

The one with the Greeks:

For a visit to Thessaloniki, the Atletico president posed with a pyramid of Danone brand Greek yogurts.

The president then knocked the pyramid down and this was misinterpreted as an insult by those in Greece.

Gil had to explain there were no negative connotations of the image and he apologised the highest leaders in Greece.

The one with the nicknames:

His relationship with Jose Maria Garcia, who supported him during his presidential career, as well as with other journalists, was volcanic.

Despite being close, he was angry whenever there wasn't mutual praise.

The journalist started calling him King Kong Goyito, whilst the president returned the favour and called him the Pony of the Waves.

The one with Eto'o:

On May 8, 2004, a day before he had a heart attack, Jesus Gil saw Real Mallorca beat Real Madrid at the Estadio Santiago Bernabeu, a game in which Samuel Eto'o scored a brace.

The Atletico president commented to those in his close circle that Los Rojiblancos' forward line for the following season would be Eto'o and Fernando Torres.

The one about the Bernabeu boycott:

On the occasion of the Madrid derby was to be held there in the 1994/95 season, the president urged his fans not to travel to the stadium of their rivals.

Instead, he opened the Vicente Calderon and told fans they could watch the match on the video scoreboards.

The one with the floats:

The celebration of the 1995/96 LaLiga and Copa del Rey double triumph for Atletico was one of epic proportions.

Gil's work sparked ecstasy within the city and there was a city-wide party, in which there were 16 floats pulled by almost 50 horses which carried the players through the streets, all organised by the president.