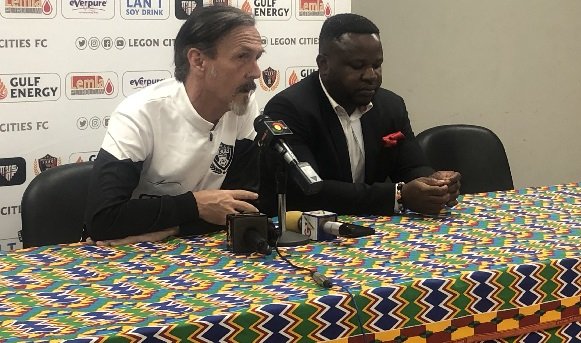 Legon Cities FC coach Goran Barjaktarevic has bemoaned his side’s failure to pick maximum points against Great Olympics, claiming they were denied a clear penalty in the match.

Legon Cities FC aim of returning to winning ways were given a huge boost when striker Pedro Yakubu Mohammed fetched them opener on the 20th minute mark.

But the Royals were dealt a blow following Ibrahim Sulley’s 36th minute equalizer.

In the 88th minute of the game, Legon Cities thought they had found the winner Jabila Abdul Karim went past five Olympics players before being brought down in the penalty box by goalkeeper Ernest Sowah but the referee Rustum Senorgbe waved off their shout as the match ended 1-1.

During his post-match presser, coach Barjaktarevic said his side could have won the encounter had it not been bad officiating.

"I only asked the referee how he saw the penalty decision and he explained to me. No problem. It's part of the game. We will move on. I'm just disappointed we didn't score and win the game."

The result left both Legon Cities and Olympics on 11 points apiece as they occupy 12 and 11 spots respectively.