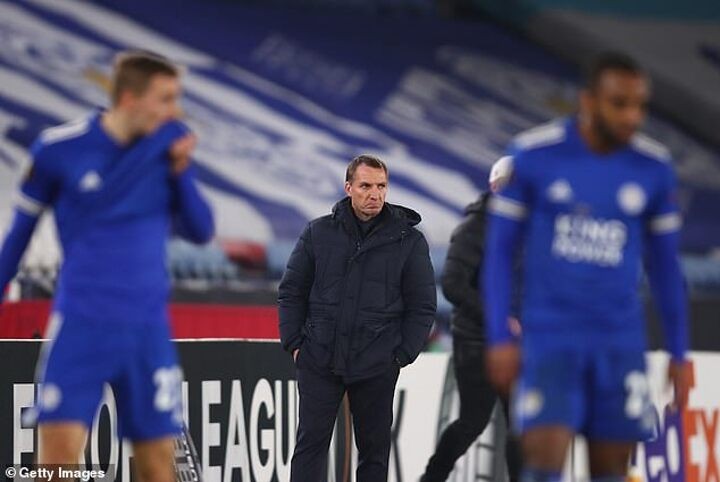 Leicester were dumped out of the Europa League by Slavia Prague after boss Brendan Rodgers’ decision to rest key men backfired.

Harvey Barnes, Ricardo Pereira and Timothy Castagne did not appear until the hour mark, possibly with one eye on Sunday’s midday kick-off against Arsenal here. With James Maddison also out with a possible recurrence of a hip injury, those on show failed to take their chance as second-half goals from Lukas Provod and Abdallah Sima sent Slavia into the last 16, after last week’s first leg ended goalless.

It was a deserved victory for the Czechs against a Leicester side lacking their usual attacking verve – though they should have taken a second-minute lead.

Cengiz Under, making a rare start since his loan move from Roma last summer, sneaked around the back of the Slavia defence and when his shot was parried, Caglar Soyuncu put his volley high and wide.

In the 10th minute, Under found space 25 yards from goal only to shoot straight at Ondrej Kolar, and then Slavia survived a scare when Peter Olayinka nearly turned Jonny Evans volleyed pass into his own net.

Yet Slavia soon grew into the game. Soyuncu – who struggled all evening – misjudged a long punt over the top from Nicolae Stanciu and headed it into the path of Sima, who volleyed just wide. Then six minutes before the break, the impressive Alexander Bah’s cross found Jan Kuchta unmarked inside the box, with Kasper Schmeichel relived to see the header miss the target.

Leicester’s frustration was encapsulated when Vardy wasted a promising crossing position and promptly booted an advertising hoarding in frustration. Moments later, Hamza Choudhury had a penalty appeal turned down when he tumbled under pressure from Jakub Hromada.

The home side made no changes for the second half and should have gone behind when Hromada failed to turn Kuchta’s near-post flick past Schmeichel. Yet the visitors did not have long to wait to make their mark.

Urged on by an increasingly vocal bench, Stanciu swung over a deep cross and Provod, whose charge from midfield had not been tracked, kept his nerve to convert it on the volley.

Leicester rallied after the triple change but Slavia kept them at bay and sealed the tie when, with Soyuncu standing off him, Sima collected Olayinka’s pass 25 yards out and arrowed a low shot beyond Schmeichel.