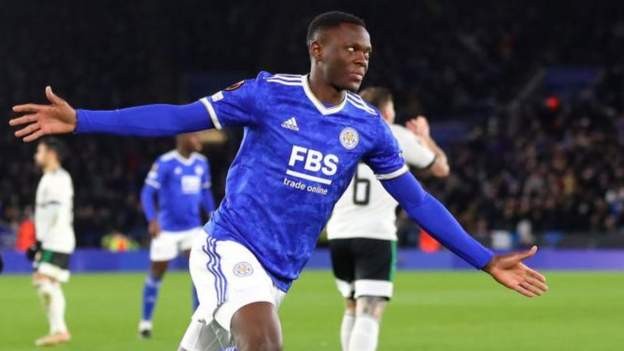 James Maddison scored his second goal of the season for Leicester

Leicester City saw off Legia Warsaw to leap to the top of Group C and put themselves in pole position to reach the Europa League knockout stage with one game remaining.

The Foxes, who began the day bottom of the group, had the job done by the break at King Power Stadium, leading 3-1 after an open and entertaining first half.

Wilfred Ndidi then headed in from a corner to re-establish the home side's advantage before a goalless second half.

Leicester lead the group on eight points, one above Spartak Moscow and Napoli after the Russian side won their meeting 2-1 on Wednesday.

Foxes back up and running

Leicester's progress under Brendan Rodgers has stalled this season with some inconsistent results, though victory means they now lead the group with a trip to Napoli still to come.

The Foxes arrived on a four-game winless run since beating Brighton on penalties in the Carabao Cup, but their flowing attack was enough to cover up any defensive frailties after losing Jonny Evans in the warm-up to a muscle injury.

Daka got the hosts off to a quick start, finishing smartly after an aggressive run from Harvey Barnes saw the ball deflect into the Zambian's path inside the penalty area.

Maddison was then allowed time to turn inside the box and pick his spot to double the hosts' lead 10 minutes later, scoring his second goal of the season.

Group C has been unpredictable throughout and Legia sparked hopes of unlikely turnaround when Mladenovic tapped in after Schmeichel got down to keep out Emreli's spot kick.

Ndidi, whose handball gave away the penalty, made amends soon after by heading in from Maddison's corner and that put the game beyond the visitors.

Barnes went through in what proved a tighter second half under a haze of smoke from the flares released by visiting fans, but could not beat Legia goalkeeper Cezary Miszta.

Those flares set off from the away end were followed by clashes between Legia fans and police.

But on the pitch Leicester dominated without really threatening to add to the advantage as they saw out a comfortable victory.

Marc Albrighton (Leicester City) is shown the yellow card for a bad foul.

Yuri Ribeiro (Legia Warsaw) wins a free kick in the defensive half.

Attempt missed. Kiernan Dewsbury-Hall (Leicester City) left footed shot from outside the box is close, but misses to the right.

Artur Jedrzejczyk (Legia Warsaw) is shown the yellow card for a bad foul.

Harvey Barnes (Leicester City) wins a free kick in the attacking half.