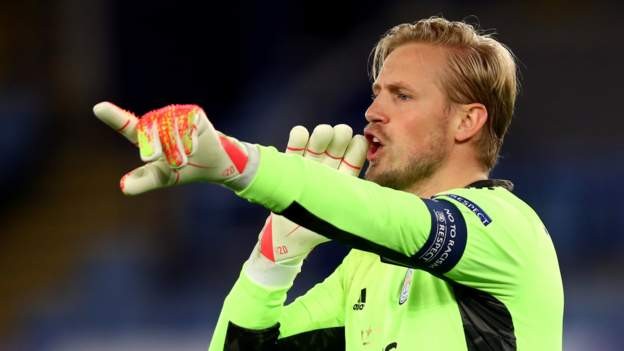 Leicester have won two and lost two so far in the Premier League, including Saturday's 1-0 defeat by Manchester City

Kasper Schmeichel says it is important Leicester are not "complacent and timid" in their search for more success, starting with Thursday's Europa League opener against Napoli.

The Foxes reached the last 16 in 2020-21, along with winning the FA Cup and finishing fifth in the Premier League.

They and Italian side Napoli are two of the highest-rated sides in this season's competition.

"The club is always looking to improve," said Schmeichel.

"That's the most important thing to me, when you are in an organisation which has had success the hunger is still there.

"You cannot become complacent and timid. That's when you take the foot off the gas. We have always got to be looking for what's next. We can't use the past for anything - that past is done.

"There are many steps we can still take We are looking to improve every day and this season is another opportunity.

"We are in a very good place. We have had a lot of recent success but that means you have a choice to make. Are you content with that or do you want to progress and move on?"

Leicester were beaten by Slavia Prague in the Europa League last season, but are tipped to progress from a group that also contains Spartak Moscow and Legia Warsaw.

The eight Europa League group winners progress automatically to the last 16, with the runners-up playing the eight third-placed teams in the Champions League groups.

Schmeichel added: "It's never been our approach to look at others, we look at ourselves more than anything. When I look at our dressing room I have every reason to be supremely confident.

"There are top-class sides in this competition and others coming in from the Champions League. You can't always say because you don't know who is going to be coming into the competition."

Napoli travel to England after a superb start to their domestic season, having won their three opening games in Serie A.

This includes a 2-1 win over Juventus on Saturday, with highly rated centre-back Kalidou Koulibaly scoring an 85th-minute winner.

In attack they have Lorenzo Insigne, who has excelled for Italy in their record-setting run of 37 games unbeaten, during which they won Euro 2020 in the summer.