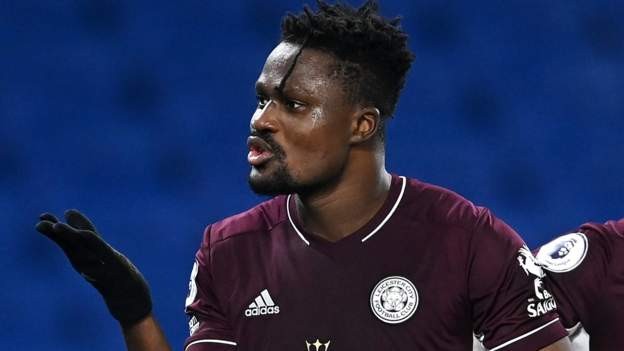 Daniel Amartey's goal was his first this season

Daniel Amartey scored a late winner as Leicester City came from behind to beat Brighton and boost their bid for Champions League qualification.

Kelechi Iheanacho began the fightback with his second goal in as many games.

He cancelled out Adam Lallana's first Brighton goal, which ended a 504-day drought without scoring.

Victory lifted Leicester above Manchester United and into second place in the Premier League, while extending their unbeaten away run to 10 league games.

Brighton remain three points above the relegation zone in 16th.

Foxes stay in the hunt

Leicester were on course for a top-four finish last season before falling away after the postponement for coronavirus.

Talisman Jamie Vardy has scored only once in his past 11 league games, but Iheanacho is producing the goals to fill the void.

Having rescued a point at Burnley on Wednesday, Iheanacho latched on to Youri Tielemans' exquisite no-look through ball to lift the ball over Sanchez for the equaliser.

Amartey was the beneficiary when Albrighton whipped in an excellent late corner and Sanchez was unable to free his arms and punch the ball clear in the melee of bodies.

Leicester have the best away record in the division, and with key playmaker James Maddison likely to return before the end of the season, their credentials are looking strong.

Injuries have cost the 32-year-old a consistent run in the side, but this was his best performance for Brighton.

He latched on to Neal Maupay's through ball to smash past Kasper Schmeichel from inside the area with aplomb.

Lallana was playing with confidence and was denied a second goal by a smart save from Schmeichel with the scores level.

The Seagulls are in danger of being sucked into the bottom three but keeping Lallana fit may be their best route to another season in the top flight.

Ricardo Pereira (Leicester City) wins a free kick in the defensive half.

Attempt missed. Jamie Vardy (Leicester City) right footed shot from outside the box is too high. Assisted by Kelechi Iheanacho.

Attempt saved. Adam Lallana (Brighton and Hove Albion) left footed shot from the centre of the box is saved in the bottom left corner. Assisted by Pascal Groß.

Neal Maupay (Brighton and Hove Albion) wins a free kick in the defensive half.

Attempt missed. Joël Veltman (Brighton and Hove Albion) right footed shot from the centre of the box misses to the right. Assisted by Pascal Groß with a cross following a set piece situation.

Youri Tielemans (Leicester City) is shown the yellow card for a bad foul.

Our lives online: What happens when being a troll becomes the new normal?The iconic Daft Punk: Another chance to hear their legendary Essential Mix