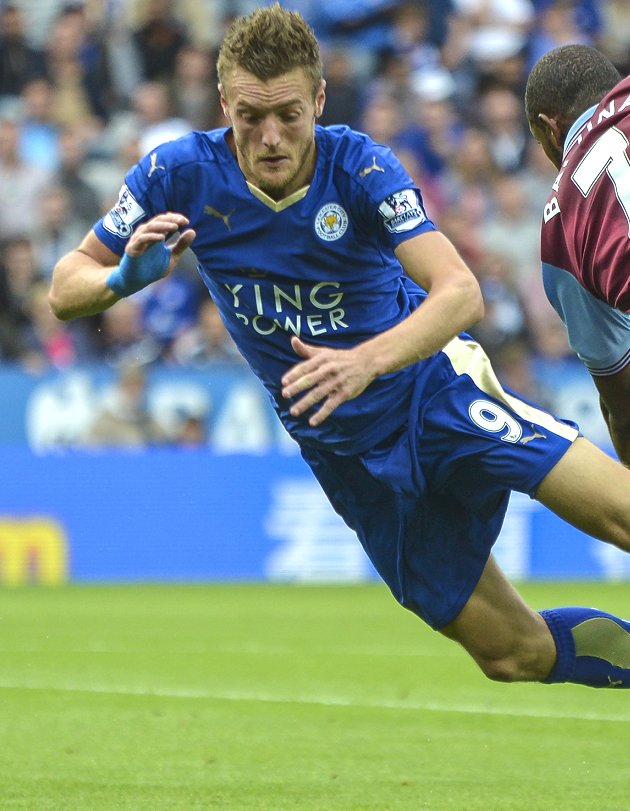 Leicester City fell from first to second on the Premier League table after being held to a 1-1 draw by Manchester United on Saturday.

Claudio Ranieri's Foxes took the lead through Jamie Vardy, who broke Ruud van Nistelrooy's Premier League record by scoring for the 11th straight game, but there were no celebrations in the East Midlands as United hit back on the stroke of half-time.

Vardy notched his 14th goal of the campaign with an emphatic angled finish from Christian Fuchs' lovely through ball in the 24th minute to become the first man in Premier League history to score in as many consecutive matches.

Leicester's lead was short-lived, however, as Bastian Schweinsteiger netted his first goal for United when he powered a point-blank header from Daley Blind's inswinging corner just before the break.

Neither side could break the deadlock in the second half as Leicester picked up a point to fall behind Manchester City on goal difference with United sitting a point in arrears in third.

- Can Vardy break the 12-game first division scoring record set by Sheffield United's Jimmy Dunne in 1931/32? Having scored 14 goals in 14 games, can he break the 31-goal record set by Alan Shearer, Cristiano Ronaldo and Luis Suarez in a 38-game season?

- Man Utd miss chance to go top but remain third after another flat performance. If they can consistently find their best, can they seriously challenge for the title?

Leicester will look to extend their seven match unbeaten run when they head to Swansea City on Saturday while Man Utd will be in search of a win when West Ham United come to Old Trafford on the same day.

An honor & great feeling to have scored for the 1st time for @ManUtd. However, I'd choose three points over my goal. pic.twitter.com/SS0De9SLBk
— Basti Schweinsteiger (@BSchweinsteiger) November 28, 2015

Thanks to everyone for all the congratulation messages! Over the moon to have achieved this, but there is still lots of work to be done!!
— Jamie Vardy (@vardy7) November 29, 2015

"My players are disappointed because we had the feeling we could win. That is difficult to cope with because we could have been first in the league and now we are not.

"I am very disappointed because I had a feeling we could have won this game and we didn't do that and we gave the goal away."

Leicester boss Ranieri continues to only look at survival:

"Now I am thinking there are 11 points to go.

“It's important for our honour and our project to achieve 40 points, and then we put another little step."

STATS SPECIALS
*Thanks to Opta

14 - Jamie Vardy (14) has now scored the most goals by a Leicester player in a single Premier League campaign. Lauded.
— OptaJoe (@OptaJoe) November 28, 2015