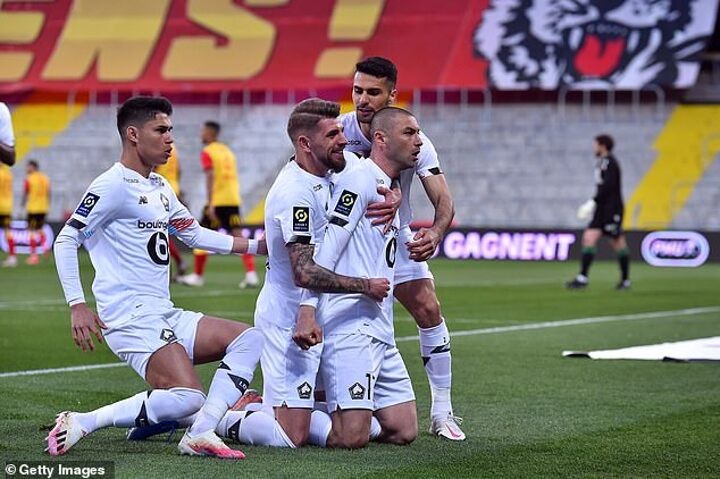 Lille edged closer to their first Ligue 1 title in 10 years as a Burak Yilmaz double inspired them to a 3-0 win in the derby of the North at 10-man RC Lens on Friday.

Yilmaz struck a penalty and a stunner in the first half with Jonathan David adding another after the break to put Lille on 79 points with two games left, four ahead of champions Paris St Germain who play their game in hand at Stade Rennais on Sunday.

Promoted Lens slipped down to sixth on 56 points, behind Olympique de Marseille, who travel to St Etienne on Sunday, on goal difference.

Lille, last crowned champions in 2011, are looking to become the second club other than PSG to clinch the Ligue 1 title since 2013.

Third-placed Monaco, on 71 points, and fourth-placed Olympique Lyonnais, 70, are now likely to battle it out for no more than a top-three finish for a Champions League spot.

Lille were awarded an early penalty following a VAR review after Jonathan Clauss and Seko Fofana appeared to bring down Jonathan Bamba in the area, with Turkey striker Yilmaz converting to put the visitors ahead on four minutes.

Michelin then picked up two yellow cards in quick succession and was sent off in the 35th minute, leaving his side with a mountain to climb against the best defence in the league.

It took Lille only five minutes to capitalise as Yilmaz fired a 25-metre missile into the top corner to double the advantage.

David added a third on the hour as he sent a half-volley into the net after Jean-Louis Leca had parried Bamba's shot into his path.

Lille, now unbeaten in their last 13 away games, next host St Etienne before ending their season at Angers.

After their trip to Rennes, PSG will host Stade de Reims and travel to Brest.