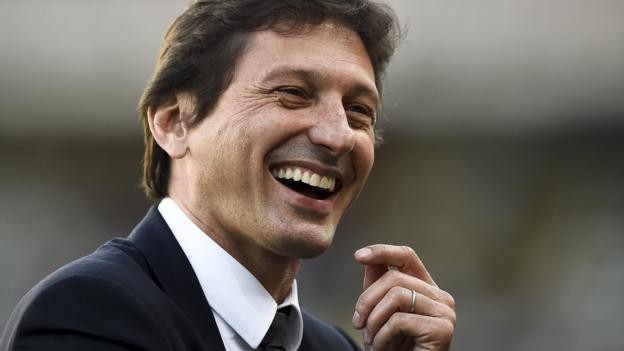 Leonardo scored 10 goals in 46 appearances as a PSG player

Former Paris St-Germain midfielder Leonardo has been appointed the club's sporting director for the second time.

The 49-year-old, who previously held the role from 2011-13, replaces Antero Henrique who departed the club on Friday after two years.

"I am really happy to come back to PSG once again," the Brazilian said.

"This club has been so important to me in my football career and in my life. I had really emotional moments here both as a player in the late 90s and more recently as sporting director along with our chairman Nasser Al-Khelaifi on my return to the club in 2011.

"Today, I come back to Paris full of energy to rejoin this club that I deeply respect."

During his first spell at PSG, Leonardo - a World Cup winner with Brazil in 1994 - oversaw the club's takeover by Qatar Sports Investments and their first Ligue 1 title in 19 years.

"It is always a special moment to see Leonardo return to Paris St-Germain," said Al-Khelaifi.

"Leo has a place in our club's history and we all know the role he played as sporting director at the start of our project.

"Paris St-Germain has always remained his family and we are delighted to welcome him back. His return, with his enthusiasm and talent, will bring the club into a new ambitious cycle and I am sure that this reunion will bring happiness to the Parc des Princes, which has always kept Leo in its heart."