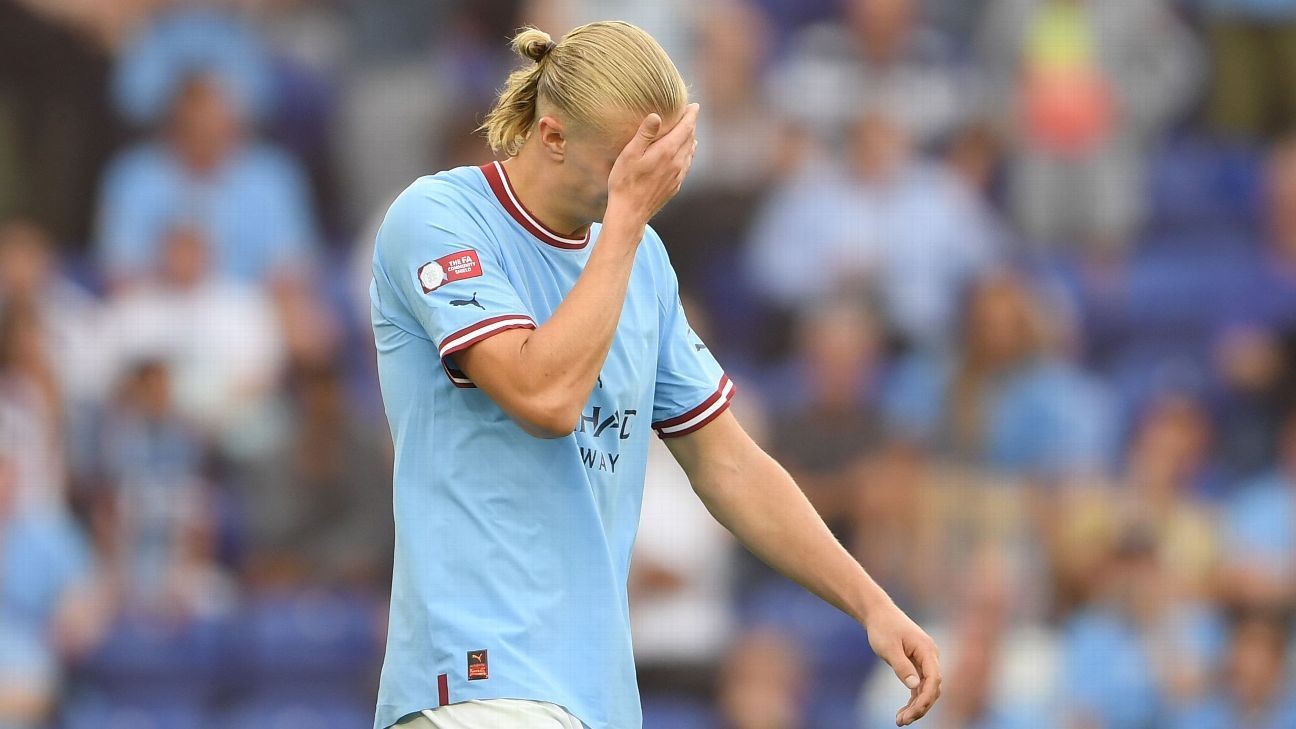 If Erling Haaland has more games like Saturday's 3-1 Community Shield loss to Liverpool, where he missed two clear chances, you can expect the knee-jerk reactions to flood in like unwanted spam after leaving your email on a dubious website:

"This ain't the Bundesliga, this is next level."

"There's too much pressure on the biggest stage in the football world."

So let's get out in front of this before things get a little silly. And, yes, they may well get really silly, really quick.

For starters, it's obviously one game. Ninety-nine minutes in a glorified friendly, not even at Wembley but at the King Power Stadium.

Sample size, anyone? Do you need a reminder that last season's big centre-forward signing, Romelu Lukaku, scored four goals in his first four appearances for Chelsea and then didn't score again until December? And you do know how things turned out for him at Stamford Bridge, yes?

August football is just that. August football (July in this case, but the point stands.) After three league games last season, Nuno Espirito Santo was perfect and top of the league, while Mikel Arteta was last with zero points and goal difference of minus nine. Guess who ended up a whisker away from the Champions League places and with a big fat transfer budget this summer and who was fired on Halloween and is now summering in Saudi Arabia?

You may also want to consider that he was playing against the stingiest defence in the Premier League last season, led by a guy named Virgil van Dijk, and he won't be facing them every week. And, yes, grizzled cliche merchants will tell you that he was acquired to win big games against top opponents. But that's the sort of throwaway comment most of us outgrew when we realized you get the same number of points for beating Fulham as you do for beating Liverpool.

As for his performance, he only got on the end of three chances, but they were GOOD chances. As in high quality chances, as evidenced by his cumulative xG of 1.09, which was more than Liverpool's entire team managed in the first 83 minutes, until Mohamed Salah's penalty.

Erling Haaland may have made a mess of his Manchester City debut, but there's no need to think that he will struggle this season. Harriet Lander/Copa/Getty Images

For the first, Haaland road-graded Andy Robertson. To his credit, Robertson did what he could to put him off, but the man-child is simply bigger and stronger and STILL got his shot away.

For the second, he probably should have gone with his right foot or his head. Thank you Captain Hindsight. But he probably still expected to score.

And for the third, he found himself wide open a few steps from a prone Adrian and somehow managed to rocket the ball off the crossbar.

You generally worry when people don't get on the end of the chances. That wasn't his problem on Saturday. In fact, while the fine print disclaimer always applies ("past performance non necessarily indicative of future results") this is a guy who has consistently far outperformed expected goals, season after season. The 105 goals he has tallied since 2019 have come on an xG of just 81.56. Very simply put -- for those who haven't yet wrapped their head around what xG (expected goals) are -- had the average footballer taken exactly the same types of shots in exactly the same situations as Haaland over the past three years, you would have expected them to score 81 and a half goals, which is 23 and a half fewer than Haaland. Players occasionally outperform xG for a season or two: very few do it three years in a row unless they're pretty exceptional. Which he is.

But maybe the most telling moments came on those occasions when he didn't come near the ball. A couple of times his arcing run into deep wasn't immediately found by Kevin De Bruyne, or his burst into the six-yard box was missed by a wide teammate who opted for a cutback, the bread-and-butter move of the Guardiola era.

Blame Haaland for making the wrong run or making it at the wrong time? Blame his teammates for going on autopilot rather than picking up on his movement? Neither. Just accept the fact that chemistry is built over time and that it's hard to disengage the autopilot that brought City so much success. He reaffirmed what we already know: that his movement and ability to find space is exceptional. All that's required is for his teammates to tweak Guardiola's AI game plan to account for the fact that there's a big, fast, strong centre-forward leading the line, not a recycled No. 10 type who drops off and wanders wide.

That's the other reason to have faith: Guardiola. He knew what he was signing, he knows the weapon that Haaland can be. And it's not just the goals and the movement, it's the areas in which he can still improve, like heading, and those that are untapped, like passing and creating. Yes, the last time Pep had a giant Nordic striker dropped into his team it spoiled the chemistry and it didn't work out. That was at Barcelona in 2009-10 and they had to make do with winning LaLiga and coming within a goal of the Champions League final (poor dears). But Haaland isn't Zlatan Ibrahimovic and Pep 13 years ago isn't Pep today. He has learned a thing or two since, as evidence by the fact that when he had a dominant centre-forward like Robert Lewandowski at Bayern Munich, he won titles and broke records.

But maybe the biggest reason to believe is that Haaland only turned 22 last month and he has a contract through 2027. He's only had a full season under one manager once in his career (and that was Marco Rose). Barring an improbable Guardiola walkout, he'll get multiple seasons of Pep and that can only help him grow. If he's only average this season, that's fine too, because of the sort of club Manchester City are right now. They'll still be more than competitive. Heck, look at their most expensive player ever, Jack Grealish, who arrived a summer ago: he didn't exactly pull up trees, but nobody was burning him in effigy or beating a path to his front door with pitchforks and torches.

It's not to say that City fans aren't passionate or demanding, it's just to say that after four Premier League titles in five seasons, they have enough capital in the bank that they can be patient and need neither a saviour nor a scapegoat.

You want pressure? Try being the 21-year-old with the mega-release clause expected to carry an underachieving, injury-riddled Borussia Dortmund in front of 80,000 fans and the yellow wall every other weekend. Haaland's been there and done that.

If anything, Saturday confirmed what we already know about him. He's strong, he's fast, he's fearless and he has near supernatural sense of where to be and when. That's plenty for Pep to work with.