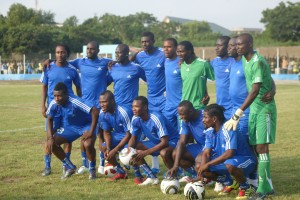 A lone strike from Michael Helegbe was enough to seal victory for Liberty Professionals against a select Emmanuel Adebayor side in a charity game played at the Karl Reindorf Park on Tuesday.

The game was organized to cap the Togolese stay in Ghana as he flies out to his base ahead of the tough European season.

The Dansoman municipality came alive with the gathering of football stars which included ex Ghana captain Stephen Appiah, Asamoah Gyan, John Paintsil, Laryea Kingston, Baffour Gyan, Ahmed Barusso, some members of the Togo national team and some of Ghana's top musicians who all featured for the Adebayor XI side.

The event which was free to the public saw the influx of all kind of people at the stadium who wanted to catch a glimpse and interact with their icons.

The match itself which was played in a very competitive spirit was very entertaining and got the crowd constantly up on their feet to applaud magnificent skills displayed.

Adebayor, 26, had used his holidays in Ghana to bring relief to the people of Koro and Hamile in the Upper West Region by providing them with clean portable water.