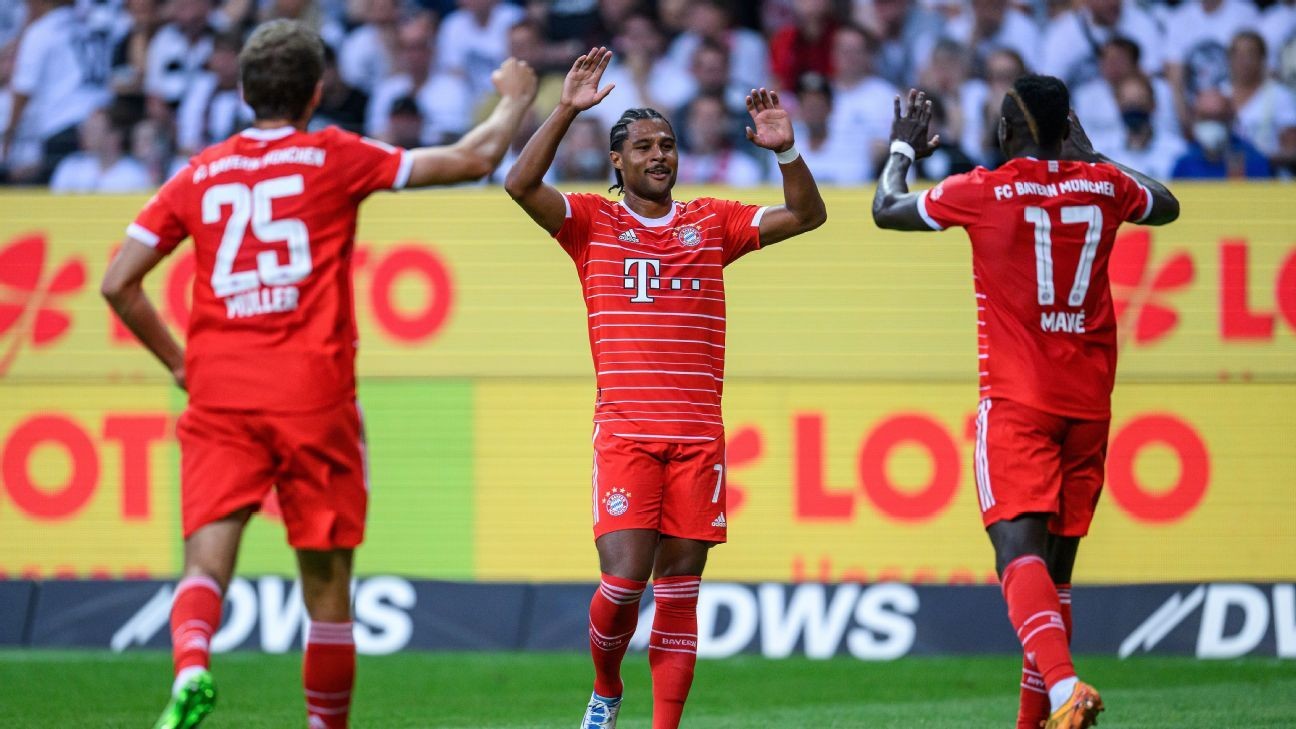 The trio of Muller, Gnabry and Mane will need to step up, but should have little trouble doing so, in order to make up for the goals Lewandowski scored during his time at Bayern Munich. Markus Gilliar - GES Sportfoto/Getty Images

Robert Lewandowski, the No. 9 who broke so many Bayern Munich and Bundesliga goal-scoring records throughout his eight-year career at the Allianz Arena, left for Barcelona last month. His departure marks the end of an era for the club.

With the Bavarians without their top scorer of the past eight seasons, a big question has been raised: How is manager Julian Nagelsmann going to organise his team in 2022-23 without their superstar striker? Now that we've had the German Super Cup (a 5-3 win over RB Leipzig) and witnessed Bayern's 6-1 win against Eintracht Frankfurt, we can analyse what might be to come.

Lewandowski's role throughout the years

It's important to recognise that the way Lewandowski was used under Nagelsmann was different compared to the years prior.

Since Bayern brought Lewandowski in from rivals Borussia Dortmund in 2014, managers from Pep Guardiola to Hansi Flick have preferred to play a one-striker-system with him as the focal point of their attack. In the majority of these games throughout eight seasons, Lewandowski's main positioning was based in central areas on the pitch, not only the centre of the final third.

One of his tasks was to occupy the space of both centre-backs, forcing those defenders to cover him (also known as pinning back), making it more difficult to defend in line with the rest of the defence. From there, Lewandowski could drop in between the lines to take part in Bayern's link-up play or attack the space behind the defenders. This task was ideal for him because he started in central areas, which made it a nightmare for those defenders as he could use every route and angle possible. He had more options to attack than his opposition could cover.

Once the focal point of the Bayern attack, Robert Lewandowski had the capability to terrorize defenders by exploiting any potential spaces. Jasmine Baba

Considering there are no limitations on where Lewandowski could go from the centre of the pitch, he could attack spaces in front of one defender or behind, in to the space beyond their field of vision. This, paired with the striker's world-class technical ability, defiant dribbling and balance of skills every forward needs, explains why he's been able to break several of Bayern legend Gerd Muller's records.

Ultimately, by being the star man, Lewandowski was also helped by the politics of Bayern Munich. Star players are generally kept happy with no real challenges for their place. This allowed him to be front and centre, with his backup, Eric Maxim Choupo-Moting, happy enough to tag along.

Arne Friedrich explains why Bayern Munich is hopeful that Sadio Mane can replace some of Robert Lewandowski's production.

When Nagelsmann was appointed Bayern head coach last summer, it didn't change Lewandowski's role or area of movement in possession, but the manager increased the number of attackers in the penalty area, meaning the Poland international still wasn't limited by his place on the pitch, but was instead disrupted by his own players. We know this because his expected goals per shot was the exact same as in the 2020-21 season under Flick, but Lewandowski scored fewer goals. We have plenty of examples of Bayern overcrowding the opposing penalty area, most recently in their loss to Villarreal in the quarterfinals of last season's Champions League.

It was Nagelsmann's idea that having more players arriving in the box would generate more attacking threat, and therefore goal-scoring opportunities, as there would be a numerical advantage for Bayern players to pick up second balls or defections. It didn't matter who arrived as long as one of them did.

Yet there was also change to his role out of possession. Before Nagelsmann, Lewandowski would lead the press starting from a central position, forcing the opponents wide and blocking their passing routes into the centre of pitch. With Nagelsmann as head coach, that changed as he used more players up front to press their opponents. So, instead of Lewandowski starting from the centre, he was pushed more towards the side. If Bayern won the ball, he was in a worse position to lead a counterattack.

Mane marks the beginning of a new era

With the signing of Sadio Mane from Liverpool earlier in the summer, I predicted he was likely to be played up front rather than on the wing, unless Serge Gnabry was thinking of departing but he eventually signed a new contract. Now that we've seen the German Super Cup and their opener at Frankfurt, we know this is true, however it's not an out-and-out replacement as I originally thought -- and it's also changed Gnabry's role along with it.

Against RB Leipzig and Frankfurt, Nagelsmann played both up front in a 4-box-2 formation, with Jamal Musiala and Thomas Muller as half-wingers (not as wide as a typical winger, yet not as central as a No. 10) behind them. This gives Bayern an incredible amount of flexibility with Musiala and Muller cutting inside, occupying central areas in between their opponents' lines, which frees up Mane and Gnabry to drop onto the wings or attack the space behind their rivals' last defensive line.

Here's him talking about his position, the communication involved with Bayern's rotating attack and how he honed his dribbling. pic.twitter.com/e51KbDvBrC

This setup allows the attackers to frequently rotate positions, disrupting the opposing team's ability to stay organised while tracking Bayern. This has worked perfectly thanks to the individual profiles of each player: Mane's combination of speed and finishing allows him to attack the spaces in behind the defence constantly; Gnabry's technical ability and pace helps him to balance Mane's runs in behind while dropping in between the lines.

Meanwhile, Musiala's finesse in dribbling in tight spaces and Muller's ability to find space provides the perfect balance for the strikers to leave their positions, as Muller and Musiala are able to cut inside (detailed above). As soon as one player occupies a new area, a different player picks up his old position and so on, which is why it is so difficult to defend against.

With Leroy Sane and Kingsley Coman, both more traditional wingers who like to remain wider than in the half-spaces, Nagelsmann is also able to add more speed, directness and -- if needed -- width to their game.

With Bayern's attackers rotating positions across the pitch, opponents have struggled to remain organised while accounting for the constant movement of the likes of Sadio Mane, Serge Gnabry, Jamal Musiala and Thomas Muller. Jasmine Baba

Nagelsmann still relies on the same build-up mechanics as last season. This includes Benjamin Pavard staying deeper, helping his team's centre-backs in their build-up play, and Alphonso Davies pushing higher up. The double pivot consists of one pivot player (usually Joshua Kimmich) staying just ahead of the centre-backs and one higher to aid in this phase of play (usually Leon Goretzka, but so far it has been Marcel Sabitzer).

With Bayern combining their strengths (ball progression and fluidity within their front four), they've made a big step to redefine their attack. Instead of relying on a single player, they are now capable of distributing the attacking threat across their front four, leading to them scoring 10 goals against RB Leipzig and Eintracht Frankfurt.

It's been a great start to life without Lewandowski, and we are still yet to see how players such as Sane, Coman, Ryan Gravenberch or the young Mathys Tel will supplement Bayern's new-look attack over the course of the season.