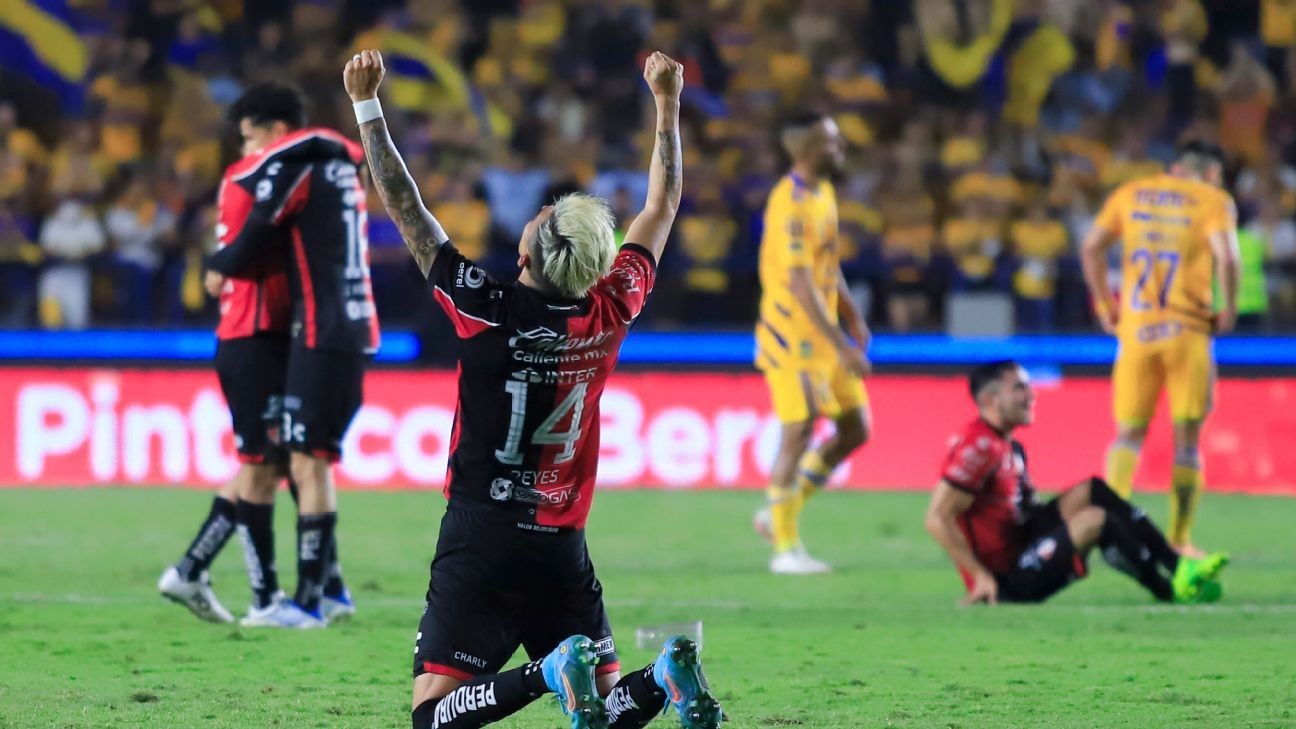 The Liga MX finalists are now officially set! Following a captivating and controversial semifinal round, the race towards the 2022 Clausura title has narrowed down to Atlas and Pachuca. In case you missed any of the latest action, here's a recap of the semifinals and some quick thoughts ahead of the upcoming two legs of the championship series.

During an enthralling weekend in world soccer that had no shortage of drama and storylines, both No. 3 seed Atlas and No. 2 seed Tigres found a way to briefly steal the spotlight in their breathtaking semifinal battle that ended 5-4 in Atlas' favor.

Up 1-0 at halftime of Saturday's second leg, and leading 4-0 on aggregate after a dominant 3-0 result in the first leg, it initially seemed as though current title-holders Atlas had all but secured their place in the final. Tigres, in order to sneak through as the higher seed, would need to score at least four goals in the second half.

Which is exactly what they did.

In front of a raucous 41,000+ at Tigres' Estadio Universitario, the home side mounted a second half comeback that featured a hat-trick within 30 minutes for star striker Andre-Pierre Gignac. By the 81st minute, Tigres then miraculously leveled the aggregate scoreline at 4-4 after Igor Lichnovsky headed in a pass from close range.

Confidence at an all-season high and with enough goals for a spot in the final, Tigres' Yeferson Soteldo appeared to prematurely celebrate after standing on the ball with both feet near the end of regulation time, taunting an Atlas squad that would eventually be given a late lifeline. Following a foul from Jesus Angulo, an injury time penalty was handed to Atlas.

Andre-Pierre Gignac and Tigres fell short of what would have been a historic rally. Alfredo Lopez/Jam Media/Getty Images

Tigres' Florian Thauvin began to kick and tear up the grass near the spot. Goalkeeper Nahuel Guzman, either overcome with emotion or utilizing bizarre mind games, delayed the penalty after crying for an extended period of time. Cool and collected, Atlas' Aldo Rocha stepped up and scored in the 100th minute, thereby giving them a 5-4 aggregate advantage that was later cemented by the final whistle.

Even if Atlas didn't score off the penalty, and even if Guzman didn't ruin Tigres' chances for a possible last-second opportunity after being given a red for using an additional ball in play, Tigres would have run into serious complications to the final after breaking a league rule. When Thauvin stepped onto the field after halftime, Tigres had nine foreign players in their XI, surpassing the maximum of eight allowed on the pitch at the same time.

Over the weekend, the league announced that it will investigate the incident.

As for Atlas, a place in the final is deserved, but we also can't overlook how much they fell apart in the second half on Saturday. Typically solid in defense, members of Atlas' backline looked stunned as they failed to win duels and gave their opposition plenty of chances to shoot in the 18-yard box.

Manager Diego Cocca had his players sit back a little too much late into the game, especially after bringing off striker Julio Furch in the 65th minute, but nonetheless, he and his squad survived the demands of the semifinals and are now on the cusp of potentially winning back-to-back titles.

"We're two games away," said Cocca after Atlas qualified for the final. "It's going to be very tough, it's going to be two final games with a lot of tension, a lot of pressure -- and we're going to play our game."

Ahead of most Liga MX playoffs, an inevitable talking point that re-emerges before every Liguilla is the "curse" of the superlider, the club that finishes at the top of the regular season standings. Likely due to parity within Liga MX, it's not strange to see the best squad stumble in the playoffs and fail to live up to the hype that was built ahead of the knockout rounds.

On Sunday, No. 1 seed Pachuca played with the motivation of a team that wanted to dispel any and all doubts about themselves.

After earning a 1-1 draw in their away semifinal leg against No. 4 seed Club America, Pachuca followed up the tie with a convincing 3-0 win at home in Sunday's second leg. Efficient in their big chances in front of net, Los Tuzos were carried by a brace from Ecuadorian winger Romario Ibarra, as well as a goal from 22-year-old academy product Erick Sanchez.

Within 90 minutes on Sunday, Liga MX fans were given a perfect summarization of what Pachuca and manager Guillermo Almada have provided this season. Decisive in the final third, reliable in defense, and led by the standout goalkeeper Oscar Ustari, there's a lot to like about the roster that has a good balance of smart low-key foreign additions and homegrown academy talent.

One of those academy players, 21-year-old Daniel Aceves, took part in a heartwarming moment once the result was over. While his teammates walked over to the locker room after celebrating the victory, the young fullback went towards the stands of the Estadio Hidalgo and embraced members of his family in attendance. Although he made his Liga MX debut in 2020, Aceves didn't earn regular playing time until this season and has arguably been one of Liga MX's breakout stars of 2022.

Whether he and his Pachuca teammates can reach a second Liga MX title since 2016, remains to be seen. Atlas, despite their unexpected defensive lapses on Saturday, are a well-organized side that are able to shut down and halt attacking opposition just as well as Pachuca. Similar to Los Tuzos, the club also takes great pride in producing many of the country's rising talents in their famed academy program. The similarities extend to the sideline as well, with both Cocca and Almada making their squads (with mid-table total market values) into ones that are far greater than the sum of their parts.

Tactically, there are differences with Pachuca willing to be more attack-minded and shot-friendly, while Atlas aren't afraid to fight for balls and play direct, but we'll have to save the rest of that conversation for an upcoming preview.

Until then, both teams will be resting up before the much-anticipated two legs of the Liga MX final: At Atlas on Thursday and at Pachuca on Sunday.