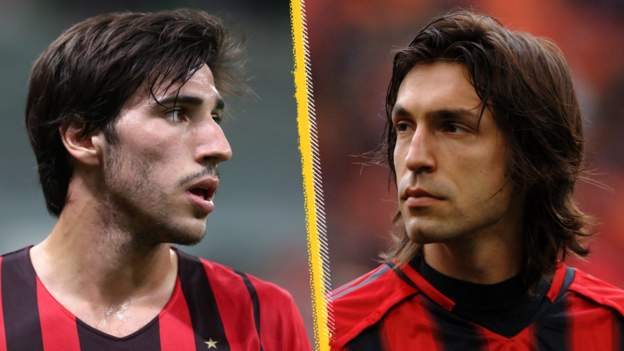 Sandro Tonali's 12th-minute free-kick gave AC Milan the lead in their 4-1 Serie A win against Cagliari on Sunday, 29 August

Sandro Tonali has been called 'the new Pirlo' ever since the start of his fledgling career - with the nickname first mentioned even before he had played a minute of senior football.

So when AC Milan's 21-year-old midfielder lines up at Anfield on Wednesday for his Champions League debut, he won't be put off by such lofty expectations, even if his game is actually styled on a very different Milan legend.

Tonali scored his first goal for AC Milan with a brilliant free-kick against Cagliari two weeks ago, an almost identical effort to Andrea Pirlo's debut goal for the club versus Parma back in 2002. The 'new Pirlo' tag was on everyone's lips again.

It has followed Tonali from the very first time his name was mentioned in the press. In July 2017, newspaper Giornale di Brescia published a feature about the promising youngster, headlined: 'A guy born in 2000 who moves and looks like Pirlo. With a hair like that, it is impossible not to notice him.'

Indeed, Tonali - who was 17 at the time, yet to make the first team debut for Brescia - had almost exactly the same haircut as the 2006 World Cup winner who started his professional career at the club in 1995, before signing for Milan and making 401 appearances for them.

With Tonali playing in a similar position to Pirlo on the pitch for Brescia, it proved to be a very difficult task to erase it from people's minds - even though his role model was a completely different type of player.

Tonali scored six goal in 88 appearances for Brescia Calcio, who are currently in Serie B

A diehard Milan fan, Tonali had always admired the skills of Gennaro Gattuso. After signing for the Rossoneri in the summer of 2020, following Brescia's relegation, he even personally asked his idol for permission to wear his number eight shirt - and naturally got it.

"The Pirlo comparisons started because of that haircut. They don't bother me, but they are not suitable. We are different on the pitch, and Pirlo had supreme qualities. I don't know who would be able to reach those heights," Tonali told Corriere della Sera two years ago.

Pirlo himself agrees, but in a different way. In May, the former Juventus coach claimed: "Tonali doesn't look like me as a player. He is much more complete, both defensively and offensively. He is a mix between me and other players. He is not my heir because he plays differently, but he will surely become a great footballer."

"The Pirlo comparison is a big misunderstanding," journalist Erica Bariselli tells BBC Sport. "Tonali is more powerful and dynamic, but less imaginative than Pirlo. When Pirlo was at Tonali's age, he wasn't as physically strong. Their characters are quite similar, though. Both were very sure of themselves as kids, both are reserved off the pitch, and both love to joke in the dressing room."

"Tonali is a stronger leader at Brescia than Pirlo was at his age. Like Pirlo, he is capable of providing assists and has great passing range," adds another journalist, Cristiano Tognoli.

Tonali had always been considered a top prospect at Brescia.

"When he made his debut in Serie B, club owner Massimo Cellino asked the coach not to play him until he signed a professional contract," Alessandro Rodella, a writer for Italian website TifoBrescia, said.

"Cellino promised Sandro to sell him to the club of his choice, and was true to his word. Naturally, the midfielder went to Milan, and even agreed to reduce his salary to stay at San Siro this summer."

Life at Milan hasn't always been easy for the youngster, who made just 17 Serie A starts last season.

Corriere dello Sport journalist Andrea Ramazzotti said: "He is at a big team now, and needed to gain experience. Tonali arrived with the 'new Pirlo' expectations, but after watching him in action everyone understands that he is more similar to Gattuso - he is good at recovering the ball."

"Sandro might have underestimated the differences between the clubs, and wasn't mentally ready last term. It is normal for such a young player. This season, he is more confident, stopped thinking too much and started playing at his true level. This could be his breakthrough season," Corriere della Sera writer Carlos Passerini said.

Tonali has impressed in his three starts this season, with Milan making a winning start to the campaign, and now he is ready for his Champions League debut at Anfield.

Regardless of comparisons, Liverpool would always be very special opponents for a Milan fan like him. The finals between the teams in 2005 and 2007 will stay long in the memory, with Pirlo and Gattuso playing a major part in both fixtures. Now Milan are facing their rivals for the first time in 14 years, and Tonali is out to write his own chapter.

"It can become an uncomfortable place": Why are so many girls dropping out of sport in their teenage years?Sebastian Vettel on allyship: Listen now as the Formula 1 star talks about the importance of visibility