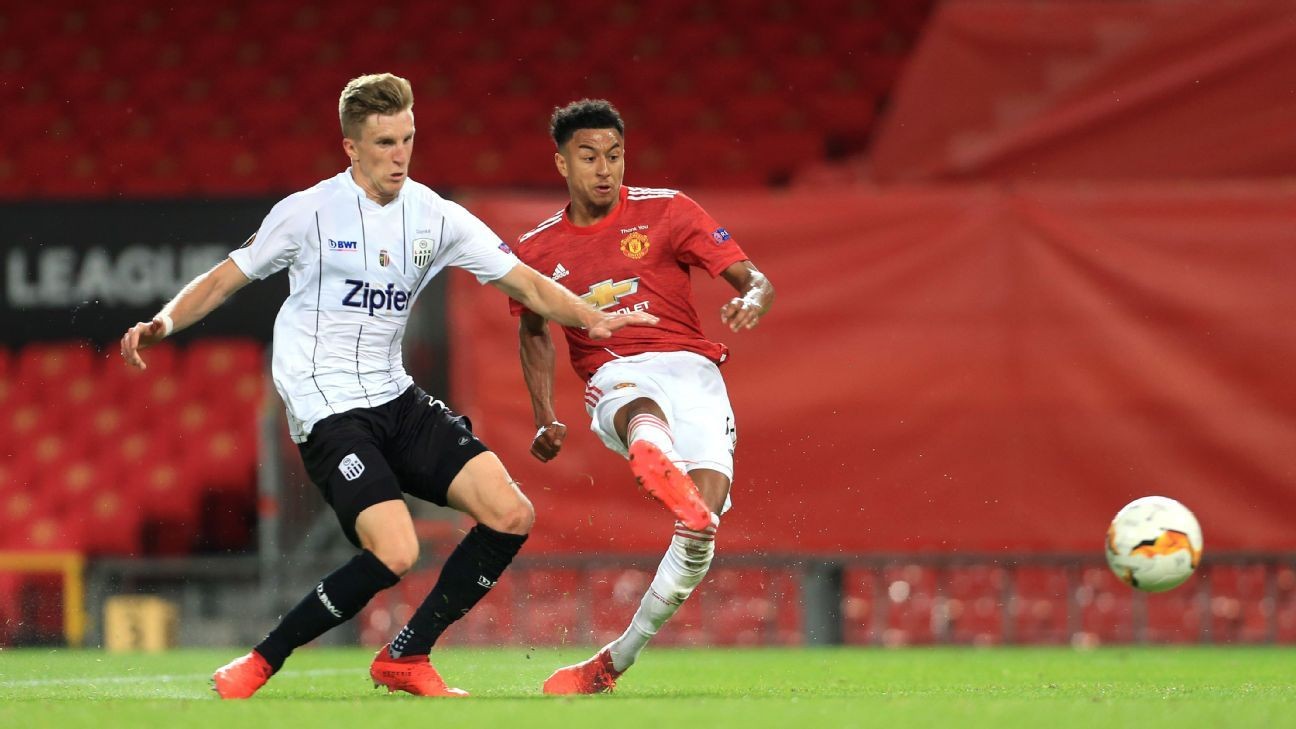 MANCHESTER -- Manchester United made sure of their place in the quarterfinals of the Europa League with a 2-1 win over LASK Linz at Old Trafford.

Ole Gunnar Solskjaer's side won the tie -- separated by nearly five months because of the coronavirus pandemic -- 7-1 on aggregate after a 5-0 win in Austria in March and will face FC Copenhagen in Cologne on Monday in the last eight. LASK started with very little chance of qualifying but did take the lead when Philipp Wiesinger guided an effort into the top corner from 20 yards after 55 minutes. But any hope of a fight back was snuffed out by Jesse Lingard's equaliser two minutes later before substitute Anthony Martial got the winner two minutes from time.

Lingard has had a tough season but he made it two goals in two games with the equaliser here. He will find it hard to dislodge any of Solskjaer's preferred front five when the Europa League mini-tournament kicks off in Germany on Monday, but he has done enough in the last two games to show that he still has a future at Old Trafford.

If this was a test of United's squad players, very few took their chance. The likes of Fred and Daniel James have found opportunities limited since the restart as Solskjaer used the same core players to carry him through the Premier League run-in, and there was nothing here to suggest they won't be back on the sidelines for the final rounds of the Europa League.

Ole Gunnar Solskjaer, 6 -- Solskjaer has rotated heavily in the Europa League with Timothy Fosu-Mensah becoming the 36th different player to play for United in the competition this season. But the chopping and changing will stop when United face Copenhagen. Expect Solskjaer to revert back to his first-choice XI when he gets to Germany as he looks to win the first trophy of his reign.

Jesse Lingard was lively and added a well-taken goal in a rare start for Man United as Ole Gunnar Solskjaer's side cruised into the Europa League quarterfinals. Simon Stacpoole/Offside/Offside via Getty Images

GK Sergio Romero, 7 -- Should have played in the FA Cup semifinal against Chelsea. Picked against LASK, he was as consistent as ever and made three good saves.

DF Timothy Fosu-Mensah, 6 -- Probably should have done better with the clearance from which Wiesinger put LASK in front.

DF Brandon Williams, 6 -- Slid an inviting pass across the face of goal that should have been converted by either James or Lingard. Will have a big role to play in Germany with Luke Shaw injured.

DF Harry Maguire, 7 -- Picked to start his 59th game of the season. Went close with two headers in the first half and defended well.

DF Eric Bailly, 6 -- Pace was useful at the back and calm enough on the ball to get himself out of trouble when LASK pressed.

MF Scott McTominay, 6 -- Hesitated on the edge of the area when he was sent through by Fred. Served as a constant vocal presence in midfield.

MF Fred, 5 -- Struggled early on but played one wonderful pass down the left to send James flying down the wing.

MF Jesse Lingard, 7 -- Pulled off a clever flick from Scott McTominay's pass to give Odion Ighalo the chance to open the scoring. Scored for the second game in a row with a calm finish under pressure.

FW Juan Mata, 7 -- Set piece delivery was good and his smart pass round the corner gave Lingard the chance to equalise. Created Martial's winner late on.

FW Daniel James, 5 -- Got into plenty of good positions, but too often let himself down with his final ball.

FW Odion Ighalo, 6 -- Battled away up front and held the ball up well. Will be disappointed not to convert one of a couple of chances that came his way.

DF Tahith Chong (for Brandon Williams, 72), N/R -- Came on too late to make much of an impact.

FW Anthony Martial (for Daniel James, 84), N/R -- A late sub to get some fitness, he scored near the end to give United a win on the night.

DF Teden Mengi (for Timothy Fosu-Mensah, 84), N/R -- The latest product of Man United's youth academy, he made his debut in the closing minutes.