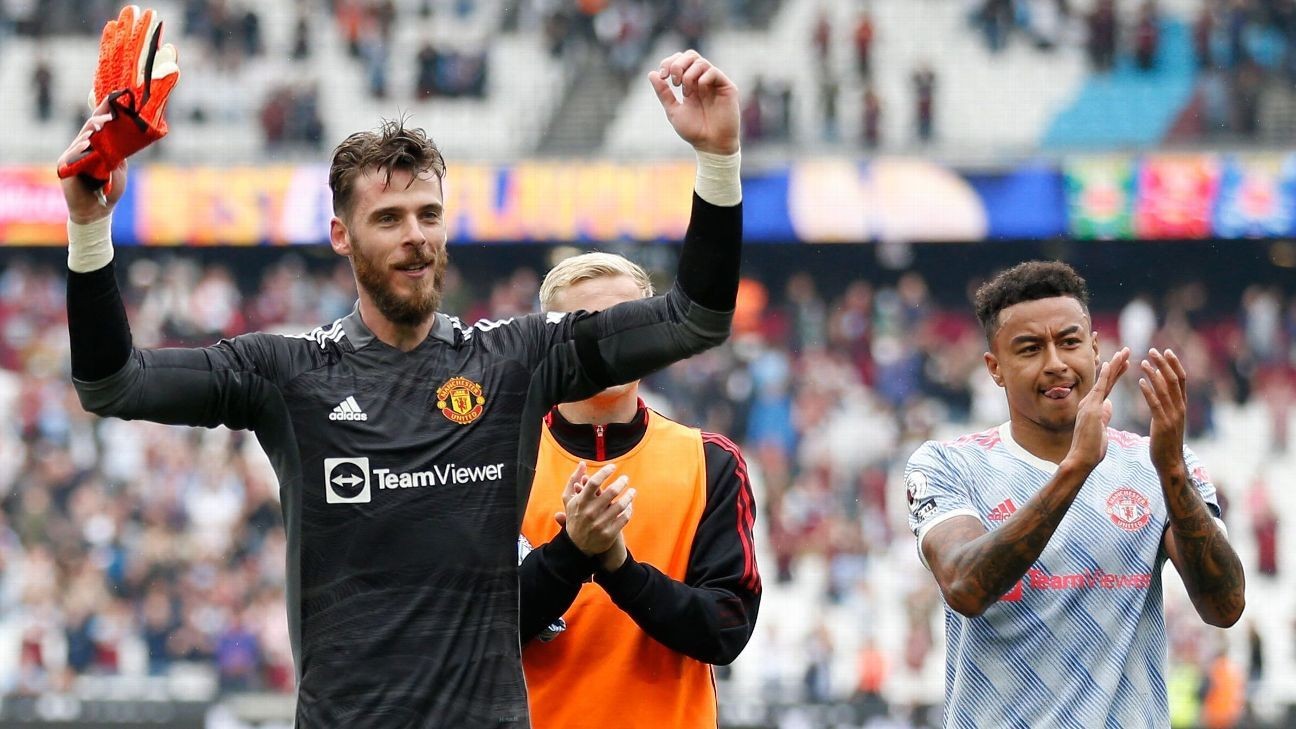 LONDON -- After criticism of his tactical approach during the Champions League defeat to Young Boys on Tuesday, Manchester United manager Ole Gunnar Solskjaer was in no mood to get into the finer points of his football philosophy ahead of the trip to West Ham United.

"Football is a simple game," he said. "Sometimes we look too much into the intricacies to explain it but it's about passion and desire."

If nothing else, Solskjaer's team has enough of those qualities, with Sunday proving the latest example; in a game they might have lost at the London Stadium, Man United ended up with a 2-1 win.

It helps, too, when you have a striker of the quality of Cristiano Ronaldo and so many options in your squad that you can replace Paul Pogba and Mason Greenwood with substitutes like Jadon Sancho and Jesse Lingard.

It was Lingard who scored the winner against the club for whom he impressed on loan last season, although Man United also needed David De Gea to save Mark Noble's stoppage-time penalty to make sure they returned home with all three points.

The dramatic win maintained an unbeaten start to the Premier League season for Solskjaer's men and marks only the second time in 10 years that Man United have been unbeaten after five games. They have also gone 29 away games without defeat in the league, dating back to January 2020.

"We are very happy with the win and we deserved the win," said Solskjaer afterward. "We played some very good football, created good chances and we pressed them into making loads of mistakes."

During his discussion of tactics at a press conference on Thursday, Solskjaer insisted games are more regularly decided by "which one of the strikers has the desire to get on the end of crosses." On Sunday, Ronaldo again stepped up in that regard.

There can be little doubt that Man United team will have to improve before being considered genuine title challengers alongside Manchester City, Liverpool and Chelsea, but while the Norwegian tries to work out a way of getting Ronaldo, Pogba and Bruno Fernandes to gel, the Portuguese forward is proving useful at papering over cracks.

Of the seven goals Man United have scored since his debut, Ronaldo has got four and, while his equaliser against West Ham will not trouble judges of the Puskas Award, it was the type of goal they have missed. He is in the right place at the right time, a lot.

That 35th-minute strike covered up a disjointed first-half performance. As was so often the case last season, Man United started slowly and deserved to go behind after half an hour, even if the manner of the goal was unfortunate.

Jarrod Bowen had already gone close twice -- once after Harry Maguire had been robbed of possession inches from his own penalty area -- when Said Benrahma's shot hit Raphael Varane and sent De Gea the wrong way.

But Solskjaer had promised a reaction to the shock Champions League defeat to Young Boys and Man United, to their credit, responded well. Fernandes clipped a cross into the penalty area and Ronaldo ran off Aaron Cresswell and having seen his goalward flick saved by Lukasz Fabianski, stayed alert to tap in the rebound.

Subjected to boos and jeers by the home fans all afternoon, Ronaldo collected the ball out of the net and gave a "calm down" gesture toward the stands. Baiting him rarely works and he remained Man United's most likely threat.

Moments after his goal, Ronaldo was played in down the right and forced Fabianski into a good save. West Ham defender Angelo Ogbonna, having tried to keep up, puffed his cheeks as he picked himself off the floorx, wearing the look of a man who realised it could be a long afternoon.

It is bound to be when your opponents have Sancho, Lingard, Donny van de Beek, Juan Mata and Anthony Martial on the bench, and despite West Ham stifling Man United's attack for the next 40 minutes or so, Solskjaer's squad depth was too much in the end.

Having come on with Sancho after 73 minutes, Lingard collected a pass from another replacement, Nemanja Matic, before cutting in from the left side of the penalty area to launch a shot into the top corner. The goal was redemption for a player, who not only became a favourite for West Ham fans last term, but was looking to respond after a poor backpass led to United's midweek defeat.

Solskjaer, meanwhile, had some vindication of his own game management, given the role of his substitutes, and was especially effusive of Lingard following the 28-year-old's difficult week, which came after he opted not to leave Old Trafford.

"Jesse was quite clear [in the summer] he wants to fight for his place and be part of a Man United team that is going places; he's really contributing," Solskjaer said. "I'm so pleased he handles the highs and lows really well. He's becoming a grown man and is a very good player."

But despite such a late goal, there was time for more drama as the game drew to a close. Deep into stoppage time, having waved away repeated claims from Ronaldo for penalties, referee Martin Atkinson went to the video screen before deciding Luke Shaw handled Andriy Yarmolenko's cross.

De Gea, who was criticised for his failure to save any of the 11 penalties he faced against Villarreal in the Europa League final shootout in May, guessed right and saved from Mark Noble, who had been brought off the bench to take the spot kick.

Noble's previous penalty miss and De Gea's last save both came in 2016 but, in a high-pressure moment, the tables were turned and Man United -- players and manager alike -- mobbed their goalkeeper at full-time. Football can sometimes be hard to explain.