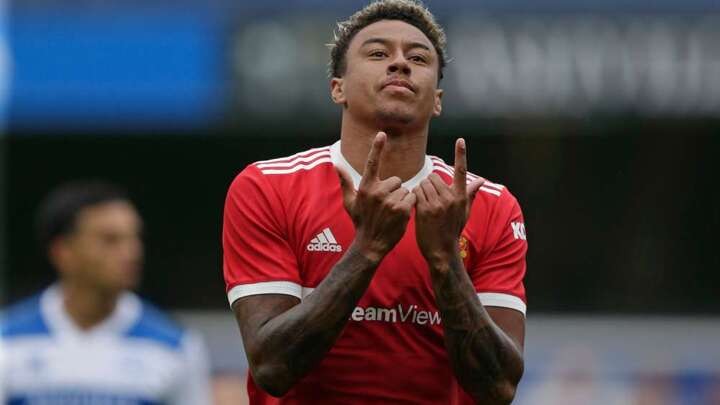 In an ideal world for Ole Gunnar Solskjaer his Manchester United side would convincingly win all of their pre-season friendlies and the whole squad would come through unscathed fresh for the new season.

Queen’s Park Rangers spoiled that ideal outcome on Saturday, however, as they beat United 4-2 through a second-half attacking onslaught. But with more minutes for every member of the Red Devils' outfield squad it was still a worthwhile trip for Solskjaer’s side with the start of the Premier League campaign just three weeks away.

Here’s a look at three things we learned from the defeat.

For Jesse Lingard it has been a case of picking up exactly where he left off last season while on loan at West Ham.

After an impressive performance in Manchester United’s opening pre-season victory against Derby he was on the scoresheet within three minutes.

Mason Greenwood found Facundo Pellistri who slipped a ball through to the England international and he made no mistake side-footing his finish past Seny Dieng. The 28-year-old was keen to be involved in everything United did going forward; he constantly pointed to where he wanted the ball played and looked to make those dangerous runs in behind.

Solskjaer, whose new three year deal was announced a few hours before kick off, does not need these pre-season games to know Lingard’s potential.

“Jesse has come back, been bright, he wants to fight for his place and there's nothing better than seeing players want to fight for their place,” Solskjaer said after the win against Derby.

“He came seven or eight days later than the rest but he's a naturally fit boy. He's a man, he played with a few boys but he's one of the men.”

While he has been one of the standout players in United’s opening two pre-season fixtures the bigger question for Lingard is how, and if, he can fit into Solskjaer’s first team plans when the competitive action starts in three weeks' time.

“What he did towards the end of last season, that's the true Jesse, that's what we know he's capable of and I think we saw towards the end that we lacked some options at times and Jesse is in the plans at the moment, yeah,” Solskjaer said.

It depends on what level Lingard features in those plans as to whether or not he’s happy with what his manager has in store for him. It is understood Solskjaer is looking to play a more attacking 4-3-3 formation next season which could see them start with just one defensive midfielder and open up the opportunity for more attacking options. Which, on the face of it could be good news for Lingard.

But, this is, in his words, Jesse Lingard 2.0. And he wants to be a regular starter wherever he is playing. It is highly unlikely he will displace Bruno Fernandes from the team in his favoured No 10 position and while he can play out wide Solskjaer has a multitude of options there and it’s not his ideal position.

With a number of teams showing interest in signing him it will be a tough decision for both Solskjaer and Lingard as to what is best for him next season.

Centre-back Will Fish was the latest of United’s young crop to secure a loan move with the club confirming on Friday he will join National League side Stockport County for the start of the new campaign. Fish got the last 10 minutes at Loftus Road but it was clear on Saturday afternoon’s evidence that he is not the only young player who would benefit from a loan move.

Charlie Austin managed to get in between Axel Tuanzebe and Teden Mengi too easily for his equaliser and both of them would benefit from a season of regular starts. Mengi impressed on loan at Derby in the second half of last season while Tuanzebe is expected to head out this season.

The level of Under-23s football doesn’t present them with enough of a challenge to improve, and at times while they struggled against a fitter Championship side it was obvious that regular grown-up football would make a big difference to their decision making, confidence and consistency.

Expect plenty of those who featured in the second half to be heading out on loan this season.

With United 4-1 down the QPR fans were singing ‘can we play you every week’ and then followed the inevitable Ole Out tweets on social media. How very predictable on the day it was announced the Norweigan had signed a new three-year deal.

There was also a clamour from certain parts to sign Real Madrid defender Raphael Varane. United are interested in the centre-back and working on a deal but that has nothing to do with the performance of centre-back pairing Teden Mengi and Axel Tuanzebe in exhibitions.

In fact when those lyrics rang out around the stands the team that was on the pitch was a U23 outfit featuring Juan Mata and Lee Grant, plus Shola Shoretire, Joe Hugill, Hannibal Mejbri, Di’Shon Bernard, James Garner, Dylan Levitt, Ethan Galbraith and Fish. They were beaten by three goals in seven minutes but it was a learning curve nonetheless.

Elanga took his goal well after spurning a previous chance and at times they all showed flashes of potential that would benefit from a loan spell.

Every single outfield player benefited from more minutes, there were no injuries and another chance for Solskjaer to experiment. It wasn’t the ideal result but not one that will have any bearing on anything in the future, definitely no need for hysteria.