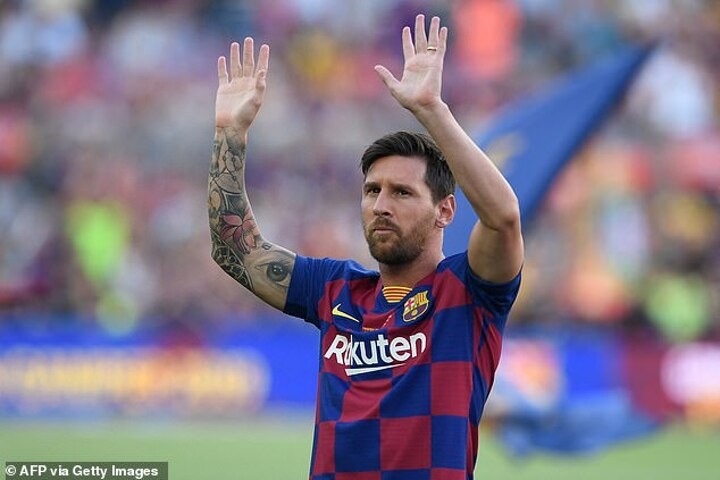 Lionel Messi's boyhood club Newell's Old Boys poked fun at the Argentina star's Barcelona exit by joking they want him back - posting a meme of them 'praying' to god for his return.

Messi's 21-year spell at the Nou Camp is over after the Catalan outfit confirmed he would not be continuing with them after talks over a new deal were scrapped - with the player reportedly making a dramatic U-turn on his decision to sign new terms.

Barcelona blamed LaLiga over 'economic obstacles' as they struggled to accommodate the Argentine wizard and his astronomical wages on their books amid financial uncertainty at the club.

Messi - who was said to be unhappy about taking a pay cut and the current state of the Barcelona squad - is now plotting his next move, with PSG and Manchester City said to be leading the race for his signature, but Newell's have jokingly thrown their hat into the ring.

The club - which Messi joined as a six-year-old - jumped on the bandwagon following news he would be leaving Barcelona this summer but quote tweeting the Spanish club's announcement and attaching a meme of a dog wearing a hat.

The caption underneath it reads: 'Hola Dios, soy yo de nuevo', which translates to 'Hi God, its me again.'

Newell's will need more than just the power of prayer if they hope to land Messi - with the player earning around £437,000-a-week during his last contract in LaLiga - a price only PSG and City would be able to afford.

'It's a decision exclusively made by him and his family,' he said. 'We have to have the best possible context to help make a decision.

'When Maradona came to Newell's, nobody thought that he would come either. I hope to do something similar with Leo.'

D'Amico added: 'Obviously, that's not to be selling smoke. It's a difficult topic.

'What Newell's fan would not dream to see the best player in the world with the jersey of their team on? Time might allow such things, you have to be calm.'