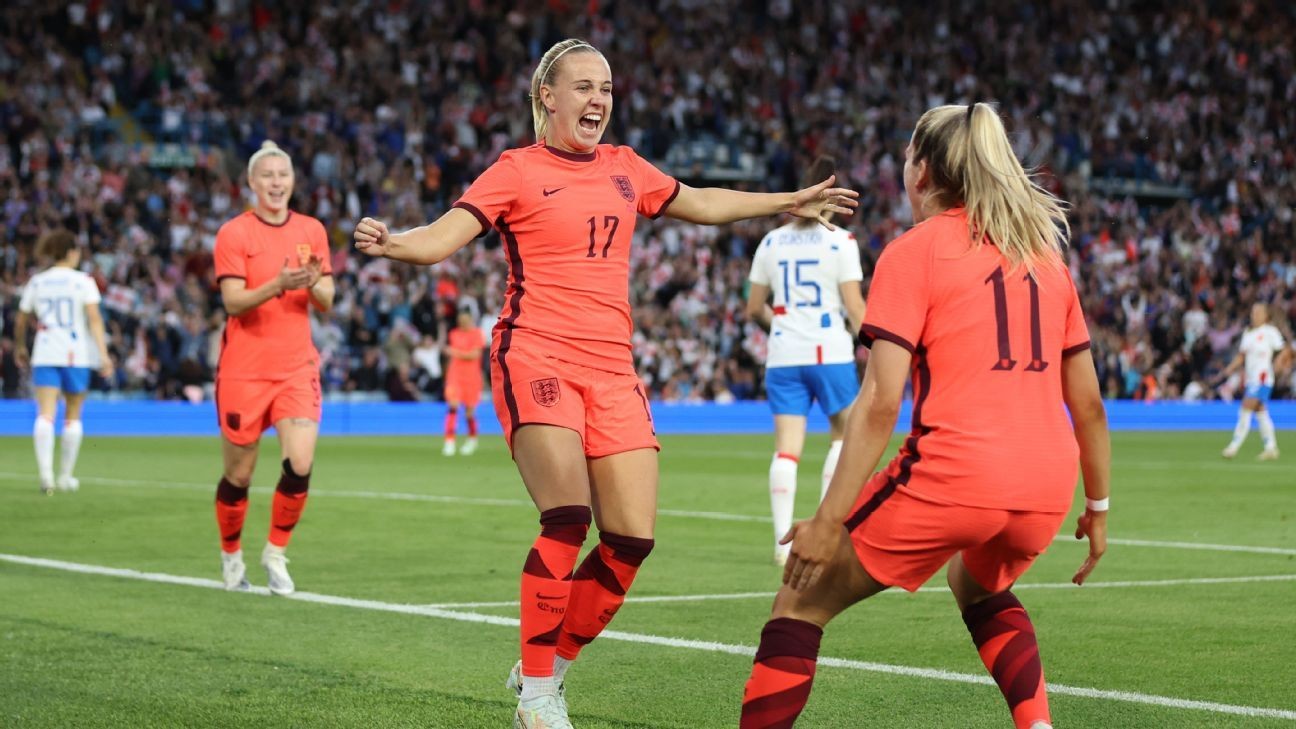 In an ideal world for England, by the time July 31 ticks around, the intricacies of this impressive 5-1 win against the Netherlands on Friday will be long forgotten. This brilliant result will be regarded as a fundamentally important lesson and confidence boost as part of their journey to a European Championships final on home turf.

Or alternatively, if England fall short in the Euros, then we'll look back on this match as a cautionary tale in which they failed to recognise and solve some of the warning signs on show in the first half at Elland Road before England pulled away.

But ultimately, when you beat the reigning European champions 5-1 and showcase the brilliant depth within your squad, then you have justified your moniker as one of the pre-tournament favourites, especially when the competition is in your own back garden.

All in all, this was the perfect night for England manager Sarina Wiegman against her former side. The Lionesses got yet another win -- extending Wiegman's unbeaten run as England manager to 13 on the bounce since she took charge in September 2021 -- in arguably their best performance yet. They showed the ruthlessness she called for pre-match in the second half. And they came through injury free to give themselves the perfect send-off ahead of their last warm-up match in Switzerland on Thursday before their tournament opener at Old Trafford on July 6.

Wiegman judged her substitutions perfectly and, after a shaky first half in which England struggled to play out from the back and through the Dutch high press, the introduction of Beth Mead at half time and the next batch of reinforcements on the hour mark swung this match in England's favour.

"It was a tight game at the highest level," Wiegman said post-match. "In the first half we had a hard time, and in the second half it went better. It was good we got behind for the first time and how we reacted from that and how we came back from not playing well."

England headed into this match with questions to answer after their 3-0 win over Belgium last time out. They had 25 shots in that match, scoring just three, with two own goals. Wiegman called for more ruthlessness and eventually they answered the challenge against the Dutch.

This was an England team minus the absent Ellen White, who tested positive for COVID-19 -- she has so long been the answer when England have struggled to find a breakthrough. It was also going to be their sternest test since facing Spain, Canada and Germany back in February, and a real examination of the centre-back partnership of Millie Bright and Alex Greenwood. It also gave Wiegman a chance to juggle her midfield options with Fran Kirby returning for her first start for club and country since February, while Chloe Kelly got the nod on the right wing in her first England start in 11 months.

Lauren Hemp and Beth Mead, two England players who stepped up in a 5-1 win over the Netherlands, celebrate at Elland Road on Friday. Marc Atkins/Getty Images

In the end, there were plenty of positives. Lauren Hemp was again outstanding as her cross gave Mead a comfortable finish just eight minutes after she came on to make it 2-1 after 53 minutes. She kept on pulling and pushing away at the Netherlands' right side and eventually they gave way again for Hemp's first, and England's fourth as she struck a wondrous volley into their far corner. Most of England's impressive play went down that left wing in the second half, while Ella Toone also came off the bench to score a neat effort from the edge of the box. Hemp is going to be one of the stars of the Euros next month.

Kirby impressed in her first start for club and country since February after navigating her problems with fatigue. She played in the No. 10 spot and was a constant mischievous presence. Her performance will give Wiegman reason to smile as she finishes moulding her midfield three. On this evidence, Kirby must start against Austria on July 6 in the Euros opener. And the same goes for Mead who scored her 13th and 14th England goals this season as her introduction was a lightning bolt to her team's intensity and swung the tide back in the hosts' favour.

Elsewhere Rachel Daly impressed at left-back on her 50th cap, and it's going to be a flip of a coin between Daly and Demi Stokes for who starts there in their opener.

And from their competitors' point of view, they'd have taken note of the incredible strength on England's bench with the likes of Toone and Alessia Russo also impressing. "It was a great result for us and it shows the quality we have in the team," Mead said post-match on ITV. "These games are for learning and we take confidence from this heading into the Euros."

But most of England's lessons from this match will have to come from that tricky first-half. The eventual score line was lopsided after a first 45 where England looked a bit shaky. Time and time again the Netherlands caught England on their heels in their own box as they tried to play out from the back. Lucy Bronze, Mary Earps and Millie Bright were all caught at various stages.

It was Bright's misplaced pass after being caught in possession that led to the first-half corner from which the Netherlands opened the scoring after 22nd minutes. Sherida Stitse, on her 200th appearance, swung a corner in for Lieke Martens to head home. It was the first time England had been behind under Wiegman and England looked flat.

The Lionesses were also struggling to create chances up front with Kelly and Beth England forced to feed off scraps, and Bronze's equaliser in the 32nd minute was fortuitous as her dinked cross found Sari van Veenendaal's back post, rather than one of the on-rushing players.

With the score locked at 1-1 at the break, England opened the second by playing with more spark, but got caught short in the 53rd minute as Greenwood scythed down Danielle van de Donk in the box to give the Netherlands a penalty. Spitse missed past Earps' left post, and 53 seconds later, Mead was there to rifle home Hemp's brilliant cross. From there England went up a gear with Toone and Hemp scoring alongside Mead's second.

But Wiegman would have taken note of how much more stable they looked at the back when captain Leah Williamson shifted from midfield to centre back in Greenwood's place, once Georgia Stanway had come on for her in the 61st minute. England had more balance with Williamson alongside Bright as they prevented one of the world's best strikers in Vivianne Miedema even getting a kick. For so long it looked like the starting partnership would be Bright and Greenwood, but perhaps this may give Wiegman a late change of heart.

It was a strange night of juxtaposition at Elland Road. England were in orange, managed by Dutch manager Wiegman against a Netherlands team wearing white, coached by Englishman Mark Parsons. It was also the pretenders against the champions. Five years ago it was Wiegman who led the Netherlands to the European Championships and again tonight she showed why she is one of the world's best managers as her England side eventually swiped aside her former charges.

England will be hoping the Wiegman factor will be the secret to turning two successive semifinal finishes in the last two major tournaments into a final appearance and potentially silverware.

At the end of the match England were in a circle in the middle of the Elland Road pitch. They sang along to "Sweet, Caroline" and all was well. But Wiegman knows full well bigger and sterner tests await her side over the next six weeks.