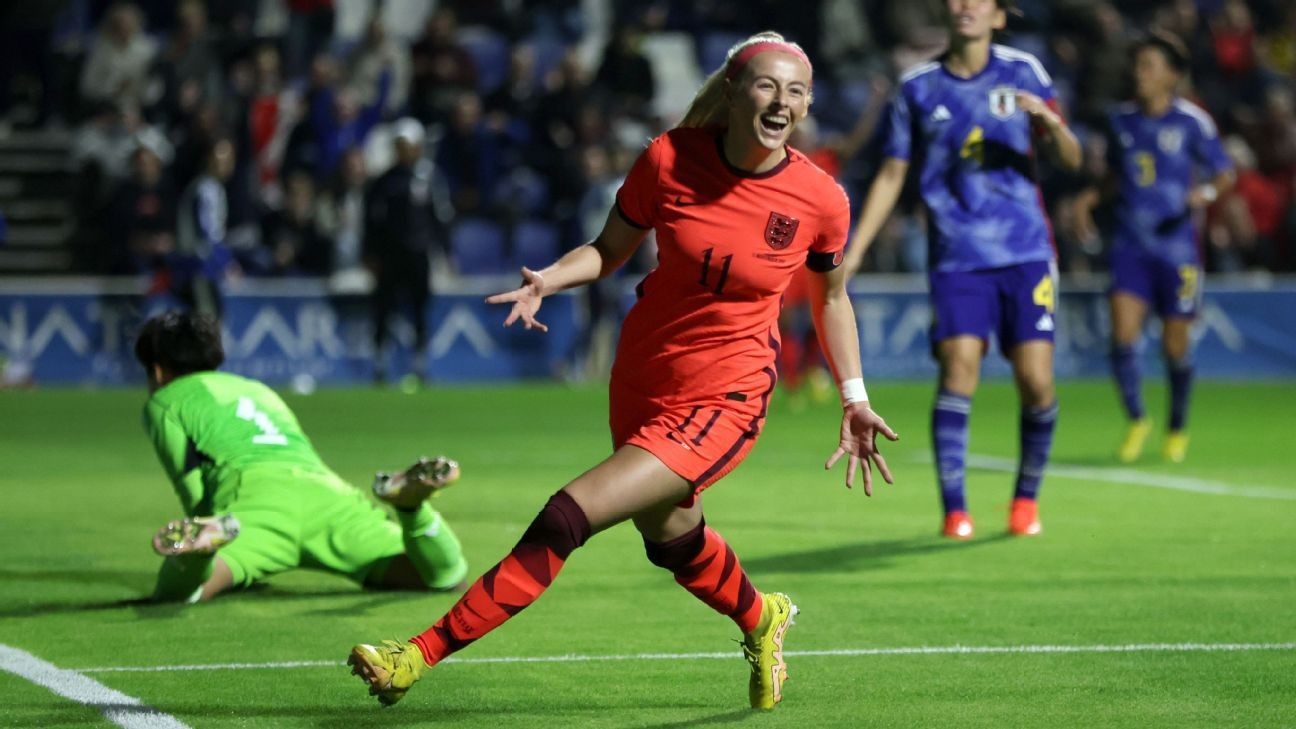 England have extended their unbeaten run under manager Sarina Wiegman to 25 games with a 4-0 win over Japan on Friday night. Goals came from Rachel Daly, Chloe Kelly, Ella Toone and Jess Park.

In one of the final international match windows before the Women's World Cup next summer, the Lionesses continue their dominance after winning the 2022 Euro, and ESPN's Sophie Lawson has reaction and analysis from Friday's match.

Rapid reaction1. England are better when they can utilise the full width

Still playing confident football after their success at the European Championships this summer, the front three of Chloe Kelly, Alessia Russo and Beth Mead are seemingly the favoured trio for coach, Sarina Wiegman. Indeed, the team were at their best when they could bring Mead and Kelly into the game.

Most of the better attacks from the Lionesses came when Kelly was involved and sending balls in from the left -- a role usually occupied by Kelly's Manchester City teammate, Lauren Hemp who withdrew from the England squad with the knock.

With Rachel Daly still the first choice at right back -- a controversial call from Wiegman with Daly playing in the attack for her club team -- the 30-year-old showed the value of having her on the pitch when she raced onto an uncleared ball and sent it home.

With Japan cluttering the middle of the pitch, using the full width would have been the no-brainer from the coach but it was not only a way of getting around the Japanese defensive efforts but playing to England's strengths.

A once great team, Japan have looked particularly off colour over the last few years, now onto their second coach since winning the World Cup in 2011, there are questions of whether the team will ever recapture their former glory.

How Women's World Cup contenders shape up in the international break3dSophie LawsonLapses doom the USWNT to third straight loss -- and a rare home defeat2dSophie LawsonWhy Carson Pickett's limb difference hasn't stopped her from the USWNT or maybe, she hopes, a World Cup3dGwendolyn Oxenham

Often likened to Spain thanks to their fondness for technical players who excel with the ball, it's easy to see how they struggle when they're not allowed to stroke it around the pitch. Indeed, it was being kept off of the ball at the Pinatar Arena that caused all the problems for Japan as they failed to build up an attack.

Compounded with the use of Mana Iwabuchi as a false nine for the first hour, Nadeshiko not only struggled to string offensive passages of play together but found themselves without a focal point on the rare occasion they got forward, without ideas of how to break down the English backline.

For a team that likes to press high, especially when starting three across the front, England have a longstanding, and quite unfortunate, habit of straying offside, one that stretches beyond the current crop to elders such as Ellen White and Jodie Taylor. Even Daly who plays in defence for England has long suffered the same affliction as other English attackers.

Although it's devolved to the point of a light joke, at the highest levels -- and with video technology now in use at major women's tournaments -- those narrow margins are the ones that can lose you games, as England found out in their World Cup semifinal against the USA in 2019.

With more than a hint of offside in the build-up to England's second goal, and the match not completely closed out until late in the day, there is a slight cause for concern around England's ability to hold their lines when attacking.

At the heart of England's best chances, Kelly provided far more than just a goal in Murcia.

There were few bright notes for Japan but Iwabuchi consistently struggled to offer positive options, her lack of recent match time more than coincidental.

England: The Lionesses continue to utilise the international break to face quality opponents when they face Norway again on Tuesday, Nov. 15 in Murcia, Spain.

Japan: This international break won't get any easier for Japan as they will face Spain on Tuesday, Nov. 15 in Sevilla, Spain.