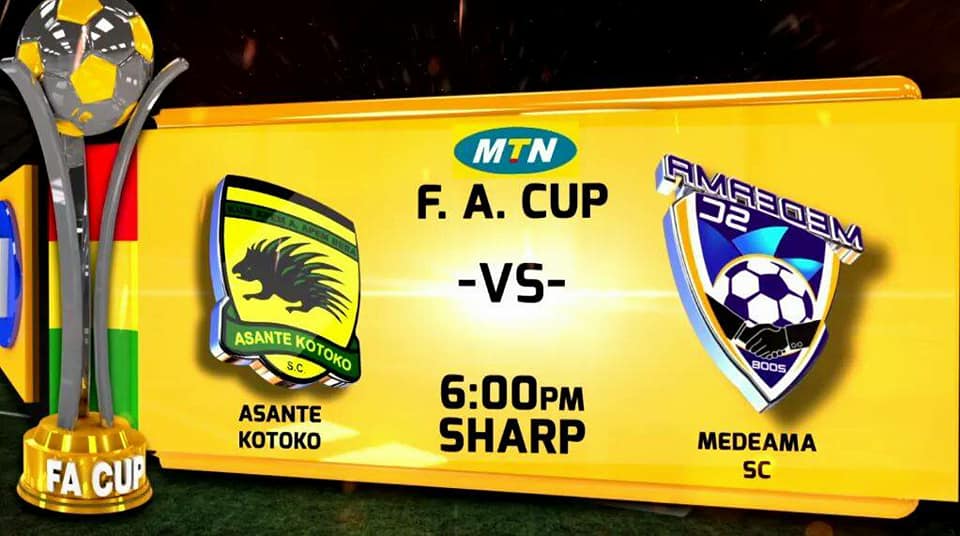 Follow the LIVE play-by-play of the 2017 MTN FA Cup semi final clash between Asante Kotoko and Medeama SC on GHANAsoccernet.com from the Len Clay Stadium in Obuasi.

Hello good afternoon and welcome to the LIVE coverage of the second semi final of the 2017 MTN FA CUP clash between  Asante Kotoko and Medeama SC at the Len Clay Stadium in Obuasi.

The game was rained off after 15 minutes of electrifying action and will be replayed this afternoon at exactly 15:00GMT at the same venue - The Len Clay Stadium.

Hearts of Oak saw off the opposition from Wa All Stars in the first semi final game with a 2-1 win following a goal each from Patrick Razak and Kwame Kizito despite Atta Mensah pulling one back for the Northern Blues.

We are glued to our seats, itching to watch the war between Kotoko and Medeama SC.

Stay connected as we  take a look at the line ups of both teams shortly. 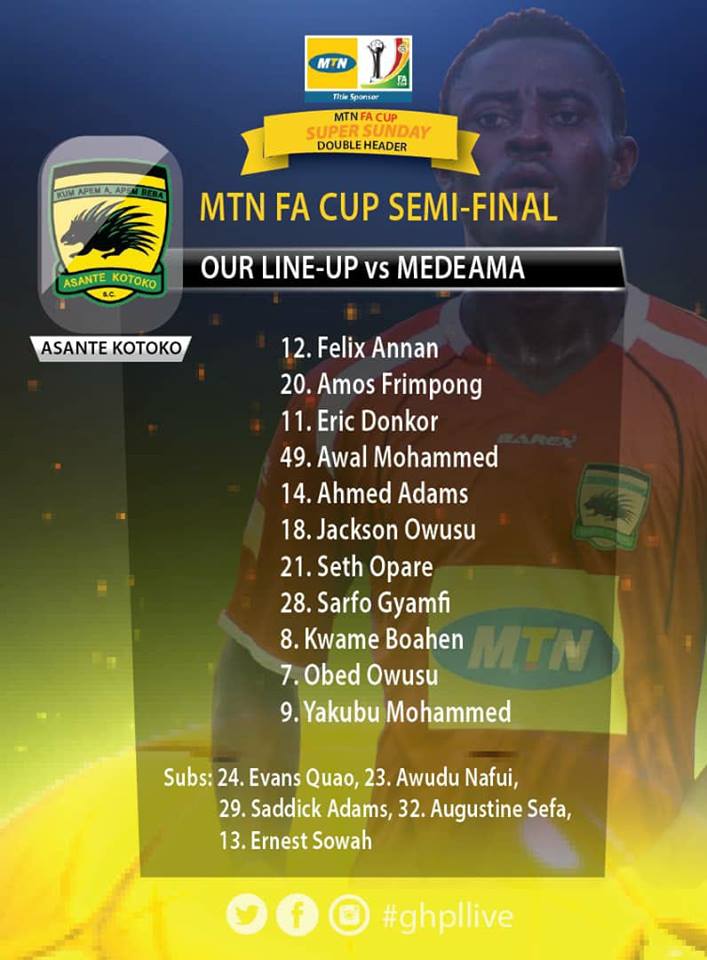 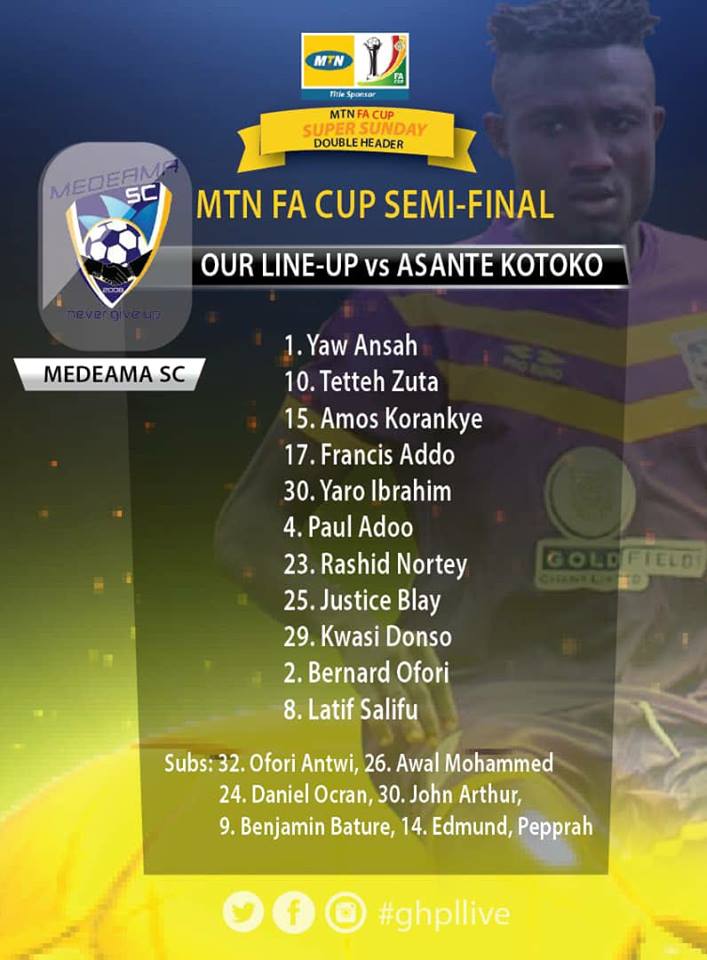 05'- Brilliant exchanges from both sides with slightly low intensity as compared to last night's.

08'- Beautiful play from Medeama, great drive from Kwasi Donsu but misses the post by inches. Kotoko heeve a sighof relief

15'- Nice dribble from Sarfo Gyamfi, send a long one in but Kwame Boahene final touch, poor.

17'- Kotoko dominating possession at this moment. Medeama coiling - counter attack in their minds I guess

27'- YELLOW CARD: Francis Addo booked for angrily challenging the referee for whistling Latif Salifu offside. Latif himself should have been yellow carded for madly kicking the ball away

30'- We are on the half hour mark and the game is yet to live up to the hype.

33'- Free kick for Kotoko. Could it be the deciding moment? Headed out!

34'- Kotoko surging close to the opener.  Kwame Boahene weaves through the Medeama midfield and sends a drive but Ansah saves. Corner kick.

35'- Medeama start attack. Latif Salifu sends a long one in but Eric Donkor head the ball away.

36'- Medeama turn attack into defence now as Yakubu brings down his marker. Foul for the Mauve.

38'- Medeama growing in confidence gradually. Attacking Kotoko now but Jackson strongly wins the midfield battle, sends a good one to Yakubu but the ball has been scooped away from him.

40'- Yakubu again, in a physical duel with the goalkeeper, wins the ball but sends it out of goal. Medeama not troubled at this time

41'- Cynical tackle from Evans Quao on Kwasi Donsu. A yellow card wouldn't be a bad idea. Free kick for Medeama

42'- Donsu position of a free kick. But the technician misses the post by inches with his characteristic drive.

44'- Medeama win a foul. Zuta send a long one in but Kotoko win back possession.

HT: Kotoko 0-0 Medeama - Very cautious first half from both sides. Scared to take risks. Not too electrifying as many expected. Not many chances created. Perhaps the coaches can create magic in the second half to bring out the goals.

50'- Game resumes. Medeama looking more organised and purposeful than before.

51'- Sarfo Gyamfi with the best of chances in the game. Comes one on one with goalkeeper Ansah but hits a hard one over the bar.

58'- Sarfo Gyamfi again. Takes on two defenders, sandwiched between them but shouts for penalty ignored. Referee had it right.

62'- Corner kick for Kotoko. Eric Donkor hits one in but goalkeeper Ansah releases a heavy punch.

66'- Sadick Adams with his first touch almost resulting in the opener but Ansah saves. Goalkeeper in pain.

68'- Dangerous move for Medeama - Sadick lands a good pass from Jackson sends it back to Jackson to finish but Medeama regroup.

75'- Ahmed Adams given a verbal caution by Referee Awal Mohammed for a bad tackle on Abdul Rashid.

80'- Sarfo Gyamfi tees one into the 18 box of Medeama, Sadick Adams controls beautifully but hits a feeble one into the waiting arms on Ansah. The fans are angry.

81'- Sadick with a swift free kick,  gets the wall pass from Jackson but Yaw Ansah pulls a brilliant save again from Sadick's thunderous strike.

89'- Medeama now pushing for the opener. Win a throw-in in the process. A long one sent in but ball has been booted away.

90'- Three minutes of time added on. Can the deadlock be broken here?

90+1'- Calls for penalty ignored once again as Jackson Owusu goes down.

Extra time to be played. That is the rule for this competition.

ET14'- Another penalty call ignored but I think referee got it wrong this time. Sarfo Gyamfi was seriously tackled. That should have been a penalty. Wrong call from the center man.

Kotoko’sJackson Owusu appears limping in pain but sadly, the Reds have exhausted all their subs.

ET28'- Another Kotoko player down. Awal Mohammed this time. It appears the ball went straight into his private part.

ET30'- Medeama swiftly charges for another attack but Annan goes down d after an aerial challenge.

ET32'- FULL TIME: Kotoko 1-0 Medeama -  Asante Kotoko laugh last after putting up an improved performance in the extra time. Sadick Adams' goal on the stroke of half time in extra time was enough to see the Porcupine Warriors through. A thrilling final awaits all in Tamale on October 29 as bitterest rivals Kotoko and Hearts clash in the FA Cup finals.