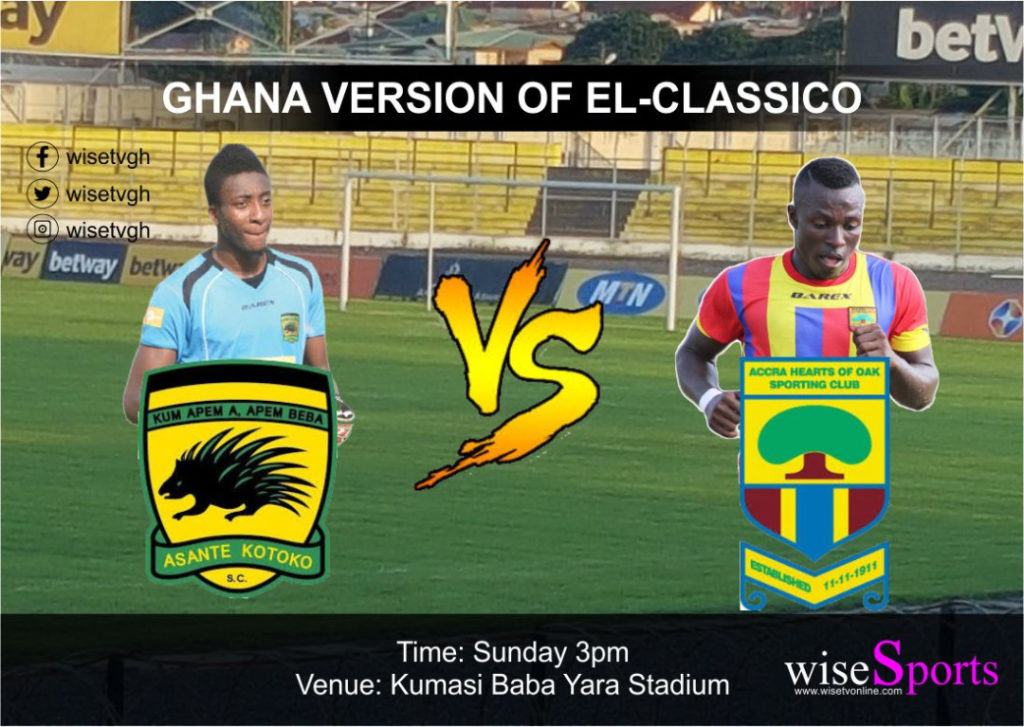 Follow the LIVE play-by-play of the epic Ghana Premier League clash between Kumasi Asante Kotoko and Accra Hearts of Oak from the Baba Yara Sports Stadium on GHANAsoccernet.com

Hello good morning and welcome to the LIVE coverageof the titanic clash between Kumasi Asante Kotoko and Accra Hearts of Oak at the Baba Yara Sports Stadium.

This is the week ten clash of the Ghana Premier League and already, other matches have been played on Friday and Saturday .

The shocking news, however, is how Dreams FC got mauled at the Sogakope Park, losing 5-0 to WAFA on Saturday .

In other results, Liberty Professionals drew 1-1 at home with Wa All Stars, Medeama SC left it late to beat AshGokd 2-1 while Inter Allies FC handed Ebusua Dwarfs a 2-0 defeat.

03'- Prince Acquah brought down. Temporary hold up. He's eventually been stretched off

8'- Gyamfi with a quick run on the flank but loses the ball to the line. Throw-in for Hearts.

20'- Delicious kick from Ben Mensah but Obeng fails again to pick the ball.

22'- Joseph Esso wins a corner kick for Hearts but Razak's kick has been headed out. Quick counter for Kotoko but Darkwah's shot blocked by Agyare.

24'- Crunchy tackle from Alhassan Aminu and Kotoko win a foul.

25'- Temporary hold up as Daniel Darkwah suffers a tackle.

28'- Great attack from Hearts but Annan comes out quick.

29'- Kotoko turn on the heat on Hearts but Gyamfi fails to connect from a beautiful pass from Songne Yacouba.

32'- Joseph Esso blasts but it misses the post by inches.

33'- Cobbinah with a beautiful dribble there, tries to find Esso who has been brought down but referee says play on.

36 - Songne Yacouba weaves his way through the Hearts defenders. Agyare brings him down but referee goes for a free kick instead of penalty.

37'- Yacouba takes a sumptuous free kick but Ben Mensah stretches to parry the ball away. Corner for Kotoko.

40'- We're five minutes away from the break and it's Hearts pushing for the opener now.

41'- Kotoko turning the heat on Hearts now. Douglas pushing his way through, brought down by Addo but referee says goal kick

44'- Free kick for Hearts as Amos Frimpong brings down Patrick Razak. Cobbinah with a back heel, Agyare unleashes a thunderous shot but it deflects. Corner kick for Hearts.

56'-Beautiful bicycle kick from Patrick Razak but an equally good save from Felix Annan.

61'- Yacouba fails on the rebound from Mensah after saving Gyamfi's corner kick.

64'- GOAL!!! - Patrick Razak blasts Hearts of Oak in front. Beautiful pass from Cobbinah and an excellent finish from Razak.

70'- KOTOKO SUB -Obed Owusu in for Emmanuel Gyamfi out

82'- Hearts on the break, Cobbinah sends an awesome pass to Fatawu. Fatawu sends a brilliant pass to Esso but he fails to connect.