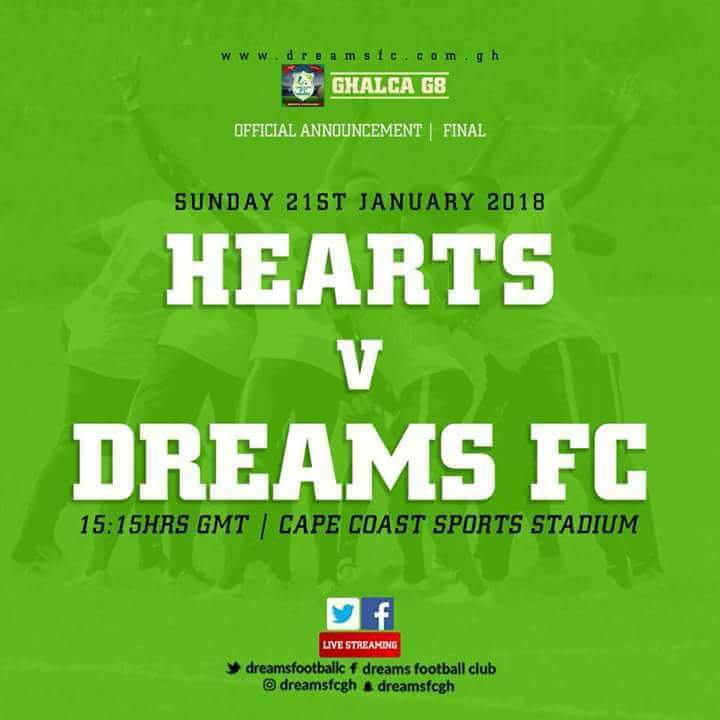 Re-live the LIVE play-by-play of the final clash of the 2018 GHALCA G8 Tournament between Accra Hearts of Oak and Dreams FC on Ghanasoccernet.com

Hello good afternoon and welcome to the coverage of the final clash of the 2018 GHALCA G8 Tournament between Accra Hearts of Oak and Dreams FC at the Cape Coast Sports Stadium.

Accra Hearts of Oak and Dreams FC are meeting for the first time in history, in a final clash of a tournament.

Hearts of Oak started the competition with a 1-0 win over Karela FC, lost 2-0 to Medeama SC before recording a 3-2 win over Ebusua Dwarfs to seal a qualification to the semi finals of the competition. The Phobians picked a ticket to the final after beating bitterest rivals Asante Kotoko 4-2 on penalties after a 0-0 stalemate.

Dreams FC, after a poor start to the competition, in a 1-0 loss to Aduana Stars , won 1-0 against Asante Kotoko and a recorded a similar scoreline against Techiman Eleven Wonders in the group stage before beating Medeama SC on penalties to set a date with Hearts in today's final clash.

A quick look at the line ups for both sides: 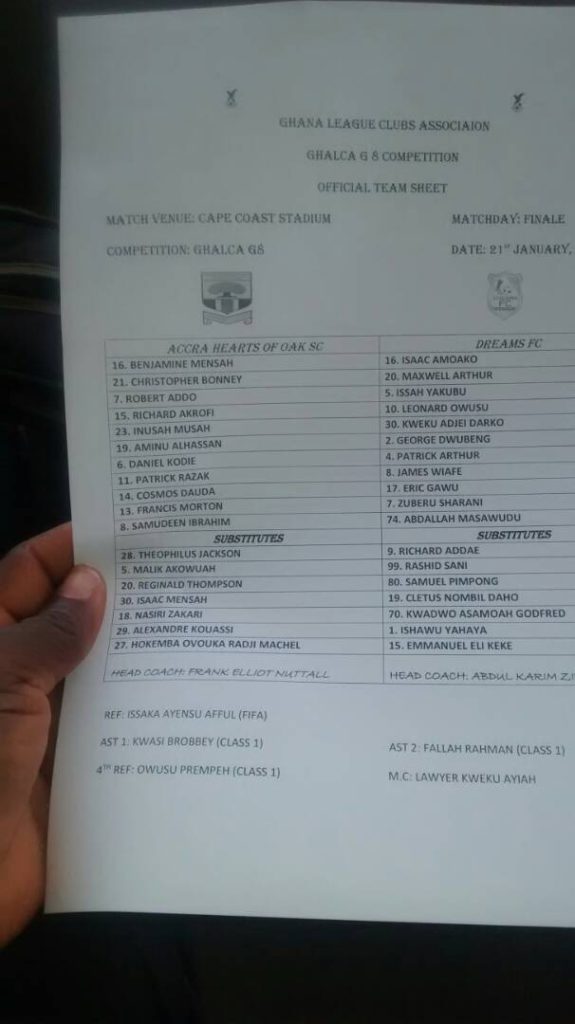 03'- Dreams FC looking promising from the start but the Phobians look calm.

05'- Samudeen with a brilliant pass to Razak but he fails to control.

10'- GOAL!!! Daniel Kordie with a thunderous strike for Hearts of Oak. Beautiful pass from Samudeen,  Brough but by More,  finds Akrofi who locates Kordie, ... and BAM! Hearts 1-0 Dreams FC

28'- Dreams FC in control. Gawu releases a powerful drive but ball goes over the bar.

30'- Foul for Hearts. Bonney behind the ball around the center circle. S3nd a long onein buy headed away.

32'- Dreams have a free kick around the center circle. Taken but Eric Gawu pushes his marker down for an infringement against Dreams.

34'- Dreams FC keeping possession, a long one to Gawu but it's been headed away. Hearts attacking now.

35'- Hearts attack breaks down. Dreams exerting pressure on the Phobians.

43'- Hearts forced out of their shells now. Initiate an attack but Kordie' pass fails to read lah Dauda.  Dreams FC on the break.

47'- Brilliant exchanges in the opening minutes of the second half

50'- Free kick for Hearts. Bonney behind the ball. Scuffle in the Dreams FC 18-box.

51'- Bonney with an excellent kick but Amoako pushes it over the line.  Orner for Hearts.

55'- Leonard with a fantastic volley but Ben Mensahakes an nice save.

56'- Great interception from Inusah Musah who clears a brilliant cross from Sharani.

57'- Hearts gradually coming under the bullet.

58'- It's the turn of Hearts now. Dauda finds Morten who sends a long one in but Daniel Kordie is unlucky this time.

61'- PENALTY! Ben Mensah whacks Eric Gawu who tears away from the Hearts defence beautifullyand Referee Isaka Afful couldn't have missed it. A chance for Dreams FC to take the lead.

80'- Game halts. Eric Gawu is down from an elbow from Inusah Musah. Inusah Musah is lucky he's not penal

86'- Brilliant save from Isaac Amoako from an equally brilliant t cross from Isaccharine Mensah.

90+3'- Free kick for Hearts as Sharani a high boot on Morton.

FT: Hearts of Oak 1-2 Dreams FC: Hearts of Oak broke the virginity of the game through Daniel Kordie under 10 minutes but Abdul Razak Cromwell restored parity for Dreams FC eight minutes later. Captain Leonard Owusu blasted the winner for Dreams FC from the spot after Eric Gawu was brought down by goalkeeper Ben Mensah. Dreams FC have an amazing story to tell. Just like Spain in the 2010 World Cup, Dreams FC lost their first game of the competition but here they are, winner of the tourney.

See you next time.