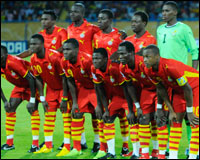 Nigeriaâ€™s under 23 team produced a spirited second half fight back to defeat Ghana 3-1 in a first leg second round 2011 All Africa Games qualifier at the Samuel Ogbemudia Stadium, Benin on Saturday.

Having outclassed the Vijana Stars of Tanzania at the same venue six days earlier in an Olympic qualifying contest, hopes were high among the home faithful that Augustine Eguavoenâ€™s lads would deliver yet again.

The fans were however left gasping early on as the young Ghanaians dominated with attractive passing and speedy offensive play.

Nigeria had CF Pontevedra of Spain shot stopper, Dele Ajiboye to thank as his smart save denied Dominic Adiyia from point blank range in the 15th minute.

Ghana continued to boss possession but goal scoring chances were at a premium as Nigeria defended doggedly.

The Nigerians almost pinched an undeserved lead against the run of play, five minutes later but Nosa Igiebor managed to drag his effort wide from six yards after a majestic through ball by Odion Oghalo put him through.

That chance turned out to be the shot in the arm the Dream team V needed as they slowly began to dictate the pace of the game with Igiebor excelling in the playmaking role.

Remarkably, Ghana scored the opening goal of a now feisty contest, a minute before half time; the Nigerian defence failing to clear a corner, as the boys in yellow took a 1-0 advantage in to the break through Udinese midfielder Rabiu Mohammed.

The Nigerians were always going to respond in the second half and they did so with deadly efficiency.

Ten minutes into the second half, Nigeria were back on level terms as the impressive Igiebor led from the front with a truly great goal.

The pressure from Nigeria continued in relentless fashion and AC Milanâ€™s Nnamdi Oduamadi was fouled in the Ghana penalty area as he was poised to score.

Igiebor stepped up confidently and dispatched the spot kick with frightening force to complete his brace on 62 minutes.

The Samuel Ogbemudia Stadium was shaking with emotion as the fans, smelling blood, urged the lads to hone in for the kill.

The young Nigerian stars obliged and claimed a third goal in the 76th minute through an unlikely source; defender, Ibok Edet, overlapping spectacularly to add his contribution in emphatic fashion.

Ehiosun, full of running and endeavour all afternoon, failed to add more gloss on an already impressive looking score line as his mazy run, late on failed to bear fruit.

â€œWe started slowly but later found our bearing as the half progressed. It was really disheartening that they (Ghana) scored at the time they did but we reacted brilliantly in the second half," Nigeria coach Augustine Eguavon said.

"It is a pity that we did not convert all the chances we had in the second half.â€

The second leg comes up in a forth night in Accra and Eguavoen is keen to see his boys exploit their first leg advantage. â€œItâ€™s unfortunate that they scored but nothing stops us from scoring over there,â€ he said.