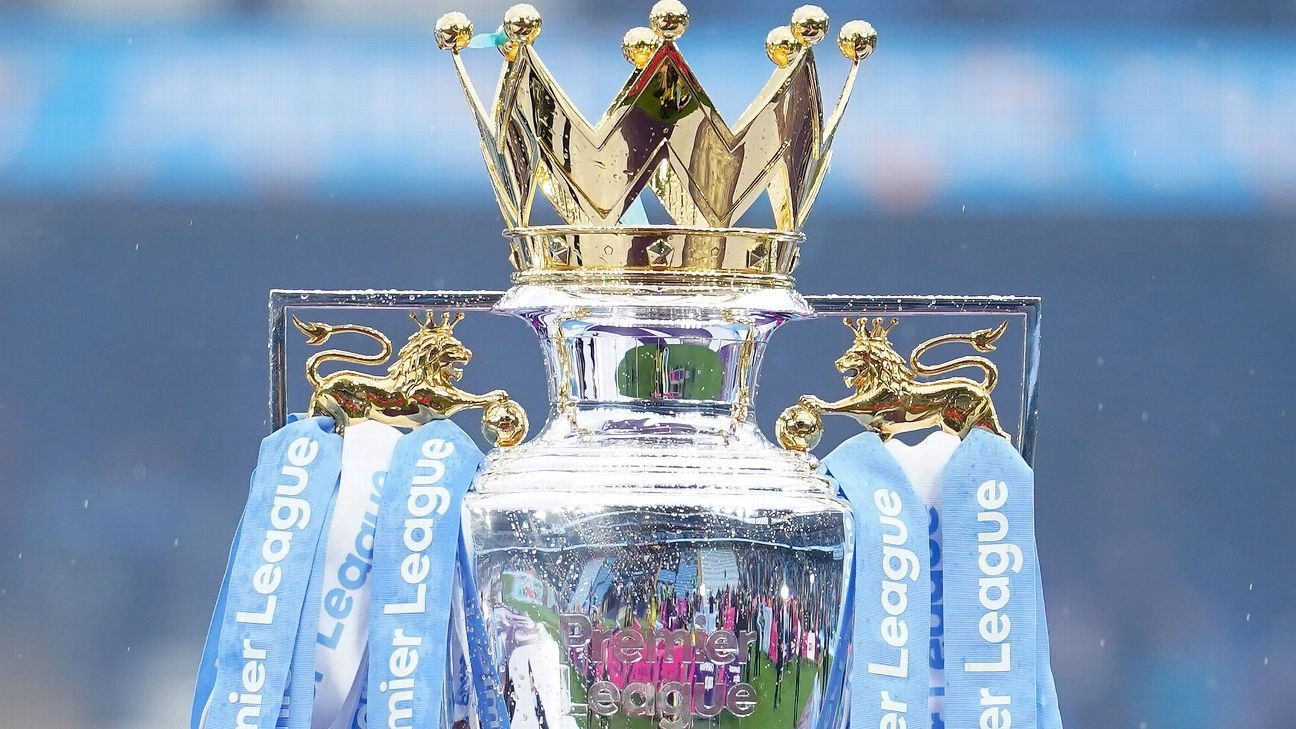 Welcome to ESPN's LIVE coverage of the final day of the 2021-22 Premier League season! Will Manchester City or Liverpool win the title? Who will reach the Champions League by finishing in the top four -- Tottenham Hotspur or Arsenal? Where will Manchester United end up? And will Burnley or Leeds United be relegated?

Man City have a 79% chance to beat Aston Villa, while Liverpool have a 83% to beat Wolves.

Anfield today. Either title number 20, a domestic treble and 3/4 of the way to the Quadruple or the end of an improbable dream. But what will it be...? pic.twitter.com/5tjsWkTmQc

There is still plenty left to play for as we enter the final 90 minutes of the campaign, not least the title itself as both Manchester City and Liverpool still have the potential to end the day with their hands on the trophy.

The fate of the championship is very much in City's hands, who have a one-point lead over rivals Liverpool in second place heading into the 38th and final round of matches. Put simply, a win at the Etihad will be enough for Pep Guardiola's side, but failure to do so would open the way for Klopp's team to take the title and keep their hopes of an unprecedented quadruple alive.

Along with the title there are teams battling for places in three European competitions -- Champions League, Europa League and Conference League -- as well as two clubs scrambling to avoid finishing in the last relegation place.

There are also several orders of individual merit -- such as the league's top goal scorer -- on the line as all 20 top-flight teams involved prepared to tussle it out one last time this season.

Before the matches kick off, let's take a closer look at the main things to look out for:

This is the ninth time a Premier League title race has gone down to the final round of matches, though no team at the top has ever surrendered their advantage -- no matter how narrow -- after starting the day at the summit.

Reigning champions City play host to Aston Villa after starting the day on top of the table with 90 points. Liverpool, one point behind, take on Wolves at Anfield knowing that they still have a chance of leapfrogging their rivals should results go their way.

A win for City would be enough to see them crowned champions for the fourth time in five years, but the Reds maintained their quadruple quest with a 2-1 comeback win over Southampton in their penultimate game on Tuesday. This ensured that City can still be pipped to the trophy should they fail to win and Liverpool secure victory on the final day. If City lose and Liverpool draw, it then goes down to goal difference, but it would require City to lose by seven goals for Liverpool to finish top.

Should Jurgen Klopp's side claim a second title in three seasons, it would be despite having only topped the Premier League table for one week over the course of the entire season, following a 3-3 draw against Brentford in late September.

Oddly, there is a scenario that would see an unprecedented playoff game between City and Liverpool required to settle the title, but that would involve the former losing 6-0 against Villa at home while the latter drew 5-5 against Wolves. Improbable, yes, but not impossible.

Below the title chasers, the race for fourth place will also go down to the wire as local adversaries Tottenham and Arsenal vie to join City, Liverpool and Chelsea in the Champions League next season.

Chelsea sealed their qualification earlier in the week without kicking a ball as Arsenal's 2-0 defeat to Newcastle United on Monday was enough to ensure the Blues a top-four finish. Furthermore, Thomas Tuchel's side are three points and plus-18 goals clear of Spurs, so they have third place virtually tied up as they prepare to face relegated Watford in their final fixture.

Fourth-placed Spurs carry a two-point lead over Arsenal, but thanks to a vastly superior goal difference (plus-15 better, in fact), they effectively require just a point against bottom-of-the-table Norwich to book their return to Europe's top club competition.

Arsenal can still overtake their neighbours, but that requires beating Everton and hoping that Spurs come royally unstuck against the relegated Canaries at Carrow Road.

The Gunners could also pip Spurs to fourth place if the latter only muster a draw against Norwich, but it would mean that Mikel Arteta's team would need to beat Everton by 16 goals or more to do so. Again, hugely improbable but not impossible.

Whoever loses out in the top-four battle will finish fifth, taking one of the two Europa League places available. The other will be taken by either Manchester United or West Ham.

United -- who are already guaranteed to record their lowest points total of the Premier League era -- will guarantee finishing sixth and a place in the Europa League if they win at Crystal Palace. Should they draw, then West Ham will return to the competition in which they reached this season's semifinals if they can win at Brighton.

Whichever one of these two teams finishes seventh will go into next season's Europa Conference League.

They left it ridiculously late, but Everton preserved their precious top-flight status for a 69th consecutive year with a remarkable 3-2 comeback victory over Crystal Palace on Thursday. Defeat would have sucked the Toffees into a three-way fight on the final day, but as such the relegation scrap is a straight winner-stays-up duel between Burnley and Leeds.

The Clarets leapt up and out of the relegation zone with a 1-1 draw against Villa on Thursday that saw Leeds tumble below the dotted line of doom on goal difference. Jesse Marsch's side are now level with Burnley on 35 points but are 20 goals worse off. They travel to face Brentford on the final day knowing that, realistically, a failure to better the Clarets' result against Newcastle will see them jettisoned back down to the Championship.

Mohamed Salah is currently leading the way in the hunt for the 2021-22 Premier League Golden Boot having scored 22 league goals for Liverpool this season.

A groin injury saw him miss the chance to add to his tally after missing the Reds' penultimate game against Southampton, but he can bolster his stats by finding the net against Wolves in the last outing of the campaign. However, Klopp has already said he will not gamble on the forward's fitness with the Champions League final against Real Madrid in six days' time.

Son Heung-Min of Tottenham is Salah's closest challenger, with the South Korean having amassed 21 goals in league competition this season.

Manchester United star Cristiano Ronaldo also has an outside chance of claiming the Golden Boot after scoring 18 league goals in his comeback year at Old Trafford, but he will need to score a hatful against Palace in his final game to top the ranking. Harry Kane is next on the list (16 goals) but Son's striker partner at Spurs would require an even greater feat of individual marksmanship against Norwich if he were to retain to trophy.

Salah has already won the Golden Boot twice before (2017-18 and 2018-19) but shared it on both occasions. He will therefore no doubt be keen to claim the award for himself this time around.

PLAYMAKER OF THE SEASON

Salah could become the second player in as many seasons to win both the Premier League Golden Boot and the Playmaker of the Season awards after Harry Kane (23 goals and 14 assists) completed the clean sweep in 2020-21.

This year Liverpool, as ever, dominate the assist rankings with Salah top (13 assists) closely followed by teammates Trent Alexander-Arnold (12) and Andy Robertson, who is joint-third on the list alongside Jarrod Bowen and Mason Mount with 10 assists apiece heading into the final day.

City and Liverpool will also go head-to-head in the race for the Golden Glove award, with fellow Brazilians Ederson and Alisson level-pegging on 20 clean sheets each heading into their final matches.

While the destiny of the Premier League title is the more pressing concern for both, one more shutout for either goalkeeper would be enough to claim at least a share of the 2021-22 award.