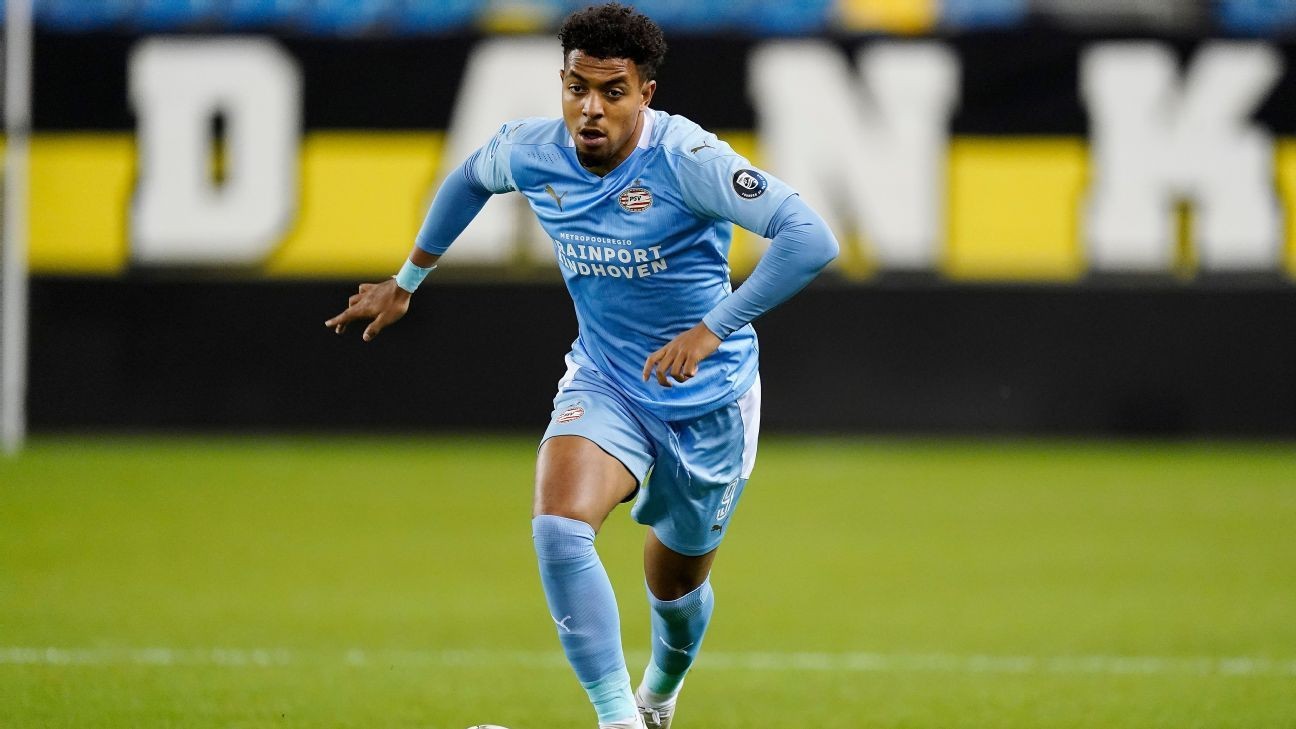 Despite Ronald Koeman stating a few weeks ago that Barcelona would attempt to sign Memphis Depay in January, Mundo Deportivo believes the Barca boss is plotting a plan B, namely PSV Eindhoven's Donyell Malen.

Barca were unable to close a deal to sign Depay from Lyon in the summer and it might prove just as tricky in January, which is why Koeman could be considering the fall-back option of Malen, a 21-year-old who has scored five goals already this season.

Malen has also registered two assists too, and despite his tender age he has also been playing for the Netherlands national team. In fact, Koeman worked directly with Malen while coaching his country, and so he knows first-hand the potential the youngster has in front of goal.

Koeman is hoping he can strengthen his Barca squad in January, though he knows he will have limited funds to work with.

09.12 GMT: David Alaba and Bayern Munich could part ways at the end of the season, according to German outlet Sport Bild.

Alaba's representative Pini Zahavi and the Champions League winners returned to the negotiation table last Friday, but they left without getting any closer to agreeing terms over a new contract.

The Austria defender is under contract at Bayern until 2021, and he could now leave the club where he has spent his entire professional career.

Alaba, 28, could leave the Allianz Arena on a free transfer next summer and can sign a pre-contract for the 2021-22 season with a new club from Jan. 1.

08.35 GMT: Barcelona president Josep Maria Bartomeu resigned along with the rest of the board of directors on Tuesday, rather than await a fans' vote of confidence on his future at the club, raising the prospect that Lionel Messi could stay at the club beyond the end of the season.

Last season was Barca's first campaign without a trophy since 2007-08, and earlier this month the club announced losses for the 2019-20 season of €97m, although it was largely a consequence of the financial strains relating to the coronavirus pandemic. Cracks emerged between Bartomeu and the players, particularly Messi.

Bartomeu stood firm when Messi wanted to leave Barca this past summer, with the forward accusing him of lying and then criticising Bartomeu's running of the club when he announced that he would stay rather than pursue legal action to force a move away from Camp Nou.

"The easiest thing after the Champions [League defeat to Bayern Munich] was to resign, but one had to take decisions amid an unprecedented global crisis," Bartomeu said, adding that later on, in the wake of the Messi spat, he could not let the club be run by external, temporary figures. "Who would have ensured that Messi stayed? Who would have hired a new coach?"

Messi's contract expires next summer, meaning he is free to talk to clubs outside of Spain over a free transfer from Jan. 1, 2021.

08.00 GMT: Ole Gunnar Solskjaer has hit back at claims Manchester United made a mistake in signing midfielder Donny van de Beek and insisted he will play a key role at Old Trafford this season.

Van de Beek, a £40m summer signing from Ajax, was an unused substitute for the 0-0 draw with Chelsea on Saturday, prompting Patrice Evra to say his former club "don't need him," while former Netherlands forward Marco van Basten said the player should have joined a club where he can play more regularly.

Van de Beek has not started a Premier League game so far this season, managing just 61 minutes in five games, but Solskjaer is backing the 23-year-old to come good.

"I realise the topic is Donny van de Beek and it's nice for some players or commentators to have a little go," Solskjaer told a news conference on Tuesday. "I know you're short for time when you're on telly and you have to put your points across very quickly but you have to know that you don't have to start the first three games to be a very important player in the squad.

"When Donny has played, he's played really well. I think it says a lot about our depth of quality in the squad that we don't have to use him every single game because we have other players as well. I also think it says everything about our ambitions -- we want to push on, we want to challenge for trophies this season. Donny is going to play a big, big part this year. Donny's going to be very very important for us, don't worry about that."

Tariq Lamptey has been in electric form since joining Brighton & Hove Albion from Chelsea in January, alerting interest from Bayern Munich. Yet the Sun reports that the Seagulls are attempting to keep the German giants at bay by offering the defender a huge new contract.

The England U21 star has been arguably Brighton's most consistent player and as well as interest from Bayern. Spanish side Sevilla FC were also rumoured to be interested in acquiring the youngster's services.

Brighton are keen to keep their star man and to that end have started negotiations on £140,000-a-week contract which would extend his current deal, which still has three years to run.

Lamptey has provided two assists in 14 games for Brighton since his switch earlier this year.

Having conducted two swap deals already this year, Barcelona and Juventus could do more business in January 2020, with the Old Lady willing to swap Federico Bernardeschi for Ousmane Dembele.

That's according to Tuttosport, which reports that while the two clubs are preparing to do battle on the pitch on Wednesday night, they could be also preparing to negotiate in the boardroom.

Bernardeschi and Dembele are both coming to end of their respective contracts in 2022. Juve could also be willing to swap Alex Sandro for Junior Firpo, as the two clubs look to freshen up their squads without breaking the bank.

The two European giants have developed a good relationship in 2020, and that could be set to continue if they can continue to do business that benefits both parties.

- El Chiringuito is reporting that Lyon could offer Antoine Griezmann an escape route out of Barcelona and sign the French striker in a swap that would see the aforementioned Depay move the other way. Barcelona are keen to conclude the signing of Depay, and Griezmann has failed to impress since joining the Catalan club from Atletico Madrid.

- The future of Lautaro Martinez appears to be in .... Milan. Tuesday's issue of Tuttosport is suggesting that Internazionale club chiefs are planning on extending the forward's contract. While the Italians seemed willing to let the striker go for a huge fee and several Barca players in the summer, the outbreak of COVID-19 appeared to impact everyone involved in the deal. And now it would appear as though Martinez is set to stay at the San Siro.