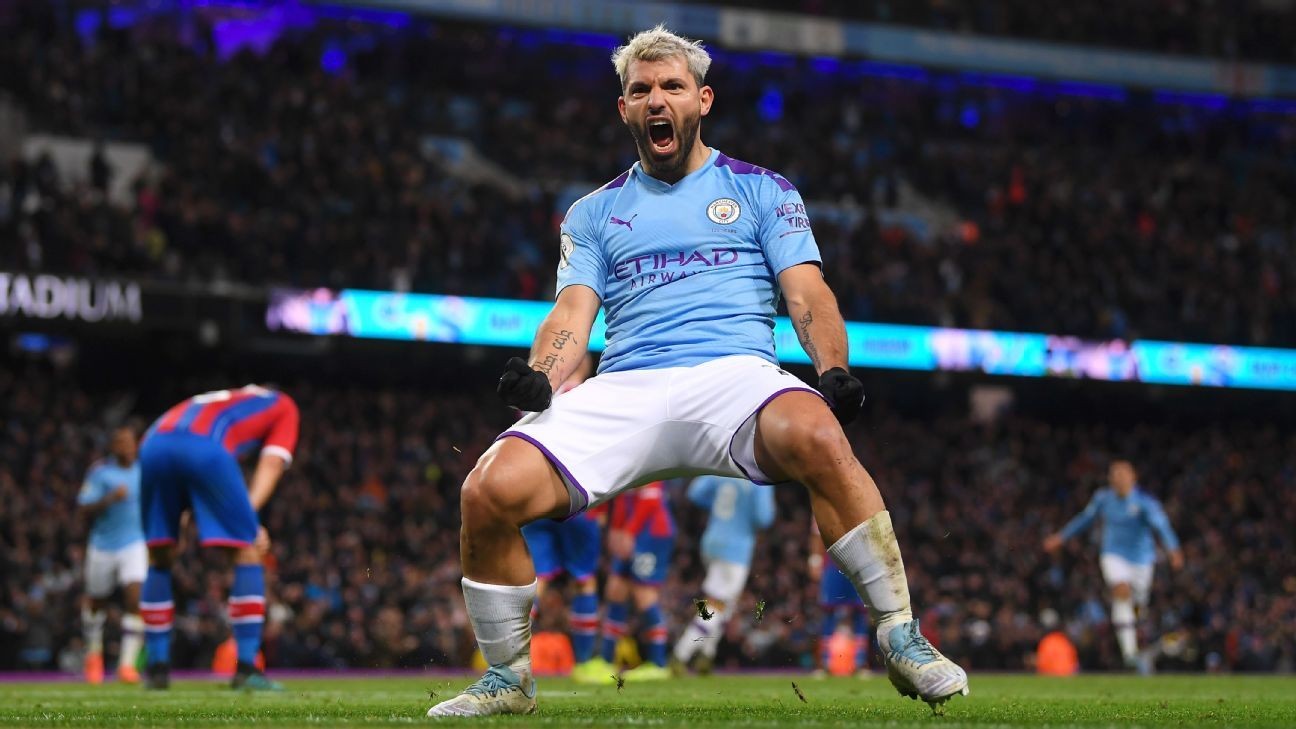 Manchester City striker Sergio Aguero is on the radar of Barcelona when he becomes a free agent next summer, according to The Sun.

Aguero, 32, is in the last six months of his contract at City and is yet to agree a new deal, which means he is free to talk to clubs outside of England.

Though his season has been ravaged by injury, he is still one of the best strikers around, and Barcelona may be looking for a short-term replacement for Lionel Messi if the Argentina international follows through on his threat to leave Camp Nou when his own contract expires in 2021.

Aguero's £240k-a-week wages could be a stumbling block, while PSG have also shown interest. The striker has always said he wants to return to Argentine club Independiente to end his career but he may have a few years left at the top in Europe yet.

Diaz, 21, joined the Rossoneri on a season-long loan from Real Madrid in the summer and has scored four goals and set up three more in 22 appearances in all competitions since.

Having managed only 21 appearances, six as a starter, for Real Madrid since signing for the club from Manchester City in January 2019 for a fee of over £15m, Diaz is reportedly open to continue at Milan beyond this summer.

Los Blancos have no intention of letting Diaz leave permanently, but are open to extending his loan stay at the San Siro for a further season.

09.09 GMT: Luka Jovic's loan move from Real Madrid to Eintracht Frankfurt is set to be made official today.

Eintracht Frankfurt sporting director Fredi Bobic has confirmed that his club is on the verge of signing Jovic on loan for the remainder of the season.

"Luka Jovic is on the verge of joining our club until the summer," Bobic said. "There are still a few details to be sorted out, including the medical. But if all goes well, he will soon be with us."

The Serbia international will return to the Bundesliga club on a six-month loan with no purchase option included in the deal. Jovic, who signed a six-year contract with Madrid after moving to the Spanish giants on a reported €60m deal in the summer of 2019, has had limited playing time with Los Blancos.

The 23-year-old has scored two goals in five appearances in all competitions for Madrid this season. He has not travelled with the team to Malaga for Thursday's Spanish Supercopa semi-final against Athletic Bilbao, having previously missed Madrid's goalless draw at Osasuna on Saturday.

Jovic impressed at Eintracht scoring 27 goals during the 2018-19 campaign that led to Madrid acquiring him that summer.

08.30 GMT: The Bundesliga's English contingent could increase this summer, with Bayern Munich linked with a move for Reading defender Omar Richards. The 22-year-old is out of contract in the summer and, according to the Guardian, he will agree three-year deal with the German and European champions. The former England Under-21 international will provide competition for first-choice left-back Alphonso Davies. Ex-Chelsea midfielder Jamal Musiala is also at Bayern.

Kasey Keller questions if Bayern's defence is suited to playing a high line after giving up 24 goals in 15 games.

The youngster did sign a new contract that is set to keep him at Stamford Bridge until 2024, but the report indicates Bayern haven't been thrown off the scent and are monitoring how much game time he's getting under Frank Lampard this season.

Last summer Chelsea rejected a loan offer-plus-£70 million purchase option from the German champions, which provides an idea of how much Bayern will have to pay to secure his signature.

The Guardian is reporting that Arsenal are hoping to make an offer for Shakhtar Donetsk's Manor Solomon this summer.

The Gunners have already made a few moves during the January transfer window with the belief being that manager Mikel Arteta will be making wholesale changes over the course of the next few windows.

After a handful of strong performances in the UEFA Champions League, Solomon has emerged as one of the main men that Arsenal are monitoring.

Wolverhampton Wanderers are no longer looking into deals for Divock Origi or Olivier Giroud, the Daily Mirror reports.

Following Raul Jimenez's fractured skull injury it seemed as if Nuno Espirito Santo was going to be dipping into the transfer market for a new striker, but after recalling Patrick Cutrone from Fiorentina, that no longer appears to be the case.

Nuno was said to be on the hunt for Chelsea's Giroud or Liverpool's Origi, but instead, he's been told to utilise the resources he has at his disposal as Wolves' small squad continues to struggle.

- The Daily Mail is reporting that Arsenal and Chelsea are two of the clubs considering a move for Bursaspor sensation Ali Akman. The 18-year-old already has nine goals in 16 appearances over in Turkey this season, and while Galatasaray and FC Salzburg attempted to put forward a bid in December, their inability to sign him has opened the door for Europe's elite to test the waters.

- Celtic have joined Rangers in the race to sign Wigan Athletic starlet Kyle Joseph, the Daily Mirror reports. With the Latics being in a difficult financial position it's starting to seem as if their top players could end up leaving sooner rather than later, with Joseph being available for the likes of the two Scottish sides in a pre-contract deal this summer. Tottenham Hotspur are also interested in the player.