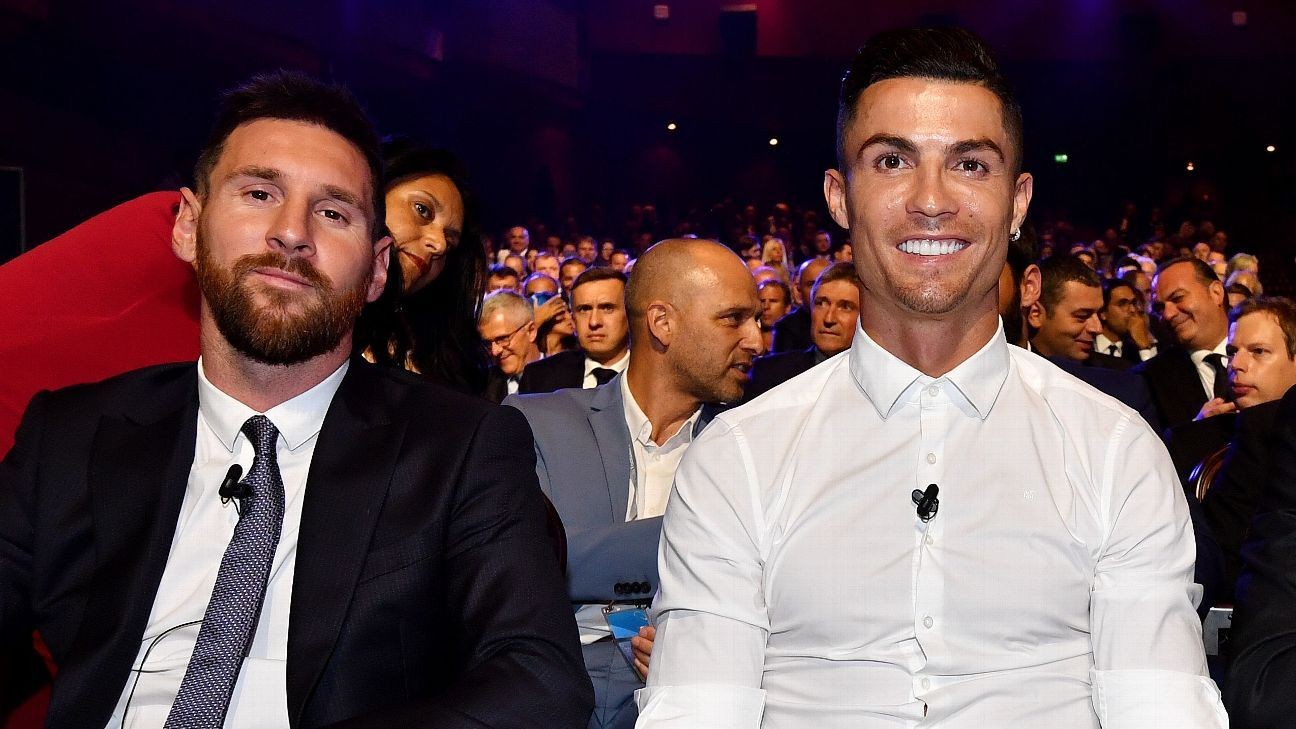 Can you imagine Cristiano Ronaldo and Lionel Messi playing together at Barcelona? No, us neither. But that's the latest from Spanish football expert Guillem Balague.

There has been plenty of speculation over whether Messi will extend his contract at Camp Nou beyond 2021, but some interesting gossip is that Juventus are looking to move Ronaldo's €23m-a-year off the wage bill and are offering him around. Including to Barcelona.

Ronaldo considered leaving Juventus for PSG this summer before the coronavirus pandemic forced football into shutting down, according to France Football, having grown disillusioned with life in Turin. But could he now move somewhere much more controversial?

"The reason why Cristiano Ronaldo has been linked to PSG is not so much that PSG are thinking of getting him, it is because Jorge Mendes has been given instructions to find a team for Ronaldo," Balague told BBC Radio 5 Live. "We've seen this in the last six months, he was linked to Real Madrid.

"They said no chance, he's not coming back. And there's been talks about the MLS because Juventus want to get rid of that wage. It is as drastic as that. He's been offered everywhere, including Barcelona."

The sight of a 35-year-old Ronaldo teaming up with long-time rival Messi just for one season would be incredible, but it's highly unlikely that the Real Madrid legend would do that to his former club. Or that financially-stricken Barcelona would be able to afford his wages. But we can dream, right?

08.59 BST: Midfielder Blaise Matuidi will leave Juventus after three seasons following the mutual termination of his contract, the Serie A champions said on Wednesday.

Sources told ESPN's Julien Laurens earlier this week that David Beckham's Major League Soccer side Inter Miami are set to sign Matuidi, who made 45 appearances for Juventus across all competitions last season as they claimed the league title for a ninth season in a row.

Matuidi, who arrived in Turin from French side Paris Saint-Germain in 2017, won three Serie A titles with Juventus. Capped 84 times by France, the 33-year-old was part of the 2018 World Cup squad which defeated Croatia 4-2 in the final.

Sources told ESPN that Matuidi has taken a pay cut to secure the move to MLS where he will be reunited with Beckham, after the pair played together for Paris Saint-Germain back in 2013, just before the Englishman retired. Matuidi has spoken to Beckham over the phone as well as with Inter Miami manager Diego Alonso, sources said.

08.27 BST: Isco won't be leaving Real Madrid this summer even as the club look to refresh their midfield line-up, Diario AS reports.

The return of Martin Odegaard to the Bernabeu -- and claims that Dani Ceballos will also find a place in the squad -- have led to speculation about the playmaker's future.

According to AS, Isco has told his father and agent not to listen to any offers this summer.

"He's used to competing with four or five teammates for his place and he's always ended up playing" a source close to the player told the newspaper.

The 28-year-old -- who stayed on the bench as Real Madrid were knocked out of the Champions League by Manchester City -- has a contract at the club until 2022 and there have been no talks yet about a new deal.

08.00 BST: Paris Saint-Germain president Nasser Al-Khelaifi has said that both Neymar and Kylian Mbappe would stay in Paris next season and that "they will never leave these two."

The two superstars were instrumental in PSG's 2-1 comeback win over Atalanta in the Champions League that saw the French club reach the semifinals of the competition since 1994-95.

Both players are under contract until June 2022 and PSG will try to convince them to sign new deals in the fall and extend their stay in the French capital. Neymar has been a target for Barcelona for a year now while Mbappe is wanted by Real Madrid. However, according to Al-Khelaifi, neither of them will leave this summer.

"Mbappe and Neymar are amongst the best players in the world, maybe in the top-five or even top-three," Al-Khelaifi told French TV station RMC Sport. "Neymar was the man of the match, he had a great game. We have found Neymar in the last three months, he has changed a lot of things in the team. I felt something special."

That's according to The Mirror, which reported on Wednesday that United are likely to step up their efforts to prize Grealish away from Villa should their attempt to sign Jadon Sancho from Borussia Dortmund prove unsuccessful.

The Mirror's report also states that Aston Villa co-owner Nassef Sawiris has slapped a whopping £80m price tag on the club skipper. Grealish has three years left on his deal at Aston Villa, which is thought to be worth around £65,000-a-week, after helping his team survive a final-day relegation battle to stay up.

- Paul Pogba's commitment to Manchester United could finally be written in black and white (no Juventus pun intended), with Sky Sports reporting that the midfielder is expecting the club to open contract talks once their Europa League campaign ends. Pogba, who has a year remaining on his contract, was heavily linked to Real Madrid and Juventus last summer. But it would seem the 27-year-old now wants to commit his future to United. Sky's Dharmesh Sheth claims Pogba is content at United and expects contract talks to open soon.

- The arrival of Pierre-Emile Hojbjerg at Tottenham Hotspur means young midfielders Oliver Skipp and Jamie Bowden will be sent out on loan next season, claims Football Insider. Jose Mourinho has reportedly been inundated with requests from Championship and League One clubs about the availability of both Skipp and Bowden.

- Despite seeing bids of £18.5m, £22m and £30m for Brighton & Hove Albion defender Ben White rejected, Leeds United will reportedly make an improved offer to the Seagulls. Football Insider claims the Premier League newbies are desperate to tie fan favourite White down to a deal at Elland Road after he impressed on loan with the Yorkshire club during their Championship-winning campaign.