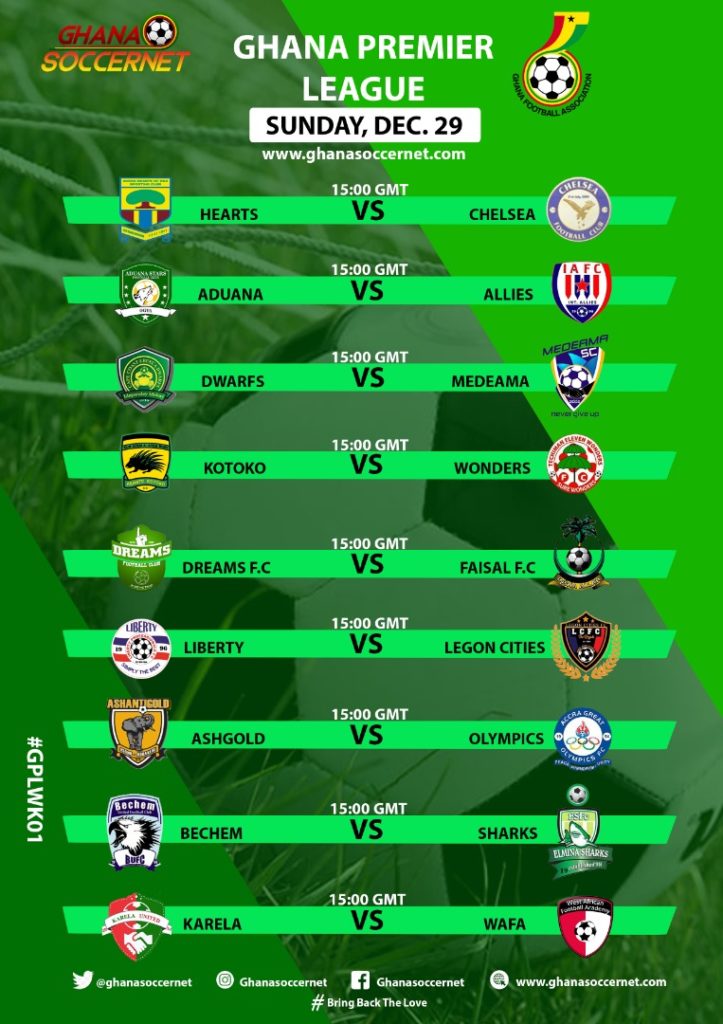 We will bring you updates from the all the league centers and text commentary in the game between Hearts vs Berekum Chelsea.

Asante Kotoko will hope for a perfect start to the 2019/20 Ghana Premier League season when they welcome Techiman Eleven Wonders to the Baba Yara Stadium in Kumasi.

The Porcupine Warriors are in the best mood for their opening game of the season after lifting the President's Cup last weekend.

They took the trophy at the expense of no other team than rivals Hearts of Oak. The win gives them confidence heading into the game against Wonders on Sunday.

Which means the fans will expect nothing short of victory.

Kotoko have seen changes in their technical set up ahead of the commencement of the league with the return of Maxwell Konadu as head coach.

Konadu’s presence on the bench has made Kotoko firm favourites to win the title. The former Black Stars assistant coach excelled in his first spell winning the league in 2012.

He comes into his second spell with experience garnered from working as Black Stars assistant coach and head coach of Local Black Stars. He won the WAFU Nations Cup and qualified Championship of African Nations.

For Wonders, not much has been seen during the offseason and not much is expected from them. They start the season without a substantive manager following the surprise resignation of Frimpong Manso.

He resigned after three weeks in charge of preparing the team for the start of the league.

Hearts of Oak vs Berekum Chelsea

Hearts of Oak will begin their quest for another Premier League title when they welcome 2010 champions Berekum Chelsea at the Accra Sports Stadium on Sunday.

The Rainbow club shocked football fans following the decision of the board to ask coach Kim Grant to step aside with just six days to the start of the season.

However, assistant gaffer Edward Nii Odoom has been tasked to take charge of the team as a permanent replacement is being sought after.

Meanwhile, the Blues will be led by French tactician Landuet Alain Andre in the 2019/20 Premier League season.

Four player will be making their Ghana Premier League debut for the Phobians including Academy products Michelle Sarpong and Manaf Umar. The pair impressed during the NC Special competition.

Larry Sumaila and Kofi Kordzi are the other two players, who could make their premier league debut against Chelsea.

Goalkeeper Dan Lad Ibrahim joins on loan from Asante Kotoko with the likes of Cephas Doku, Nasiru Osman and Kofi Sefah Biney also coming through during the offseason.

A lot will be expected from the Phobians, especially after their performance in the NC Special Competition but the Berekum Blues have always been a hard nut for the Rainbow club to crack.

To be tipped by pundits and connoisseurs as a contender for the league title comes with a lot of expectations as the season kicks off on the weekend.

AshantiGold SC will be at the comfort of the Len Clay stadium to welcome Great Olympics on Sunday with the aim of starting the 2019/2020 campaign on the perfect.

It was a real struggle for the Miners in the last premier league, that is the 2016/2017 season where they finished 12th position winning the last match to avoid relegation.

But the outstanding display in the Special Competition and the truncated league give the Gold and Black side positive vibes going into the new season.

Shafiu Mumuni, top scorer in the 2019 WAFU Cup of Nations for the Black Stars B will be main man to propel AshantiGold to greatness this season.

He will ably will be supported by the prospects of Amos Addai, Abdul Latif Anabila, James Akaminko, Richard Osei Agyemang and the Brazilian playmaker Marco Aurelio Silva Damasceno.

Assistant trainer Yakubu Sheriff Mambo will be dugout to steer affairs for AshantiGold since head coach Ricardo da Rocha is ineligible to lead the team.

Great Olympics are making a trip the Gold mining town of Obuasi in search for at least a point which will spur them on as the season goes by.

They have not won at the Len Clay stadium in the top-flight since 2006.

The last time the Wonder Boys visited AshantiGold SC in the league, it was the opener of the 2016/2017 campaign with the latter clinching a convincing 3-1 victory.

Great Olympics have made some big name acquisitions for the season with the return of striker Emmanuel Clottey who is a former goal king of the Ghana Premier League.

Clottey was also the top scorer of the CAF Champions League in 2012 when playing for Berekum Chelsea.

They also have in thier midst Godfred Saka who has won the championship two times with Aduana Stars.

Three days ago head coach Isaac Nii Armah resigned from his post but he has since been replaced by Prince Koffie.

There is a growing optimism for current title holders Aduana Stars ahead of the new season as they look to win the premiership for a third time.

In the 2016/2017 campaign where they won the league for the second time, the Fire Boys were the best performers at home by amassing the highest number of points and also going unbeaten.

They start at home this term as they host Inter Allies FC at the Nana Agyemang Badu park on Sunday.

The unconvincing form in the Special Competition seems to have waken the two-time champions to make some significant additions to their squad.

Aduana Stars have also signed youngsters Alfred Opoku, Benjamin Owusu and Flavio Kouassi Kongoza to give them a depth in squad.

They will also be depending on the experiences of Yahaya Mohammed, Paul Aidoo, Emmanuel Akuoko, Elvis Opoku, Caleb Amankwah, Hafiz Adams, Joseph Addo amongst others to be able to clinch the ultimate again in the end.

Inter Allies FC needed a last day 2-1 victory over Liberty Professionals to survive the relegation ship in their last league campaign in the 2016/2017 season.

They would want to avoid such scare by getting at least a point from Dormaa Ahenkro but that won't come easy.

Inter Allies' last journey to the Nana Agyemang Badu park was very terrifying as they were handed an embarrassment with Aduana Stars mauling them 6-0.

The "Eleven Is To One" side have been very busy in transfer window with the acquisitions of about six new players. Most them joined from the lower leagues.

Top marksman Victorien Adje Adebayor is the one to lead the capital based side to achieve their target this term.

Other games coming up

Kick off  underway at the various league centers