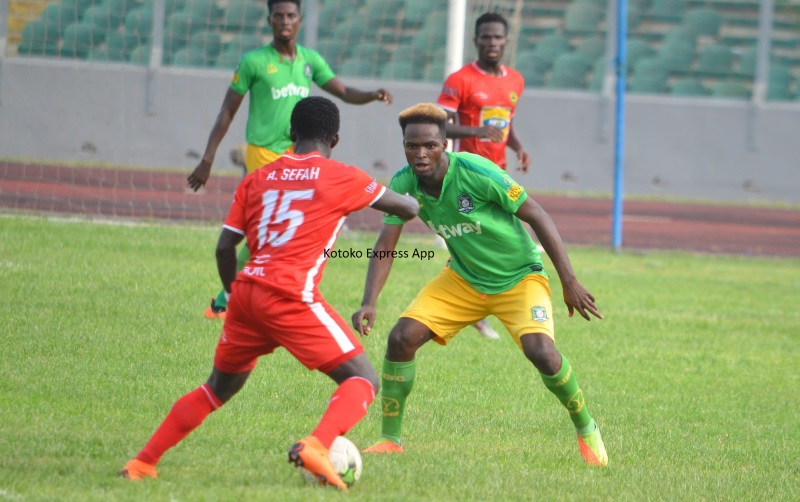 GHANAsoccernet.com brings to live updates in the game between Aduana Stars and Asante Kotoko in match day 11 of the 2019/20 Ghana Premier League.

Aduana Stars and Asante Kotoko will battle it out for three points in the biggest match of Ghana Premier League week 11 on Wednesday afternoon.

The match will be played at the Nana Agyemang Badu Park in Dormaa.

Aduana surrendered the first position after a shock 5-2 defeat to Liberty Professionals last weekend and they will be targeting a win against the Porcupine Warriors.

The only positive from the match in Dansoman is Yahaya Mohammed’s two goals. The striker, who has scored 10 goals, is expected to play a key role and help Aduana overcome Kotoko.

For Kotoko, they come into the game low on confidence though they moved to the second position. The reason being they have struggled to produce their best in their past three games.

In the three games, they have scored just one goal (an own goal) and have won five points. Last weekend, they played out a goalless stalemate with Ashanti Gold.

Their lack of cutting edge has been blamed on the absence of star striker Songne Yacouba. The Burkinabe has not made Kotoko's squad in the last four games as he continues to fight with management over a new contract.

It's unlikely that Maxwell Konadu will include him in the squad for the trip but they need his services.

Konadu will be hoping to have midfielder Justice Blay back after he missed the Ashanti Gold due to a knock.

This will be the 18th league meeting between the two sides. They have both won five each with seven ending in draws.

Kick off underway at the various league centers

We begin today’s live update from the 10th minute

42 mins played at the various centers

Aduana Stars awarded a free kick just some few meters to the goal area. The home side failed to make it count. Ball goes wide for a goal kick.

Second half underway At the Akoon Park

Second half underway at the Nana Agyeman Badu Park

Goal oooo Samuel Bio gets the winner for Aduana Stars with the last kick of the game.