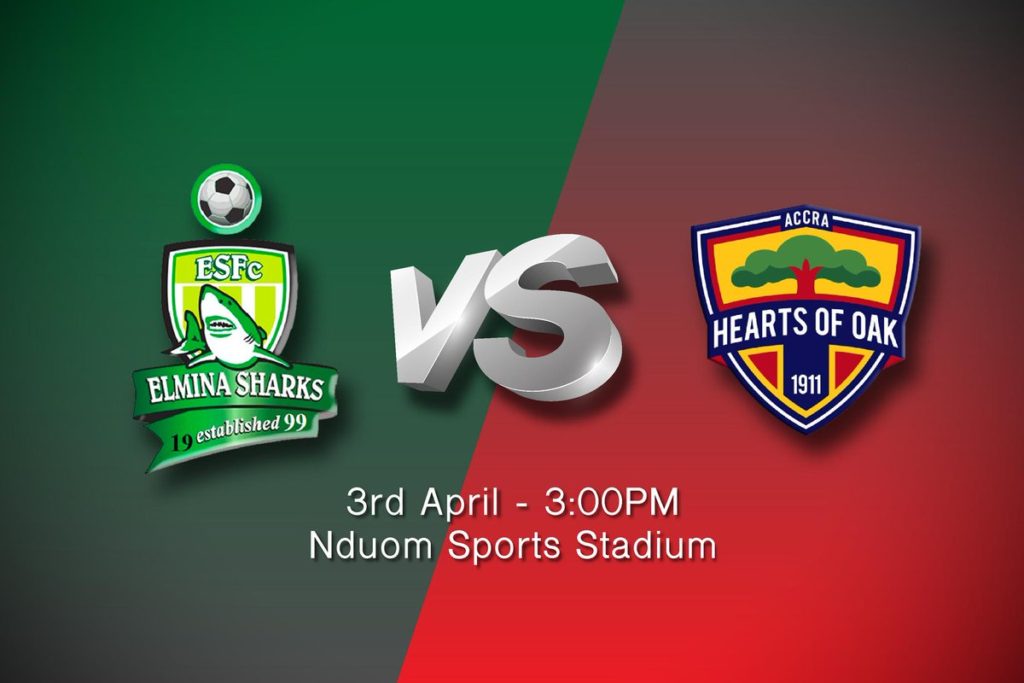 Follow the LIVE play-by-play of the match between Elmina Sharks and Hearts of Oak in match day two of the Special Competition on GHANAsoccernet.com

The Ghana Football Association Special Competition match day two  comes off today with some exciting fixtures coming up in the various zones.

Hearts of Oak will be looking to continue their winning run in this fixture as they play against Elmina Sharks at the Nduom Sports Stadium on Wednesday.

Matches to be played this afternoon across the various centers below:

Elmina Sharks vs Hearts of Oak

Below is the starting XI for both sides

Game begins in a few minutes...

02'- Both teams starting off slowly

06'- First throw in to Hearts of Oak.  Sharks dominating the game at this moment

A chance for Elmina Sharks what a poor cross by Tweneboah, it's a goal kick to Hearts

11'- Chance for Elmina Sharks, Felix Addo beats the goal keeper, net wide open to receive the ball. Oh no he fails to make it count. Goal kick to Hearts of Oak

12'- A dangerous cross from Obeng Junior into the box of Elmina Sharks, goalkeeper saves it.

14'- First corner kick of the game to Elmina Sharks. Ball effected but a good clearance by Hearts of Oak

18'- Goal scoring opportunity for Hearts, oh no he hits the ball wide. Hand ball and referee whostle in favor of Hearts. Ball quickly effected a chance for Hearts

20'- Another chance for Hearts of Oak, ball intercepted by the Elmina Sharks defence. Hearts dominating the game at this moment.

22'- The Phobians in control of the game at this moment as they push for the first goal. Corner kick to Elmina Sharks as Richmond Ayi fails to keep the ball in side the line.

23'- A chance for Hearts as Obeng Junior sends a diagonal pass to Fatawu Mohammed who tries to chip the ball over the goal keeper.

28'- Throw in to Hearts of Oak. A poor cross by Fatawu into the box. Throw in to Elmina Sharks

First  yellow card of the game to Richard Mpong

31'- Free kick to Hearts, ball effected in to the box but finds no one.

32'- Foul against Kofi Kordzi of Hearts of Oak

34'- A chance for Elmina Sharks goal kick to Hearts

38'- Nice back to Richmond Ayi who grabs it firmly

39'- Hearts on the attack but a poor pass from Alhassan cuts it short. Throw in to Sharks

41'- A header a cross the face of goal by Hearts. Goal kick to Sharks

Referee brings the first half to an end.

We will be back for the second half.

50'- Substitution for hearts of Oak Benjamin Agyare in, Mohammed Alhassan Out

56'- A chance for Obeng Junior but ball has been blocked. Corner kick to Hearts of Oak. Christopher Bonney curls it into the box, ball cleared, Agyare hits the rebound. Ball blocked and finally cleared from danger

57'- Referee whistles and is in favor of Elmina Sharks. Free kick

58'- Ball effected but has been headed out by Agyare

60'-  Goal keeper makes a beautiful save for Sharks

It's Elmina Sharks 0-0 Hearts of Oak

Christopher Bonney tricky move fails him as he losses the ball. Goal kick to Sharks

67'- Throw in to Elmina Sharks

68'- Substitution for Hearts of Oak

70'- Free kick in favor of Elmina Sharks. Ball effected but has been cleared by Benjamin Agyare

71'- Joseph Esso has been disposed off the ball. Sharks on the counter but referee whistles for offside

72'-  Corner kick to Hearts of Oak. Ball has been saved Richard Atta

73'- Offside against Benjamin Tweneboah of Sharks

75'- free kick to Fatawu but poorly executed by captain

79'- Sharks on the break, a chance but he fails to beat the goalkeeper and hits the ball wide

81'- Chance for Obeng Junior goes through four players and hits the ball wide.. What a miss from the Hearts of Oak striker

83'- Goal oooo for Elmina Sharks as Felix Addo slots in from a goal-mount scramble.

85'- Another opportunity for Sharks but referee whistles for Offside.

87'- Can this be the equalizer for Hearts of Oak, the strike goes way off target

Game comes to an end at the Nduom Sports Stadium