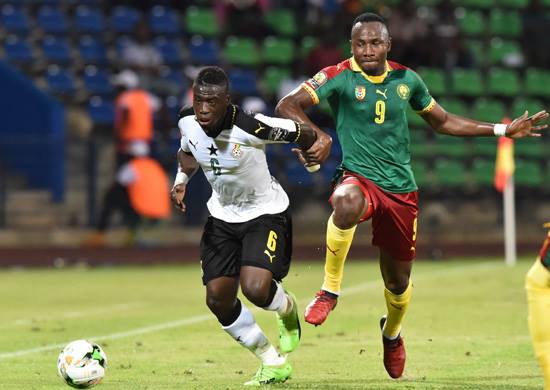 Follow the LIVE Play-by-Play between Ghana versus Cameroon in the 2019 Africa Cup of Nations second group game at the Ismailia Sports Stadium on GHANAsoccernet.com

The Black Stars of Ghana will be in search for their first win at the 2019 AFCON against the Indomitable Lions of Cameroon when both teams clash on June 29 at the Ismailia Sports Stadium in Group F.

Ghana has not beaten Cameroon in any AFCON tournament since its inception.

In recent times the Black Stars lost to the Indomitable Lions in the 2008 AFCON which was hosted in Ghana.

Cameroon defeated Ghana by a lone goal in that semi-final game which was played at the Accra Sports Stadium.

The last meeting was at the 2017 AFCON in Gabon where both sides faced off in the semi-finals.

Cameroon emerged as winners of that tie by 2-0 and went on to win their fifth AFCON title after defeating Egypt in the finals.

The Black Stars will have to break this jinx and record their first win of the competition to enhance their chances of qualifying out of the group.

Ghana drew their first game against Benin while the defending champions Cameroon defeated Guinea-Bissau by 2-0.

The Black Stars will be seeking for revenge after that painful exit in the 2017 tournament at the hands of Cameroon.

Referees for the Game

The 38-year old will be assisted by Mohammed Abdullah Ibrahim from Sudan and Gilbert Kipkoech Cheruiyot from Kenya.

The fourth official for the match is Mustapha Ghorbal from Algeria with Manuel Irenio Lopes Nascimento from Guinea Bissau as the match commissioner.

Below is the Starting Line Up for both teams

Both teams have arrived at the Ismailia Sports Stadium

We are just some few minutes away from kick off.

The two teams are on the field for the national anthem

Game is about to begin

01’- First goal kick of the game goes to Ghana .Ghana in possession of the ball as they pass it beautiful among themselves

Ghana on the attack Ayew, sends in a cross but has been saved by Onana

02’-  Quick throw to Bassogog, goes on a run but throw in to Ghana

04’- Andre Ayew has been clipped Referee whistles for a foul

05’- Free kick to Ghana, Nice ball to Jordan, he sends in a cross but has been intercepted by the Cameroonian defense.

07’- Chance for Ghana, Andre Ayew sends in a low cross but ball has been cleared. Corner kick to Ghana. Ball effected, oh no Adams fails to connect

08’- Chance for Ghana, oh no Adams blasts the ball wide in the six yard box.

11’- Bassogog with the ball tries to go pass Adams, Nice interception, throw in

12’- Atsu unleashes a shot but it goes wide. He goes down. Seems he can’t continue with the game.

14’- Bassogog on the attack but ball has cleared by Adams. Corner kick to Cameroon

Samuel Owusu comes in for the injured Christian Atsu

Chance for Cameroon but referee blows his whistle for a foul

18’- Cameroon possessing the ball as they string passes together, Ngadu fouled

19’- Clinton Nje with a beautiful control in the box, danger for Ghana but he fouls Adam.

21’- Cameroon dominating the game at the moment

25’- Corner effected, a drive by Samuel Owusu but it goes wide

27’-  Wakasu loses the ball, Cameroon on the attak, Nice Clarence

32’- Corner effected, Chance for Cameroon ball cleared they win another Corner kick. Ghana living dangerously at the moment . Threat has been neutralized.

34’- Andre Ayew is down with an injury

35’- Cameroon with a chance Nje, hits a strike but has been blocked by Ofori, Corner kick

38’- Samuel Owusu with a cross into the box, Andre Ayew prevented from heading the ball. Goal kick

39’- Onyo with a speedy run on the left wing sends a cross but ball has been saved.

41’- Baba loses the ball, Bassogog on the run, he shots but Ofori produces a beautiful save. Ghana left off the hook

42’- Cameroon with a lot of pressure on Ghana

A cross into the box, Ngadu heads the ball. Goal kick

43’- Anguisaa has been fouled by Wakaso, free kick to Cameroon

We are doing one minute of additional time

Referee whistles for the end of the first half

45’-Clinton Nje with the ball tries to go round Partey, Partey intercepts

46’- Ball still in possession of Cameroon, Baba has been fouled

48’- Referee whistles for a foul against Jordan Ayew

49’- Owusu with the ball sends a pass to Wakaso. He has been fouled

53’- Baba Rahman with a cross into the box. Andre strikes ball goes wide

54’- What a strike by Wakaso but it goes wide, misses the pole by inches

58’- Wakaso has been fouled

61’- Ayew on the run, but he has been brought down by Anguisah. Free kick

63’-  Samuel Owusu on the run, flanks in can he score oh no his shoot has been blocked

66’- Ghana in possession of the ball at the moment

67’- Cameroon reclaims the ball, they passing it beautifully among themselves

71’- Asamoah sends in a cross, ball goes over the line for a goal kick

73’- Asamoah sends in a low cross, nobody available to connect has been cleared

74’- Chance for Cameroon, Bassogog with  a strike, Jonathan Mensah puts his body in the line. Ghana left off the hook

75’- Ghana on the counter attack, Samuel Owusu on the run, can he beat his marker, good block from the Cameroon defender

77’- Asamoah Gyan has been introduced into the game, Kwadwo Asamoah comes out

78’- Wakaso picks possession but gives it away

80’- Chance for Cameroon but referee whistles for offside

86’- Adams clears the ball away for a throw in

87’- Kwabena Owusu hits the wood work. What a chance for Ghana

90’- We are doing three minutes of additional time

Referee brings the game to an end