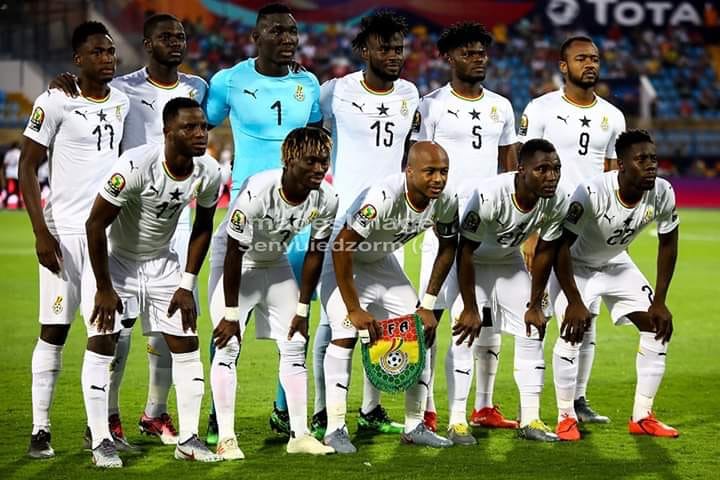 Re- LIVE Play-by-Play between Guinea-Bissau and Ghana in the final Group F game at the Suez Sports Stadium on GHANAsoccernet.com

The Black Stars will be searching for their first win against Guinea-Bissau in the tournament as both clash in the final group game today.

Guinea-Bissau held Benin to a draw in their second game on Saturday and will be seeking to upset the Black Stars and book a the next round if they are able to pick a win.

The Black Stars on the other hand will need a win or draw to book a place in the round of 16.

Experienced Gabonese center referee Eric Oyogo Castanets has been appointed by the organizing committee of the 2019 Africa Cup of Nations (AFCON) to handle the crucial match between Ghana and the Guinea Bissau.

Below is the starting line ups for both teams 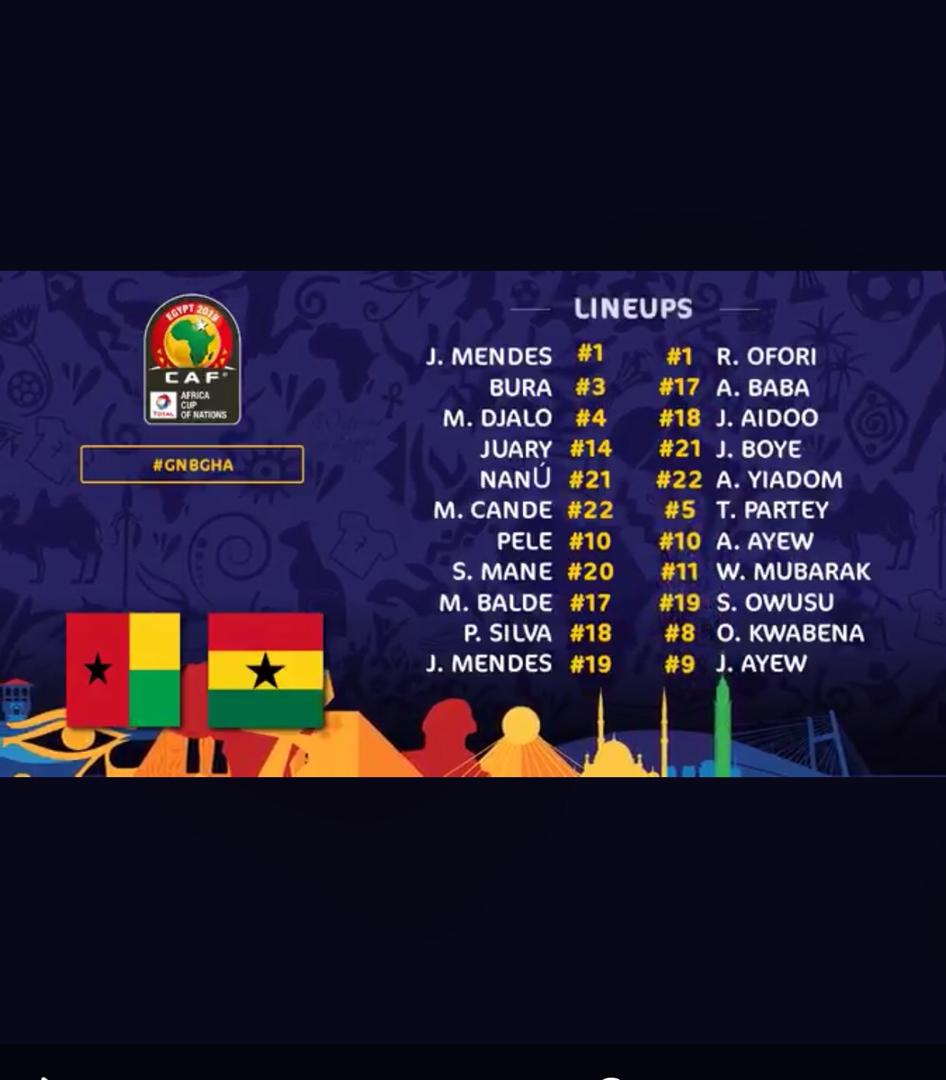 Both teams have arrived on the pitch with the national teams to be played.

The players are exchanging pleasantries

02’- First Corner kick of the game goes to Ghana. Ball effected by Jordan Ayew but has been cleared by the Guinea Bissau defenders

03’- Chance for Ghana as Samuel Owusu goes on the break, he sends a pass to Jordan Ayew but ball intercepted and cleared. Throw in

04’- Mama Blade is down on the pitch after colliding with Richard Ofori. Game on hold

06’- Yiadom losses possession, GNB on the attack, Wakasu with an interception, throw in

Wakasu has been fouled right after the thrown in

08’- Ghana dominating play at this moment. Wakaso with a long ball into the box goes wide. Goal kick

09’- Baba Rahman down after a challenge. Referee whistles for a foul

13’- Mama Blade with a cross into the box goes wide. Goal kick

16’-Baba Rahman with a strike but has been blocked

17’- Piquite with a strike it comes off the post. Ghana left off the hook

18’- Ghana on the attack, Owusu has been brought down but referee whistles for play on.

19’- Samuel Owusu with a some tricky, but his shoot is weak and cannot cause any trouble

21’- A challenge on Wakaso and referee whistles for a foul

23’- Free kick to GNB, ball effected has been headed out by Andre Ayew. Ghana on the break but ball goes out for throw in

24’- Another free kick to GNB, sends the ball deep. Goal kick to Ghana

26’- Wakaso with a long throw into the box. Andy Yiadom commits a foul.

29’- Yiadom fails to control a long pass ball goes out for a throw in.

30’- Samuel Owusu with a crosss to Jordan Ayew, but he fails to connect the ball

31’- Rahman sends in a cross ball has been headed out

34’- What a poor cross from Rahman

35’- Jordan Ayew’s effort hits the woodwork. Andre with the rebound but it’s the GNB defender.

40’-  A dangerous ball into the Ghana goal area, but it goes over the line for goal kick

44’- Partey with a strike, ball has been pushed out by the GNB goal keeper m

45’- We doing one minute of additional time

Ghana with a lot of pressure at the moment

Referee whistles for the end of the first half

We are back for the second half

Ghana  gets the second half underway

47’- Samuel Owusu on the run, he goes to ground in search for a penalty. Referee whistles for play on

48’- Jordan with another chance, he has been brought down but referee ignores

51’- Could this be the equalizer for GNB, but the ball hits the woodwork. Ghana left off the hook

54’- Partey with a strike but Mendez saves it

57’- GNB in control of possession

59’- Jordan passes ball to Rahman who tries to send in a cross but has been blocked.

Another Corner kick, ball effected, Oh no John Boye fails to make it out

61’- Wakaso with a nice cross into the box, Ayew connects but ball goes wide. Goal kick

64’- Corner kick effected and it hits the crossbar, Ghana on the counter attack, Jordan on the ball but he has been fouled.

Ghana with a substitution, Afriyie Acquah comes in for Kwabena Owusu

67’- Chance for Ghana, but referee whistles for offside

69’- Jordan Ayew on the break, plays a one- two pass with Partey but he fails to pick the final third

74’- Stars dominating the game at this moment

77’- A nice pass to Baba Rahman who surges forward can this be the third goal for Ghana.

79’- Another Chance for Ghana, Samuel Owusu on the break, he shoots but ball has been blocked

85’- Samuel Owusu hits a belter but it goes off the bar, goal kick

88’- Nanu sends in a cross it goes wide, goal kick to Ghana

We are doing four minutes of additional time

90- A chance for Ghana can Jordan Ayew make it count, good interception from the GNB defender. Ball has been cleared.

94’- GNB with a free kick probably the last kick of the game.

Referee whistles to bring the game to an end..

Thanks for staying us.