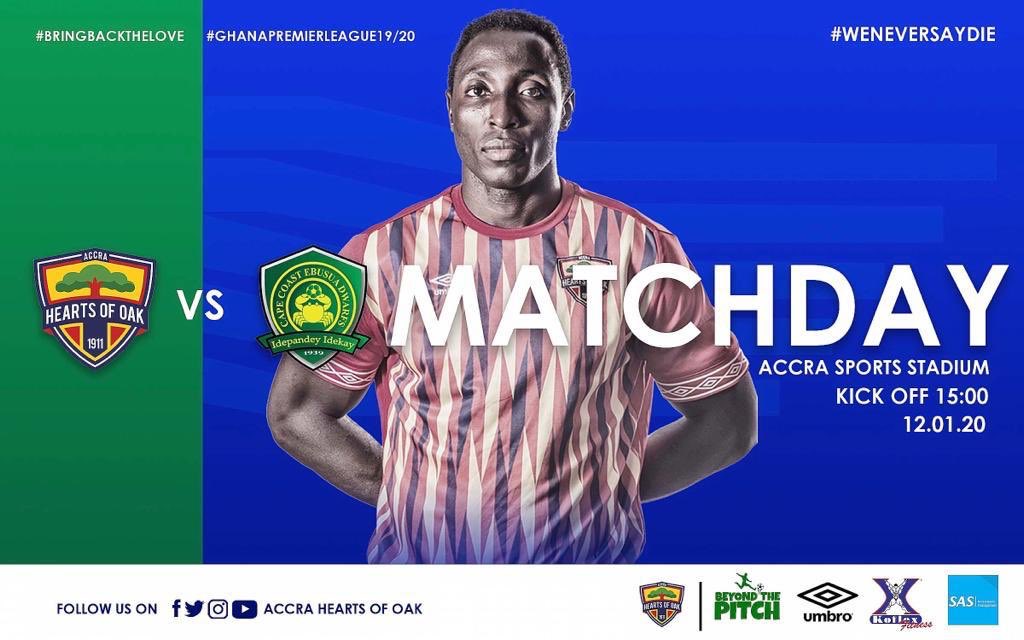 Hearts of Oak will be chasing their first win of the season when they host Cape Coast based Ebusua Dwarfs on Sunday in match day 3 of the Ghana Premier League.

The Ghanaian giants have had a poor start top the campaign after a defeat at home to Berekum Chelsea on opening day and an embarrassing 3-0 loss to Medeama on match day 2.

The Phobians are under pressure from fans to secure their first win and ease the pressure on coach Edward Nii Odoom, who replaced Kim Grant- the first coaching casualty of the season.

Former Dwarfs forward and Hearts of Oak's top striker Joseph Esso will have a lot to prove his former side but the input of youngsters Michelle Sarpong and Manaf Umar will equally be important for the Rainbow club.

Meanwhile, the Crabs are also having a difficult start to the campaign after defeat to Medeama SC on match day 1 and a 2-0 away loss to WAFA SC.

The Mysterious Dwarfs have netted a goal in the campaign with Hearts yet to score despite having one of the best attackers in the country.

Despite the struggles of the 20 times Ghana Premier League champions, Hearts of Oak have a good record against their opponents, having dominated duels against Dwarfs in recent times.

The Phobians were victors against Dwarfs in the NC Special competition, both home and away and will hope their supremacy over Ebusua Dwarfs continues.

Game underway at the the Accra Sports Stadium

Kwame Obeng Junior with a chance to make it 2-0 for Hearts  but his effort hits the bar.

Dwarfs left off the hook.

Second half underway at the various league centers

We continue our updates at in the Hearts vs Dwarfs game

51' Kwadwo Obeng Junior sends in a poor cross into the hands of the goalkeeper.

Chance for Dwarfs, Hearts of Oak goalkeeper parries the ball away. What a save by Richard Arthur

70'  Goal ooooo Dwarfs pull one back through Albert Ato Hammond