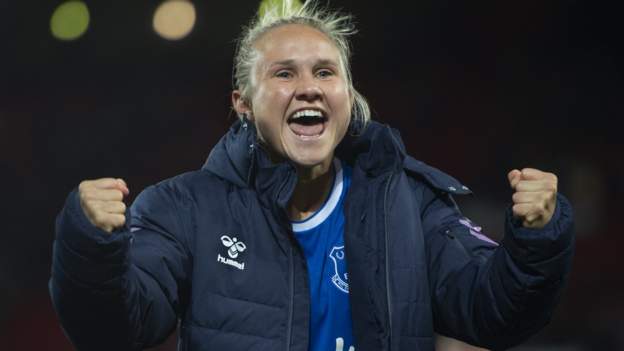 There is a good feeling back at Everton - and it is not just because they beat Merseyside rivals Liverpool in the Women's Super League at Anfield.

Sunday's 3-0 victory over the Reds was Everton's first win under new boss Brian Sorensen and, while it is still early days in his tenure, the club appear to have made big strides.

Last season was one to forget - they started it with ambitions to close the gap on the top four and ended it third from bottom with their third manager of the campaign.

But the derby victory was a statement from Everton that they are rebuilding on the pitch as well as off it, and there could be more to come in Sorensen's project.

"You have to give Everton credit. From watching them in pre-season I knew they were a good team," said Liverpool manager Matt Beard.

"They will surprise a few people this year. Their season is up and running now."

Dane Sorensen came to the club in the summer and quickly imposed his style on the team in pre-season, asking his players to be brave, creative and front-footed.

He moved defender Gabby George to a more advanced left wing-back position, while using Scotland international Lucy Graham on the opposite side, and both were impressive on Sunday.

In Everton's opening two games of the season they have controlled possession and set the tempo - and even though there were evident teething problems against West Ham, the game plan was delivered perfectly against Liverpool.

Sorensen also had a clear recruitment plan. He said he wanted to provide opportunities for England youth players who were competing for game time at their clubs, so brought in Manchester City's Jess Park and Chelsea's Aggie Beever-Jones on loan.

It has brought a good balance to the squad with a blend of experience and youthful talent and there is depth in several attacking positions.

But it is not only on the pitch that Sorensen and his staff have made an impact.

Players have spoken of the "relaxed" atmosphere created, while the implementation of "new ideas and cultural changes" has been praised.

"We work every day on the togetherness and the environment and I think that's brilliant. That's down to Brian as well."

A big part of that environment being built is Sorensen's aim to strengthen the connection the team have with their supporters.

He invited members of the official supporters club to meet him at the Liver building a few months ago where they discussed how they could help each other this season and, after their defeat by West Ham on the opening weekend, Sorensen took the time to speak with fans to gauge their opinions.

Earlier this summer Everton held an open training session at Goodison Park for fans to come and watch, and Sorensen vowed to work hard to show them a football style they would enjoy.

His call for fans to come out in numbers for the derby were answered too as Everton sold out their allocation.

"I could actually hear them in the game and this is what we said before to use our football to shut their crowd down," said Sorensen.

"Amazing crowd and I'm really happy to see them celebrate."

Everton's performance against Liverpool was impressive with Sorensen saying: "The way we did it is what I'm most happy about."

It has added fuel to a growing optimism around the club as Everton look to make their mark on the WSL again with performances like that against Liverpool.

So can they build on their progression and will the Merseyside derby victory be a catalyst for a momentum shift?

"I hope so. When you win games the confidence rises and the way that we did it feels good for everybody," said Sorensen.

"Let's enjoy this one then start to focus on the next one."