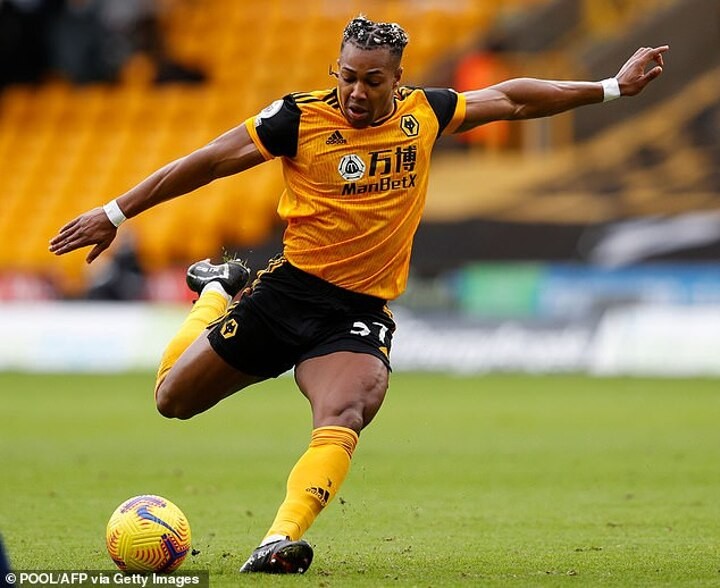 Liverpool and Manchester City want to sign Adama Traore but Leeds United consider the Wolves winger out of their price range, according to reports.

The Spain international has previously attracted interest from clubs across Europe, including Barcelona, due to his dribbling abilities and lightening speed.

According to Spanish outlet Sport, Liverpool, City and Leeds are the clubs most interested in making a move for the winger this month. However, Leeds Live claim the prospect of Traore moving to Elland Road is 'pure fantasy.'

Leeds' director of football Victor Orta signed Traore for Middlesborough in 2016 and previously described him as the 'most exciting prospect in Spain'.

Both Liverpool and City have been linked with Traore before and Sport claim that Wolves would want at least £35.5million.

Nuno Espirito Santo's side are short of attacking options and may be reluctant to let Traore leave without having a ready replacement lined up.

The club sold Diogo Jota to Liverpool in September and are currently without Raul Jimenez, who is still recovering from the fractured skull he suffered in November.

This has seen Traore deployed through the middle on occasions this season but he has struggled for goals.

The 24-year-old has failed to score in 18 Premier League appearances and has managed just one assist.

His only goal of the campaign came in the FA Cup against Crystal Palace.

Santo was full of praise for Traore at the end of 2020, despite his struggles in front of goal. The Wolves boss revealed the winger had been struggling with a foot injury since returning from international duty with Spain.

'My admiration for Adama is obvious. As a player, he is unique,' the Wolves boss said.

'He is fantastic and talented but unfortunately, he's been affected by problems, both in matches and during training.

'Since he returned from his national team, he has not been totally confident in training. He's had a knock on his foot. But he has shown a commitment to overcome the pain he feels and I'm immensely proud of him.'

Wolves are on a poor run of form in the league with just one win seven games. They were beaten by rivals West Brom on Saturday and face National League North club Chorley in the fourth round of the FA Cup on Friday.