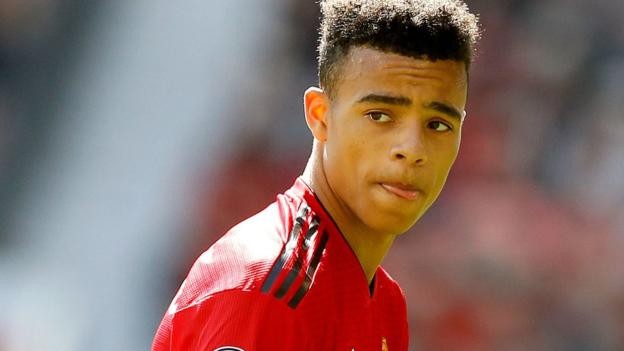 Teenage striker Mason Greenwood, who featured four times for Manchester United's first team last season, will be eligible to play in the EFL Trophy next season

Liverpool and Manchester United will enter Under-21 sides in the EFL Trophy in the 2019-20 season.

The pair are among 16 teams invited from category one academies, who will join the 48 League One and League Two clubs in the competition.

League One side Portsmouth won the EFL Trophy last season after beating Sunderland on penalties following a 2-2 draw at Wembley in March.

The draw for the group stage will take place in July.

The first round of fixtures is scheduled to be played in the week commencing Monday, 2 September.

Liverpool and United join Manchester City, Tottenham, Chelsea and Arsenal in the competition, with the Premier League's top six from the previous campaign represented for the first time.

Nicky Butt, head of Manchester United's academy, said the EFL Trophy "will act as the ideal platform for the development of our homegrown talent".

Fifteen of the 16 Under-21 sides who will participate are affiliated to top-flight clubs, with Championship outfit Fulham also involved.

Sides from category one academies were first introduced to the competition in 2016-17, with Chelsea's under-21 side reaching the semi-finals in 2017-18.

"The recent feedback from clubs and coaches has been very positive, with the current format continuing to offer greater revenue for our clubs and competitive first-team football for young talent," English Football League executive chair Debbie Jevans said.